At Year-End: Despite Statistics, Chabad on Campus Deepens Jewish Commitment 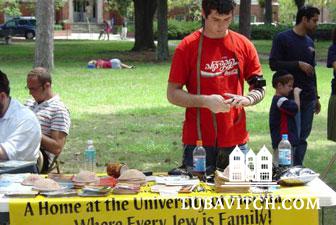 When Ethan Samuels clutches a freshly printed diploma in his hands in a few weeks, he will be among the tens of thousands of college students whose university years have been shaped through involvement in Chabad-Lubavitch on campus.

Attending a lecture at Chabad of University of Chicago supplied Ethan with a crucial piece of primary source material for his senior thesis on Middle Eastern Languages and Civilizations. Taking part in other Chabad activities demonstrated to Ethan how Jews can “take pride in doing what we have done for thousands of years with a lot of enjoyment and appropriate college humor mixed in.”

The sheer volume of students participating in Chabad programs is impressive. Shabbat dinners at Chabad of University of Western Ontario, Canada, attract 250 to 350 students each week. About 200 students flock to Friday night dinners hosted by Rabbi Berl and Chanie Goldman at University of Florida their Chabad center in Gainesville. Multiply these numbers by the scores of other campus Chabad Houses drawing upwards of 200 students every Friday night, and the 100 campuses served worldwide by Chabad, and programs like these are tipping the odds in favor of Jewish continuity.

But there are many more to reach. According to a 2006 report, “Particularism in the University: Realities and Opportunities for Jewish Life on Campus” published by the Maurice and Marilyn Cohen Center for Modern Jewish Studies at Brandeis University, 55% of Jewish college students spend no time involved in Jewish activities. A third of the rest are satisfied with one or two hours per week involved in Jewish campus life. Despite the popularity of the Goldmans’ programs, the rabbi doesn’t believe numbers tell the whole story.

“Our barometer of success and failure is totally unconventional because we don’t adhere to the world’s value system where statistics rule. We believe that one person and one deed can change the world.”

Chabad’s representatives focus instead on combating another finding of the Brandeis study:

How Chabad representatives go about being effective forces for Jewish life on campus, and beyond, is a matter of adapting to a particular college’s atmosphere, engaging them on a social level and exposing students to central elements of Jewish life.

At University of Chicago, ranked 9th among national universities (tied with Dartmouth College and Columbia University) by U.S. News and World Report in 2007, students are intellectual, driven and squeezed for time by the demands of the quarter system. To capture students’ attention on a campus where finals creep up every ten weeks, Rabbi Yossi and Baila Brackman feature guest speakers at several special Shabbat dinners throughout the year.

“We want people to know Chabad is a place where people can discuss important ideas and hear how Judaism views them,” said Rabbi Brackman.

A tribute to Milton Friedman, father of Reaganomics and a U of C professor who died in November, drew a packed house. So did a talk by Leon Kass chairman President George W. Bush’s Council on Bioethics.  At University of Florida, the 50+ members of the student board choose provocative topics for the semester’s lectures at Chabad. A “Roll Your Own” evening took on the Jewish view of recreational drugs and smoking. Next semester an evening on piercing and tattoos is on the schedule.

“These are topics that are relevant and interesting to Jewish students’ lives,” said Davita Mabourakh, the board’s president elect.

In addition to brain food, University of Chicago’s least affiliated Jews got a taste for Chabad, literally, during Jewish Heritage Week. Rabbi Brackman handed out cups of chicken soup in the heart of campus as a part of Kosher Day.

“It brought us a little more into the public arena,” the rabbi said.

At U of F, Davita saw many otherwise uninvolved Jewish students strapping on rollerblades, swinging away in batting cages and listening to a reading of the holiday narrative at Chabad’s Purim bash at Funworks Skate Station. Only 100 students were expected, but 300 showed up.

“People who wouldn’t necessarily celebrate a more serious holiday like Yom Kippur came to Purim and saw what fun it was, and made a good connection with Chabad,” she said. “Once people come for social reasons, they’re going to feel comfortable coming again for religious ones.”

Rabbi Mordechai and Nechamie Silberberg, leaders of Chabad at Western Ontario University, notice the same trickle up phenomena. Of the hundreds biting into warm challah at Shabbat dinner, a core of 65 stay to talk with the Silberbergs late into the night. As their massive Shabbat dinners grow to accommodate ever-larger groups of students, calls for more Torah study sessions increase.

Ultimately the true test of Chabad’s effectiveness on campus can be seen in the individual choices students make, the important ones that shape their lives. This past semester at Johns Hopkins University in Maryland, two couples met at Chabad and got engaged. Rabbi Zev and Chana Gopin threw themselves into hosting their engagement parties at Chabad of Johns Hopkins.

One student took in the tables laden with fruit platters and fancy pastries, the singing and dancing that was full of heart, was overheard remarking, “You know, I should find a Jewish girl to marry.”

The following links highlight some of our recent stories on Chabad Lubavitch campus activities.