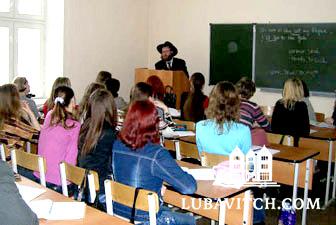 Ignorance is usually the context for the myths and misconceptions that foster a climate of suspicion and hatred. Nothing new here, particularly as concerns anti-semitism. But somehow, in the age of information, there seems to be no excuse for ignorance.

Three months after a local university student drove a swastika emblazoned knife into a tree outside the Ulyanovsk Chabad house, another student fell under suspicion for spray-painting anti-Jewish slurs on a bus shelter. In response to these acts of anti-semitism in the town Lenin called home, Chabad representatives chose to employ the power of education.

Before a packed crowd of 200, Rabbi Yossi and Suri Marozov blew the cover off misconceptions about Judaism to students of the Ulyanovsk branch of Moscow State University. Instead of embarking on a defense of Judaism, the Marozov’s talk began with Judaism’s understanding of the way all people – Jew and non-Jew alike – are valued.

“Jews and non-Jews have different roles to play in the bringing G-dliness to the world, much like the Navy, the Army and the Marines have different missions but are all essential,” said Rabbi Marozov. Describing the Seven Noahide Laws – universal do’s and don’ts from not killing to the establishment of just court systems – that Judaism spells out as incumbent upon all people elicited some looks of surprise from students.

World Religions Professor Sergei Peteroff, an authority of the history of Ulyanovsk’s Jewish population, had long discussed inviting the Marozovs to lecture at the college. The recent anti-Semitic vandalism perpetrated by university students encouraged Professor Peteroff to make the invitation official. He introduced Rabbi Marozov by referencing the most recent anti-Semitic occurrences.

“We all saw the ‘advertisement’ for the synagogue at the bus stop. Now we have the man from the synagogue to tell us what Judaism is all about,” said Professor Peteroff.

Questions from the audience revealed curiosity and misconceptions about Jewish life. One student asked if women were allowed to pursue careers. Suri Marozov, who taught for six years before moving to Ulyanovsk, described juggling work life, motherhood and the responsibilities of a Jewish woman. As a follow up, another student inquired whether Suri’s rabbi husband could grant Suri absolution from her mitzvah duties, much like a priest.

Students scribbled notes as Rabbi Marozov described Judaism’s approach to penitence. Though Jewish life in Ulyanosk dates back over 150 years, Chabad’s permanent presence began in 2006. Located across the street from the university campus, Chabad’s programs have been attracting notice and plenty of positive attention. At the invitation of the governor, Rabbi Marozov addressed 1,000 women gathered for Russia’s “Women’s Day” festivities in March. In the same month, on Purim, 400 people arrived at Chabad to listen to the megillah and celebrate the holiday. Local TV news included clips from the Purim event on the evening news.

Those broadcasts have also seen a growing number of reports on anti-Semitic acts, mostly vandalism, across Europe. Shattered glass at the Lauder Chabad School in Vienna last year and a smoke bomb thrown through a Chabad-run school in Berlin in February are but two incidents that have Chabad representatives reaching out to the wider community.

“I hope that when they see the beauty of Jewish values the students will see that spray paint and propaganda are foolish,” the rabbi said.