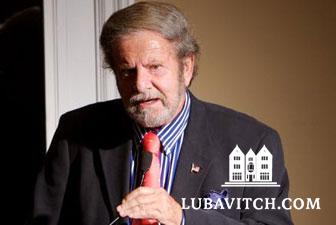 Tad Taube, President of the Koret Foundation, speaks at the dedication of the new Rohr Chabad House. (Photo: Steve Maller)

When he first met Rabbi Dov and Rachel Greenberg, Amichai Magen doubted that he, a self-described “Yitzchak Rabin Fulbright Scholar who grew up in the secular, Zionist heartland, would have much to do with the Chabad.”

Speaking before a diverse group of 200 assembled from a broad swath of the university community, Magen, the event Co-Chair, a JSD candidate and lecturer at Stanford Law School, said that instead, he found Rabbi Greenberg to be a man of “not only great intelligence – but something far rarer in this world: goodness combined with genuine wisdom.”

Those sentiments were echoed by others—among them faculty members, Stanford residents, graduate and undergraduate students who participated at the gala opening of the Rohr Chabad House at Stanford University on Wednesday.

Bay area philanthropist Tad Taube, was honored at the event, as Rabbi Dov Greenberg announced the dedication of the Taube Institute for Jewish Studies.

“Tad Taube has been one of the pillars of Chabad at Stanford and its growth,” said Rabbi Greenberg.

Philanthropist George Rohr, whose Rohr Family Foundation has provided ongoing support to Chabad at Stanford since its inception five years ago, delivered greetings and congratulations via video.

Chabad at Stanford is only five years old, but the Greenbergs have made a substantial difference to the university’s Jewish student body of about 2000 in these few years, earning the recognition of Stanford Dean for Religious Life William L. “Scotty” McLennan, Jr., who spoke at the inauguration, praising Chabad as a warm, creative force on campus.

"Rabbi Dov Greenberg has been a dynamic and creative advisor for this organization, who I’ve very much enjoyed getting to know personally, along with his wife, Rachel," said Mr. McLennan. " I’ve been particularly impressed by the positive relationship between Chabad and Hillel on this campus and hope that will continue to grow and deepen over the years."

Matt Pellow, a Ph.D student who spent more than a few Shabbat meals with Chabad returning to experience their “welcoming hospitable ambiance,” adjusted his schedule at the inorganic chemistry lab so that he could take part in the event and celebrate Chabad’s growth from its “temporary landing pad” to “a real stable home.”

It is precisely the success of the Shabbat meals that drove the Greenbergs to seek expanded quarters. Their former center could seat 45, leaving some “standing out on the porch” during Chabad’s popular events and classes, said Rabbi Greenberg. The new space easily accommodates 100. Located about a half mile away from campus, it’s just the right distance from the buzz and pressures of university life.

“It’s an escape to go there,” said event Co-Chair Jennifer Chernick. Now, said Chernick, a sophomore majoring in History, “Chabad has a fantastic building, a great physical presence” that equals its impact on Jewish life at one of the world’s premier universities.

Related Articles
View All
“Chabad At Stanford . . . Knowledge, Courage and Commitment”
In retrospect it seems highly symbolic – even poetic – to me that I first met Rabbi Dov Greenberg when he was busy assembling a…
Get Inspiration to your inbox!
Newsletter
Join our weekly newsletter for inspiration and updates
Donate
Find Your Local Chabad Center
Subscribe
|
Log In
Chabad
About Chabad-Lubavitch
About Chabad Lubavitch
The Rebbe
Headquarters
Magazine
Magazine
News
News & Updates
In The Media
Impact
Social and Humanitarian
Social and Humanitarian
Education
Education
Community
Community