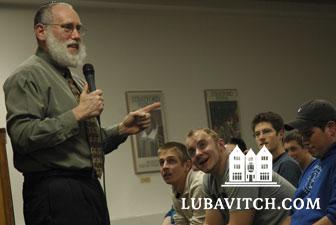 Whatever their proselytizing techniques, Messianic Christian missionaries were once easily fingered as outside the pale of Judaism. But times have change, especially in Fort Collins, Colorado.

On Saturday afternoons, Messianic missionaries, among them both Christians and Jews who believe Jews complete themselves by accepting Jesus, can be seen strolling around in their Shabbat best: yarmulkes on their heads, tzitzit strings dangling from their waists, and women with scarves covering their hair. Their spiritual leaders wear full beards, and, in the tradition of certain Chasidic communities, they grow long payos—sidelocks. The blurring, the deception got to the point that Jewish community members would ask Chabad of Ft. Collins’ Rabbi Yerachmiel Gorelik: “We know people who look just like you. Are they your friends?”

Jewish students at Colorado State University are a particular target of Messianic missionaries, and to the Chabad representative building a Jewish infrastructure in this new frontier, setting the record straight is of critical importance.

"Jesus was a Jew: But Can a Jew be for Jesus?" was the title of a January 18 lecture at University’s Lory Student Center that drew some 80 college students and community members who wanted to learn about the motives and the means of Messianic missionaries. Sponsored by the Chabad Student Alliance at Colorado State University, the lecture by Rabbi Bentzion Kravitz, author of The Jewish Response to Missionaries and founder of Jews for Judaism International, an organization that works to counter missionaries, was open to the messianics as well. “They didn’t show up,” says Rabbi Gorelik, not surprised.

Rabbi Kravitz, who brought 20 years of experience dealing with cults and missionaries, spoke to the audience about the claims of Messianic missionaries and illuminated the fallacies and misrepresentations they use to lure innocent Jews. “I look to strengthen the Jewish students’ sense of commitment to Judaism so they do not feel intimidated to stand up for themselves,” said Rabbi Kravitz. For those in the audience who feel a need to proselytize, or who might not understand what’s wrong with proselytizing, Rabbi Kravitz explained why deceptive practices to convince Jews to convert is manipulation, not spiritual enlightenment.

Ft. Collins is home to one Messianic congregation with about 100 members. Looking very much like a synagogue, Adat Chaim, which espouses faith in Jesus as the messiah, has Shabbat and other traditional services that appear deceptively Jewish. Its leader, Vern Meyer, looking very much like a rabbi, says he'd like to see his congregants be accepted as Jews by the larger Jewish community. "But you cannot claim to be Jewish and insist on belief in Jesus," says Rabbi Gorelik. "It is a theological contradiction and to call oneself a rabbi and to dress as a rabbi without being ordained is deceptive."

According to Dr. Neil Dobro, director of Colorado Jews for Jewish Identity, they are not the only ones attempting to proselytize. Christian evangelicals have strengthened their efforts to convince Jews to believe as they do. According to Rabbi Kravitz, a convention held in Washington D.C. attracted 800 evangelicals to a seminar that detailed how to convert Jews. With over 70 million evangelicals in the United States, proselytizing is no longer the aim solely of professional missionaries but it’s a goal of “your kid’s baseball coach, your co-worker at the next desk, the guy on the train and the parents of your kids’ friends.”

Sometimes the conversion attempts are not so subtle. When Dan Croll, 21, crosses the CSU campus, he often passes a “guy standing on a rock and yelling that the path to righteousness is only through Jesus.” A survey of 1800 Jewish Californian teenagers conducted by Jews for Judaism found that 68% had been approached by missionaries. Among college students, the incidence of proselytizing climbed to 85%.

Colorado State University junior Elliot Antman, a speech communications major, said he has been approached at least four times by evangelicals on campus. When Antman shrugged him off, the fellow, a member of the Campus Crusade for Christ, whose website contains first person stories of Jews who accept Jesus, replied that he was not proselytizing and wanted “just to ask me a few questions” and let Antman know “everyone is welcome at the campus church.” Antman, a drummer in the reggae-jazz-rock-fusion band Modus, brought some of his non-Jewish band mates to the event.

Messianic Jews have been attempting to infiltrate Chabad of Ft. Collins since its establishment two years ago. “When I first moved in, they wanted to be my best friend to give them legitimacy. They need me for information, to teach them about Judaism so they can continue their deception,” said Rabbi Gorelik. When Chabad hosted a Hebrew language course, members of the Messianic congregation signed up en masse. They attempt to join Chabad’s holiday programs. “They’ve been very tricky.”

Colorado has over 17 Messianic congregations. In an infamous episode, the daughter of Ft. Collins’ Messianic “rabbi” moved to Denver with her husband and posed as a newly observant Jew to gain acceptance. California, especially in the 1970s, was a hotbed of Jews for Jesus activities, and Chabad was then and remains at the frontlines of fortifying Jewish students against their attempts. Chabad of USC hosted Rabbi Kravitz last year.

According to Yad L’Achim, an Israeli anti-missionary congregation, an estimated 10,000 Jews, many Russian immigrants among them, are involved in 40 Messianic congregations in Israel.