A New Home for One of FIU’s Largest Student Organizations 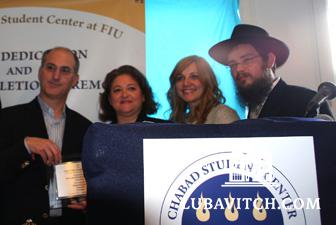 Moshe and Lilian Tabacinic with Sashie and Rabbi Levi Friedman

Once the bane of Jewish continuity, today, with the proliferation of Chabad campus student centers,  Jewish students going off to colleges and universities stand a good chance of actually growing in their religious identity and commitment.

With a few swift taps of a hammer Chief Rabbi of Israel Yona Metzger affixed the mezuzah yesterday, Sunday, on the new home of Chabad Jewish Student Center at Florida International University. The new “Tabacinic Chabad House” is named in honor of the internationally known philanthropist Moshe and Lillian Tabacinic of Bal Harbour, FL. “We are eagerly anticipating that our new home will take our programs to a whole new level,” said Rabbi Levi Friedman directer of ChabadFIU.

Once several miles and a few tricky turns away from campus, ChabadFIU’s newly renovated 3,000 square foot home is within walking distance of the dorms. FIU President Modesto A. "Mitch" Maidique told the overflow crowd of 200 that he knew students felt at home at the Rabbi's home and he wanted the Rabbi to know that the presdential house, “our home, is your home as well.”  Bringing a sense of "home" to FIU’s commuter school image has been a focus of President Maidique’s tenure. It was clear from the President’s lively address that he saw Chabad’s Rabbi Levi and Sashie Friedman as FIU’s partner in this mission.

Highlighting the event was the completion and dedication of a new Torah scroll, donated to the center by New York executive Mr. Mendel Fischer.

Students, parents and guests were visibly moved as they were honored with inscribing a letter in the new Torah, and later danced under the Miami sky as the Torah was brought into the new center.

In a surprise announcement, Rabbi Friedman announced the establishment of a new Judaic Lending Library which will serve FIU students and faculty. The project is now underway and is dedicated in memory of the late Rabbi Gedalya Schaffer by his family in New York.

Aaron Margolis, ChabadFIU Student President, noted that Chabad is “by far one of the largest student organizations on campus.”  By the numbers, over 500 students participated in Chabad events last year, ranking it second only to the FIU Student Almuni Association’s 1900. Chabad is also one of the very first student organizations to purchase a home specifically for activities so close to the FIU campus.

Of the 38,000 students attending FIU, an estimated 3,000 are Jewish. According to Nina Dardashti, Chabad’s presence at FIU made her include it on her choice of colleges. That was a big factor in my decision,” said Nina, an international relations and hospitality major. Before she transferred from Drexel University, she emailed the Friedmans “because I was looking for a school that had a strong Jewish group on campus.”

Google linked Sarah Steinfeld to ChabadFIU. “My spiritual journey began a long time ago, but I didn’t feel comfortable at typical Jewish organizations, especially religious ones.” Good experiences at Chabad of S. Diego State University convinced Steinfeld to give Chabad FIU a call. Even though it was summer, and Chabad’s regular student Shabbat get-togethers were on hiatus, the Friedmans invited her to spend Shabbat with them at their cousins’ home. “People just feel comfortable at Chabad for all different reasons.”

The crowd at Shabbat dinners has shown Aaron Margolis the authenticity of ChabadFIU’s welcome. Students researching religion papers regularly show up to sample the gefilte fish and quiz Sashie on the role of women in Judaism. Margolis feels obligated to explain to the multicultural guests that it’s not the norm for a congregation to “come over and party with the rabbi after services. This is not the case here.”

FIU students speak a Babel of 146 languages. Some, said Margolis, are surprised to find “that Jews are still around” and not dusty characters inscribed in scrolls of ancient history. With a new home at FIU and a new Torah, Chabad is poised to keep the story line of Jewish students very much in present tense.