From South America to New Jersey for An Authentic Yeshiva Experience 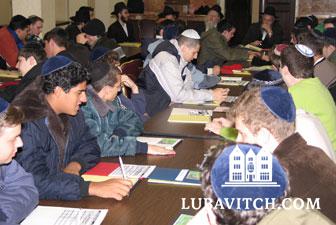 Instead of the beaches, South Americans hit the texts at the Rabbinical College in New Jersey. For more, click on image.

Adult education assumes a significant place in the outreach activities of Chabad centers around the world. But it’s not quite the same as the total immersion yeshiva variety, which many have never experienced. Towards that end, the Rabbinical College of America developed a six-week steeped-in-the-texts program that gave South American Jews a taste of the experience.

The group, a mix of lawyers, university students, and budding entrepreneurs, ages 19 to 30, flew northward to Chabad’s centers of higher learning for an experience as rare as finding a tanned New Yorker in December: serious Jewish study tailored for adults with limited Jewish educational backgrounds. “The South American student exchange program has revealed the expanse of the Rebbe’s vision and the potential of the College to achieve a mission of notable international dimension and consequence,” said Arnold H. Chait, a prominent New Jersey attorney and RCA Trustee. “We welcome with unbounded enthusiasm and excitement, our visitors from and future emissaries to South America.”

“They came because they wanted a real learning experience,” said RCA Dean Rabbi Moshe Herson, “But South Americans are very fun-loving people, so we’ve planned a very rewarding few weeks here.” Trips to Washington, D.C., Niagara Falls and Manhattan are intermingled with the study sessions throughout the six-week study-vacation. At RCA, the South Americans are staying in newly refurbished dorms and have school chef Dovid Solomon cooking abundant meals for them. Arrangements with the local JCC were made to give the guys gym and pool access in the afternoons, and due to the unseasonably warm weather there have also been a few soccer games played on RCA’s 82-acre grounds.

Andre Jerusalmy, a law school student from S. Paulo, Brazil, enjoyed seeing America’s historical monuments and the big city lights of New York, but he is more invigorated by the yeshiva atmosphere and studying Torah. “I want to stay a bit more here in the yeshiva to study more and more Talmud and improve my legal English that I will use in my professional life. If I don’t stay longer, I will go back to Brazil and be a better Jew, for sure.”

The exchange student project was a cooperative effort of  the administration and faculty of the RCA, Chabad of Brazil’s representative Rabbi Dovid Weitman, Chabad of Argentina’s Rabbi Shlomo Levy.  Last March, Argentine students were offered a free trip to the U.S. yeshiva as an incentive to stay committed to their routine of studying twice a week at Beit Chabad Palermo – University Student Center. “They were preparing for this trip through study,” said Rabbi Shlomo Levy of Beit Chabad Palermo.

Chabad representatives across Brazil handpicked their country’s group. Limited slots for the deeply subsidized trip obligated the rabbis to pick “the best of the best, the most serious about their spiritual growth,” said Rabbi Mendy Weitman of Chabad S. Paulo, Brazil. One student was selected from the only known Jewish family living in the northeastern city of Natal. Several Brazilians who signed on for the six-week trip are planning to extend their stay through April.

At Rabbinical College of America, lecturers fluent in Portuguese and Spanish were rounded up to teach students who did not speak English. Those who did were integrated in the existing classes, who were starting a new subject. Tri-lingual workshops on Jewish scribal arts and the creation of ritual objects, like Tefillin, were conducted throughout the stay. RCA’s smattering of Brazilian and Argentine rabbinical students have included visitors from their homelands in their study sessions and spend their downtime making the newcomers feel comfortable.

Unbeknownst to the South Americans, they have a lot in common with the RCA Dean. Born and raised in Rio de Janeiro, Brazil, Rabbi Herson, then known by his first name, Mauricio, made a similar journey to study in a Lubavitch yeshiva in New York at age fifteen. He stayed, received his ordination, but never forgot classic Carnaval tunes, which he sang to the Brazilians. Warm chuckles resounded.

Since its establishment in 1956, RCA counts hundreds of students from 24 states and 18 foreign countries. Overlapping the South American’s stay was a group of 30 American college students on campus for the annual ten-day “Yeshiva Winter Program,” where ABC’s of Judaism are lecture topics. According to Director of Admissions Boruch Hecht, on Friday, when yeshiva, college and South American students joined for Shabbat dinner, toasts and stories were shared in three languages and “everyone felt at home.”