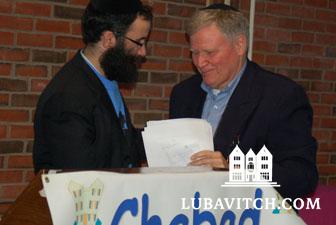 Barry Shrage, President of Boston’s CJP, with Rabbi Perets Chein at the dinner.

A paradigm shift for Chabad of Brandeis, the idea of offering eight innovative courses for students to choose from, was devised by Rabbi Peretz and Chanie Chein who did not want Brandeis University students to become “victims” of their center’s success.

With Shabbat dinners drawing an average of 140 students per week, the Cheins wondered how they could possibly continue spreading the one-on-one warmth that made their campus Chabad House so popular in the first place. Coupled with a goal of helping Jewish students become better informed about their heritage, the Cheins came up with an interesting experiment.

Over the past semester, students could participate in any of the courses they'd offer over an eight week semester: Jewish Learning Institute’s Jewish Essentials, Talmud, “You and Him,” on male-female relationships for women only, and the very popular “Why and What?,” an examination of Jewish practices and their meanings.

Teaching is of course, part of the bread and butter of campus Chabad Houses, but this experiment would come with responsibilities. For a nominal fee (scholarships were made available) students who enrolled would then form a more intimate group that would join the Cheins for Shabbat dinners on alternate weeks. The smaller crowd would allow the Cheins to connect with the students on a more personal level.

Alison Schwartzbaum, president of Brandeis’s Student Union, appreciated the idea of alternating between small Shabbat dinners and the massive meals. “Shabbat is supposed to be the restful break from the hectic week, but it's really hard when Shabbat is so big. At the same time, those big Shabbats are so important to do outreach to the community. I really like the balance.”

Jacob Baime, an American Studies and History major, was among the 80 students attending the courses, a number that far surpassed the Cheins’ expectations. Baime chose the course on the deeper meanings behind the lyrics of Matisyahu, the Chasidic reggae superstar, and he really grooved on the smaller Shabbat dinners.

“The difference was that the people at those Shabbat dinners were committed on a different level,” he said. And yet, Baime says, there was always a sprinkling of new faces at the smaller Shabbat dinners.

“There is always a sense that you are welcome at Chabad. I don’t think anyone can imagine Chanie and Peretz turning away anyone who wanted to come to Shabbat.”

In surveying the students’ reactions to the courses, the feedback was overwhelmingly positive.

Sharon Shrago wrote, “I loved every part of the ‘You and Him’ class. My only suggestion would be to perhaps make the class a bit longer every week.”

Prior to the classes, Julia Gordon, a senior weeks away from graduation, had been studying privately with Chanie. Attending a class added a dimension of community whose “exchange of ideas” enhanced Gordon’s appreciation of the topic.

As Barry Shrage, President of Combined Jewish Philanthropies of Boston, delivered the keynote address at the dinner, Daniel Lorch, a graduating senior from Rio de Janeiro, looked around at the diverse crowd.

“There were people there you wouldn’t imagine interacting with, with different styles and majors, but it didn’t matter. We were all there to learn more about Judaism.”

Students received a souvenir t-shirt that delivered a Chabad of Brandeis take on the iPod silhouette and bore the slogan “iLearn.” Baime, who made time for Chabad’s courses alongside his work on Guiliani’s presidential campaign, is planning to wear it.

“With all I do, it is important for me to have grounding in Judaism and nurture my Jewish identity, and Chabad is the place to do that on campus. It is a beacon of real Jewish learning and Jewish life.”