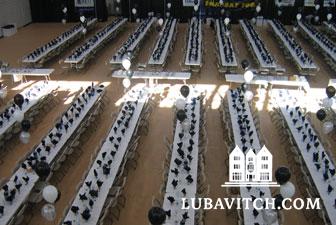 Friday night Shabbat dinner offers an excellent opportunity to expose people to Jewish life. That's why Campus Chabad Houses typically host 200 or 350 students weekly, at Friday night dinners. The dynamic is different when colleges get together to bring the experience to 1000 students or more, at once.

There was no microphone at the Carnegie Mellon’s Weigand Gymnasium last Friday evening, and those responsible for the plans to host 1000 college students for a three hour Shabbat dinner knew there’d be none. The planning committee anticipated other logistical snags, especially as they aimed  for a traditional, Shabbat "family" dinner with an ambience that is intimate, where the food is kosher, home-cooked style, and everyone wants to linger round the table.

But that’s very much what 1100 (1300 according to the caterer’s count) of them experienced at the second annual Shabbat for 1000. “The Shabbat atmosphere was pretty amazing. The location and the space worked for us since everyone could fit in the gym and be with so many people at one time for a shabbat meal," says Sam Krichevsky, a senior at the University of Pittsburgh.

The event, months in the making, was a collaborative effort by Chabad House on campus, student organizations of University of Pittsburgh and CMU, Hillel Jewish University Center, and individual community donors. Participating students came from area colleges including Carlow, Duquesne and Chatham, Point Park College and Community College of Allegheny County.

Mrs. Sara Weinstein, director of Chabad of Pittsburgh University with her husband, Rabbi Shmuel Weinstein, told Lubavitch.com that the event “was really about giving as many students as possible—both Jewish and non-Jewish, the opportunity to have a Friday night Shabbat experience.”

"In this week's Torah reading," Rabbi Weinstein said in his opening remarks, "the Jewish people are commanded to 'remember the day of Shabbat and keep it holy.'"

So learning from Chabad's Shabbat 1000 of last year, which topped off at 750, and from other Chabad campus pros who've developed a method to the madness in executing such an event, (complicated by the halakhic constraints of Shabbat), Chana Weinstein, program administrator, left little to chance.

Every table had a student host, which meant that friends sat together creating a more intimate feeling, and improvisational techniques like raising signs—“Laugh,” “Cheer” or “Quiet”—to keep those who may have been out of earshot plugged into the program, were both amusing and effective.

It was indeed the largest Shabbat dinner ever in Pittsburgh, with a turnout worthy of the Mayor’s participation. At a young 27 years old, Luke Ravenstahl, who stepped in after the city’s former Mayor Bob O’connor died last year and is easily the contemporary of some of the graduate students who participated, said, "I'm honored to be here and be part of it . . .  it's a very impressive tribute to the effort and attention of the Jewish community."

Many of the students had attended last year’s Shabbat event and had come back with friends. Others were experiencing Shabbat for the first time, in particular, the non-Jewish students who attended. "The biggest success was the increased support for Shabbat 1000 from students this year. A lot of my friends were asking about it because they wanted to come back after last year's event. I'm not only proud of our numbers expanding, but also that people were so eager to return." Rachel Jones, a junior at the University of Pittsburgh and a member of the planning board told Lubavitch.com

Those on the planning board, says Sara Weinstein, are still amazed at how smoothly it went, despite early setbacks.

Funding for the event was drastically cut by the University of Pittsburgh Student Government. “Last year they gave us $7,000, and this year, $700,” she says disappointedly. The local Jewish Federation too, says Sara, came in at almost 50% less than what they gave for last year’s Shabbat event. At the same time, expenses were much greater. “Last year, we aimed for 500 students, and had 750, this year, we aimed for 1000 and had upwards of 1100.”

But Carnegie Mellon student organizations came in with $5,000 and individual donors filled in to make up for the shortfall. “We really weren’t willing to cut corners and serve cold food or packaged food.”  In fact, she points out that because the CM kitchen could not accommodate a kosher dinner for this many people, the food was cooked offsite, and “we had the caterer purchase new oven warmers which were brought to CMU’s kitchen to keep the food hot.”

The food was delicious, say the students. Max Gelman, a junior at the University of Pittsburgh was exuberant: "The chicken was awesome! The food really had that homemade taste that Chabad House is known for." And because Chabad at the Unversity of Pittsburgh prides itself on being "the warmest place away from home," guests were hosted in the most personal way: Rabbi and Mrs. Weinstein, Rabbi Shua and Shoshana Hoexter, responsible for Chabad’s graduate student programming at University of Pittsburgh, and Mrs. Fraydi and Yosef Silverman, community partners for Chabad House, spent the evening working the room, making sure that students were comfortable and feeling right at home.

Tomorrow, says Sara Weinstein, the Shabbat 1000 Student Committee will meet to review the event and peruse the student surveys that were sent out to all participating students. "We'll take notes and begin to think about next year’s Shabbat."

Billed “Shabbat for 1000,” Rabbi Weinstein is thinking of renaming it "Shabbat for 1800." The responses coming in so far suggest that the numbers will in fact, be much higher. "I've gotten a lot of positive feedback from students who were there," Sam Krichevsky says. "I look forward to next year's event being even bigger and better.”