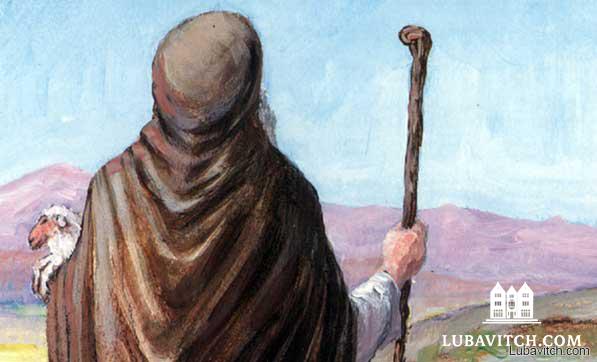 Moses cares even for the small sheep, as an example for leadership today, a detail from a painting by Zalman Kleinman.
Photo Credit: Kehot Publications Society

Today, Wednesday, marks the passing of Rabbi Levi Yitzchak Schneerson (1878-1944), chief rabbi of Dnepropetrovsk, Ukraine. A great scholar, he developed a unique approach to commentary on Jewish classical texts such as the Torah, Talmud, Kabbalah and Chasidism. He is remembered for his leadership, standing up fearlessly to the Soviet authorities who sought to suppress Judaism in the communist empire. He is also remembered as the father of the Lubavitcher Rebbe, Rabbi Menachem M. Schneerson, the greatest Jewish leader of the 20th century.

To mark this occasion we present an essay on leadership.

Sixty years ago, in a discourse on a Shabbat afternoon, the Rebbe, Rabbi Menachem Mendel Schneerson, cited the Zohar’s interesting analysis of three biblical leaders: Noah, Abraham and Moses.

Each of them lived at a time of great moral crisis, and each in his own way, was charged with leading their respective communities (see Zohar Noah 67b and Vayeira 106a).

Informed by G-d that He was going to unleash a flood that would destroy most of humanity, Noah followed G-d’s instructions to build a large, covered ark so that he and his family would be protected during the devastating flood. Glaringly absent is Noah’s concern with the welfare of the larger community. Only when others paused to ask him why he was building an ark, did he take the opportunity to advise them of the impending flood, and urge them to repent of their evil ways so they would be spared.

His words fell on deaf ears. Noah’s leadership is marked by his failure to care for the broader community. The flood, which destroyed the rest of humankind, is thus named “Noah’s waters” (Isaiah 54:9).

Abraham, on the other hand, didn’t wait for inquiring minds seeking redemption. He preempted them. He reached out to society at large. “And he (Abraham) called out there in the name of G-d the King of the universe.” (Genesis 21:33). Abraham worked tirelessly to convince a pagan culture of his newly discovered monotheism, and he succeeded to inspire former heathens to become righteous individuals. And when the peril of destruction dangled over the inhabitants of Sodom and Gomorrah, Abraham pleaded with G-d to reverse his decree. In an eloquent confrontation recorded in Genesis, Abraham argues with G-d to spare the cities on the merit of their righteous inhabitants, few though they were. Alas, G-d informs him that he could not find any. Abraham rests his case and returns home. Abraham tried to make a plea, but only on behalf of the righteous.

In contrast, when G-d threatens to eradicate the Jewish nation following the sin of the Golden Calf, Moses pleads for forgiveness—even for those who failed the test of faith and committed the sin of idolatry. Realizing that he could offer only a poor defense of a sinful population, Moses puts his life on the line for his people: If G-d will not agree to forgive them, he insists, then “Please erase my name from Your book that You have written” (Exodus 32:32). Moses, servant of G-d, threw his lot in with the people. And, indeed, he died in the desert, with his flock, and never entered the Promised Land for which he had deeply longed so much. Thus Moses’s leadership is described by the Zohar as a model of perfection.

The Talmudic tractate of Horayoth (10a,b), relates the following episode:

Rabbi Gamliel, the leader of the Jewish people in his time, wanted to appoint two of his brilliant students to leadership roles in the community. The two were Rabbi Elazar Chismo and Rabbi Yochanan ben Gudgeda.

He summoned them to come meet him, but they didn’t show up. So he summoned them again. They realized that it would be dishonorable not to accept a second invitation so they came before Rabbi Gamliel.

My dear sons, said Rabbi Gamliel. I know why you refused my first invitation. It was because you knew that I was going to confer upon each of you a leadership role in the community. Because of your abounding humility you sought to shun the honor of the new respectable positions.

But in fact, the position of leadership in the Jewish community is not one of power. It is a position of servitude! You must be genuinely and totally devoted to the wellbeing of the people you will serve.

A true leader, said the Rebbe, must selflessly put aside any personal interests when confronted with adversity, and be concerned only for the community and for the people who place their trust in his leadership.

Moses’s devotion, concluded the Rebbe, exceeded that, for even in death, he remains with his flock: his resting place is in the desert, in the very location where the generation of the calf worshipers perished.

The Rebbe forfeited a life of quiet scholarship, he sought out his brethren around the world with extraordinary love. “We dare not rest until every Jewish child, girl and boy, receives a proper Jewish education,” was one of the Rebbe’s recurring themes.

How fortunate we were to be witness to the Rebbe’s leadership model: unconditional giving of self all the days of his life, relentlessly seeking out every lost soul and restoring the dignity, the spirit and pride of a broken and beaten nation in the post-Holocaust years.

The number of people who come to pray at the Rebbe’s resting place grows year to year. Like Moses, even after his passing, the Rebbe continues to sustain and nurture a nation towards redemption.

Rabbi Yehuda Krinsky is the chairman of the Chabad-Lubavitch Educational and Social Services.

Related Articles
View All
History
Who Was the Lubavitcher Rebbe’s Father?
(lubavitch.com) Every now and then, the world is blessed with a leader of such rare character as to inspire a following that seems to outlive…
The Rebbe’s Father: The 70th Yahrzeit
Jewish communities worldwide will this Shabbat (20 Av) be marking the 70th yahrzeit of Rabbi Levi Yitzchak Schneerson (1878-1944), the father of the Lubavitcher Rebbe,…
Knesset Reflects on Rebbe’s Legacy
On the occasion of the 21st yahrzeit of the Lubavitcher Rebbe, Rabbi Menachem Mendel Schneerson, opposition leaders gathered in the Israeli parliament to salute the…
Roundtable Repost: The Rebbes and How They Shaped Chabad
Chabad-Lubavitch traces its roots back to the last decades of the 18th century with its founding by Reb Schneur Zalman of Liadi. Many traditionalists within the…
REVIEWS: Trying To Grasp the Rebbe
To one biographer, he was a world leader who shaped a worldwide movement; to his student, the Rebbe was a tzaddik, a personal link to…
In Conversation: Rabbi Yehuda Krinsky
Rabbi Yehuda Krinsky was secretary to the Lubavitcher Rebbe, Rabbi Menachem M. Schneerson, for a period of 40 years. As a young boy of 13,…
Editorial
Memories of Sukkot 1991
Sukkot 1991 was different. The crowds were enormous. But this time, the Rebbe remained standing in the sukkah for the next six and a half…
Editorial
The Year Of Shabbos
When the condominium towers in Surfside collapsed because of structural fatigue, the question was deafening: Were we thinking?
Editorial
Beginning With Shabbos
Start the children’s school day right, and the rest will follow.
Editorial
Toward A Resilient Jewry
What are those truths for which we are hated? And how do we build resilience against this onslaught?
Get Inspiration to your inbox!
Newsletter
Join our weekly newsletter for inspiration and updates
Donate
Find Your Local Chabad Center
Subscribe
|
Log In
Chabad
About Chabad-Lubavitch
About Chabad Lubavitch
The Rebbe
Headquarters
Magazine
Magazine
News
News & Updates
In The Media
Impact
Social and Humanitarian
Social and Humanitarian
Education
Education
Community
Community