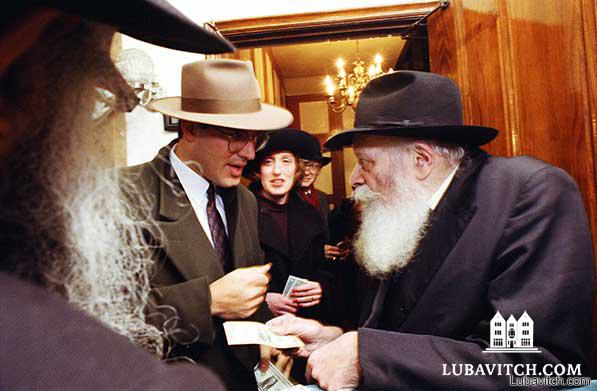 You may have seen the video clips. Maybe you were there yourself?

Every Sunday, in the early afternoon, the Rebbe would leave his office and stand in the lobby of Chabad Lubavitch Headquarters at 770 Eastern Parkway in Brooklyn. There, for hours on end, he would receive a long line of visitors — men, women, and children — which stretched outside of the building and around the block. The Rebbe would give each visitor a newly minted dollar bill together with a blessing, and ask that the dollar be given to a charity of the visitor’s choice. Some people would also seize on this brief moment, face to face with the Rebbe, to share a few words with him, to seek his counsel or encouragement, to present a recently published book, or to leave a note for him to read later on. On those Sunday evenings following what came to be called “Sunday Dollars,” the Rebbe would give me the bag containing everything people had handed to him, and I would later present the Rebbe with a catalog of its varied contents.

Sunday Dollars became an institution in itself. In order to maintain an ample supply of newly minted dollar bills, I arranged with the Federal Reserve Bank in New York for frequent deliveries to our headquarters. Quite often on Sundays I would meet people in 770 who had flown into one of the New York area airports from distances as far as Europe just to meet the Rebbe for his blessing, a dollar, and to exchange a few words. They would then promptly take the next flight back to wherever they had just come from. The Rebbe once said that he considered those encounters, each lasting just a few seconds, a form of yechidut — the Chasidic term used to describe an intimate meeting of souls.

The dollar bills the Rebbe distributed became iconic. People would keep the dollar the Rebbe gave to them and give another in its place according to the Rebbe’s instructions. Countless people treasure their dollars to this day as precious mementos of the Rebbe and a source of blessing in their lives.

This unusual practice was utterly distinctive to the Rebbe. On numerous occasions, the Rebbe quoted his father-in-law, the sixth Chabad Rebbe, explaining the rationale for his distributions: “When two people meet, it should benefit a third.”

While this regular, weekly tradition began on the Rebbe’s birthday in 1986, there were similar distributions before then, and yet others on special occasions before and after. Upon arriving at 770 before the morning prayers and before entering the synagogue, the Rebbe would often give out coins to the children for them to place in the tzedakah box. His eyes would follow them carefully as they dropped the coins into the box.

All of the countless, tireless hours the Rebbe spent personally distributing dollars to be paid forward to tzedakah, the talks he gave about the power of tzedakah, and the loving attention he paid to a small child dropping a coin in a pushka, demonstrate just how much the Rebbe cherished this mitzvah and cared to impart its value to us. Both explicitly and by example, the Rebbe charged us to become givers. Those Sunday Dollars are a reminder to us to make giving and sharing part of our lives, and part of who we are. Ultimately, tzedakah has the power to transform not only ourselves, but the world: “Great is charity,” says the Talmud (B.B.10:a), “for it brings the Redemption closer.”