Do We Need Anti-Semitism To Keep Us Jewish? 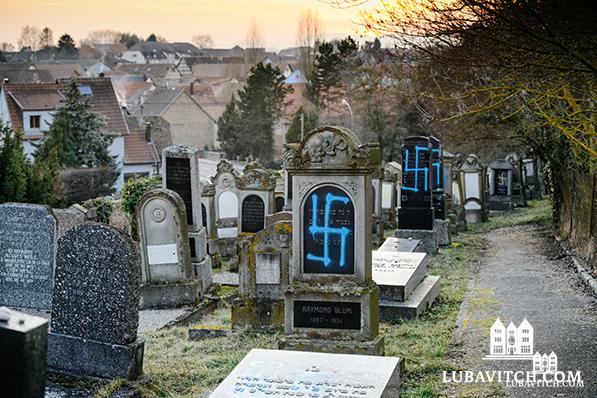 In 1962, Harvey Swados, an American novelist and social critic, visited the Lubavitcher Rebbe. He wanted the Rebbe’s opinions on issues related to the Holocaust.

Swados’s account of that discussion, which appeared in The New York Times some thirty years later, is of particular interest today, as anti-Semitism is once again normalized on the streets of major cities and campuses across the country.

He began the conversation by asking the Rebbe about the behavior of the German masses. Much to the novelist’s surprise, the Rebbe “made no reference to abstractions, whether theological or philosophical. He pointed instead to political realities.”

Swados asked the Rebbe whether it was his opinion, then, “that the tragedy was not a unique visitation upon the Jewish people, and that it could happen again?”

“Morgen in der fruh. Tomorrow morning,” he said without hesitation. A surprising statement, perhaps, coming from the Rebbe, who was renowned for his unflappable optimism.

And when Swados asked the Rebbe why he was so certain of this, the Rebbe “did not speak mystically, nor did he harp on the German national character and its supposed affinity for Jew-hatred.

“Rather, he insisted upon the Germans’ obedience to authority and their unquestioning carrying out of orders—even the most bestial—as a cultural-historical phenomenon that was the product of many generations of deliberate inculcation.”

The Rebbe then turned the questions to his visitor, and asked him how he explains “the survival of Judaism over three millenia.” In response, Swados pointed to “the negative force of persecution [that] has certainly driven people together.” He wasn’t sure, he said, if in the absence of such persecution, our Jewishness would not disintegrate.

The social critic may have been onto something.

After all, Jews do band together when they are threatened. Under attack, Jews from diverse streams will band together. Students will come to Chabad and other Jewish venues. People who’ve never sought out Jewish community spaces before look for ways to give and gain support. And that solidarity is commendable.

Now, as the negative forces loom large, it is good to remind ourselves that Jewish life grows not out of negative energy, but rather from the fertile forces of a community that shares a commitment to our historic values, that draws strength, vitality and real joy from our intellectual and spiritual heritage.

By now, the response of Chabad shluchim to every negative event is familiar, to the point, perhaps, of it sounding like a cliché. But increasing in acts of goodness really does underscore our conviction that we do not need to be persecuted to be Jewish; that we draw our strength and our vitality from light.

A negative force, the Rebbe insisted, in his conversation with Mr. Swados, could not possibly be the only answer to our continuity.

Related Articles
View All
Editorial
Not by Fear But by Faith
The Rebbe’s Vision for a Just Society
Editorial
A Time to Heal
When the doors of Chabad Houses closed, and shluchim adopted social-distancing guidelines, we wondered how this edition of the magazine would take shape. More importantly,…
Editorial
Soul Lights
Sitting with the Rebbe’s shluchim at the closing session of the Annual International Conference of Chabad Lubavitch Emissaries near the end of November, I felt…
Editorial
Taking Stock Before the New Year
We are in the final month of the Jewish calendar year—traditionally a time dedicated to taking spiritual stock of the year past. Examining our successes…
Get Inspiration to your inbox!
Newsletter
Join our weekly newsletter for inspiration and updates
Donate
Find Your Local Chabad Center
Chabad
About Chabad-Lubavitch
About Chabad Lubavitch
The Rebbe
Headquarters
Magazine
Magazine
News
News & Updates
In The Media
Impact
Social and Humanitarian
Social and Humanitarian
Education
Education
Community
Community