In Montreal, Communal Seders Not Just for Needy 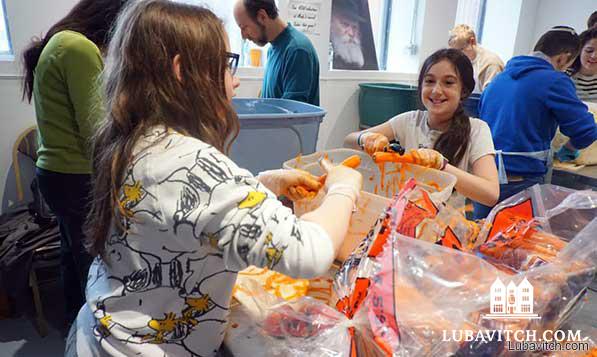 Sarah Yevzeroff, well into her 80s, would have celebrated last Passover by herself in her Montreal apartment. “My husband died and I have only one son. When you have no money, you cannot celebrate, you eat what there is and that’s it,” she says.

Thanks to Mada that was not the case.

That’s because Rabbi Chaim Shlomo Cohen, the director of Chabad’s Mada Community Center in Montreal, QC, asked himself: “How will this year’s Passover seder be different than last year’s?”

It’s a question he’s asking himself again this year, working harder to bring yet more Jews who have no one to celebrate with, to Mada’s seders. In  a community where people generally invite family and friends to celebrate the seder, the idea of a communal seder is not something locals had really considered, until Mada identified this Jewish demographic.

“We are all family” became Mada  Center’s motto, and is the inspiration for its activities, especially around holiday times when loneliness can be painfully accentuated for those with no immediate family.

According to a 2011 National Household Survey Analysis by the Montreal Jewish Federation, there are 18,130 Jews living below the poverty line in the Montreal, accounting for 20% of the total Jewish population. The needy, say Federation reports, consist mostly of the elderly, immigrants and single parent households.

With a dedicated group of 500 volunteers, Cohen and volunteers have been working to prepare 5,000 Passover meals, focusing on the seders, to be conducted in ten locations across Montreal. “We made a real effort that the meals should look and taste as they would if you are at a large seder in your own home,” he says.

At Mada’s warehouse, filled with hundreds of pounds of Matzah, 15,000 pounds of potatoes, and thousands of bottles of wine, volunteers work in shifts peeling beets, filling pans with thousands of portions of salmon and other foods for the seder.

Rabbi Pesach Sperlin, Chabad representative to West Montreal, explains that because there are so many in the city, like Sarah Yezeroff, “who do not have family, are elderly and lonely, and would not have a way to celebrate the seder were it not for Mada.” Sperlin will be hosting one of the Mada seders.

The ogranization’s coordinators serve daily hundreds of meals at their central location, and deliver weekly Shabbat provisions to the needy. Different, however, is the Passover seder, which Mada has opened to the entire community, making it an event at which people of all socioeconomic levels participate.

“This is an open seder; the tables are set in style, the food is high quality, there is a homey atmosphere and everyone’s welcome,” says Miriam Sebbag, Development Officer at Mada. In the weeks before Passover, Mada runs ads in local Jewish newspapers inviting readers to join, making the needy  more comfortable coming to these seders, where they celebrate with a mix of community members.

Like the preparations for the seder, people from the Jewish community volunteer at each location. At Mada’s largest seder at the Jewish Federation in the Côte-des-Neiges neighborhood, 75 volunteers will be on hand.

The seders are funded privately.

Related Articles
View All
Unseen, Unheard, Poor Philadelphia Demographic Becomes Community Concern
Philadelphia’s Jewish Relief Agency a meeting ground for goodness
Largest Food Bank in Israel Prepares To Feed 25,000 Families
(lubavitch.com/LNS) At a warehouse in Kiryat Malachi, volunteers are working at a feverish pace packing canned goods, fruits and vegetables, oil, matzah, and wine into hundreds…
Chabad Does Thanksgiving
(lubavitch.com) Though a popular grade-school history lesson, and a much-anticipated festival with all the trimmings, the story behind Thanksgiving remains a bit sketchy. Regardless of…
A Jewish Burial, Even for Those Who Can’t Afford
(Lubavitch.com) It’s expensive to die in the United States, and especially in California where real estate and population booms have jacked up funeral price tags…
For São Paulo’s Impoverished, A Light of Hope, Change
A new facility now offers access to the kinds of benefits that will raise the quality of life for the city’s struggling Jewish population.
About A Good Jewish Cause
Use the preview site to make sure the text you enter here fits.
Down Under, Chabad Builds A Kitchen, Everyone’s At the Table
In Sydney, a 3,200 square foot example of Chabad’s service to the community at large opened. “Our Big Kitchen” housed in a basement space excavated…
Holiday & Shabbos
Lag B’Omer Innovation Under Lockdown
On Monday evening at 18:00 sharp, 45,000 individuals tuned into the livestream at 18for18.com.au. Narrated and presented by children and individuals from Jewish communities across Australia…
Holiday & Shabbos
A Shabbat Dinner for Wine Country Survivors
With California’s wine country reeling from this week’s horrific wildfires—the most destructive of their type in California’s history—Chabad of Sonoma County is rallying the forces…
Holiday & Shabbos
Moving Out
To get her sukkah to Inwood Park in Manhattan on Sunday, artist Shaina Denburg detached its walls. But even in pieces, it didn’t fit in…
Holiday & Shabbos
A First for Sukkot in Shanghai
Rabbi Shalom Greenberg has celebrated Sukkot in Shanghai every year since 1998, but this year’s the first that he’s been able to legally import the…
Get Inspiration to your inbox!
Newsletter
Join our weekly newsletter for inspiration and updates
Donate
Find Your Local Chabad Center
Chabad
About Chabad-Lubavitch
About Chabad Lubavitch
The Rebbe
Headquarters
Magazine
Magazine
News
News & Updates
In The Media
Impact
Social and Humanitarian
Social and Humanitarian
Education
Education
Community
Community