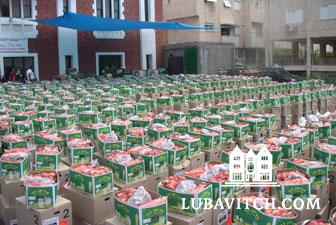 Thousands of boxes packed with foodstuffs, wait to be delivered to the needy, Israel-wide.

(lubavitch.com/LNS) At a warehouse in Kiryat Malachi, volunteers are working at a feverish pace packing canned goods, fruits and vegetables, oil, matzah, and wine into hundreds of thousands of boxes.

Within the next few weeks, the Blavatnik Colel Chabad Food Bank will deliver the cartons to 25,000 Israeli families in 70 municipalities around the country. Inside the cartons, families will also find vouchers for additional supplies, such as frozen goods, clothing, and shoes.

“It’s pulling us through,” acknowledges Hadass who would not give her last name. “It is helping a lot of people survive.”

Lubavitch.com spoke with Hadass from her home in the Har Nof section of Jerusalem. Less than an hour earlier, three boxes of groceries and produce were discreetly dropped at her door. Weighing in at 165 pounds, the food delivery will provide three meals a day for her family of 12 for an entire month.

Hadass and her husband, who is unemployed after a workplace injury, are grateful. Come April, when the supplies run out, there will be three more boxes waiting for her.

As Israel’s fortunes mount, the country’s poor are being left in the desert dust. Last year’s GDP grew seven percent, faster than that of the Unites States. Israel also boasts a steadily declining unemployment rate, currently estimated at eight percent. Analysts from Lehman Brothers claim that the shekel will continue its rise against other currencies.

On the flip side of the coin, the National Insurance Institute states that one in four Israelis are living below the poverty line. A recent government report described one million seniors and 60 percent of families with children as indigent. Despite the fact that many of today’s poor work, they don’t earn enough to rise above the national poverty line of seven dollars and 30 cents a day.
In such an economic environment, the Israeli government distinguishes Colel Chabad’s work. According to a study at Ben Gurion University, the organization is the largest charitable food supplier in the country, providing 30 percent of the 25,000 tons of food needed annually, to feed Israel’s poor.

Rabbi Shalom Duchman directs the organization from its New York headquarters. He says that Colel Chabad works in tandem with local government agencies and social workers to identify the neediest in each area.

Feeding the poor, he says, while always difficult, has become more so of late. The weakening American dollar, the currency of choice for most of Colel Chabad’s donations, does not garner as much as it used to. In addition, food prices are 20 percent higher than they were last year. And unlike other charities, Colel Chabad does not rely on manufacturers’ donations.

Rabbi Yitzchak Marton, who directs Colel Chabad’s programming for widows and orphans in Israel, says that the organization considers its commitment to the needy a sacred pledge. Colel Chabad, he explains, can’t simply tell families that “the wholesaler did not have potatoes this month, so we aren’t providing them.” Instead, the charity has to shell out more money for these basic items.

Created by Rabbi Schneur Zalman of Liadi, the founder of the Chabad-Lubavitch movement, in 1788, Colel Chabad is Israel’s largest and oldest extant organization providing the country’s poorest with their basic needs. Widows, orphans, and single-parent homes have long since survived on the generosity of the organization. Always, there are new exigencies prompting Colel Chabad to extend its reach. There are currently 200 families in devastated Sderot receiving monthly deliveries.

Some 2,500 individuals who cannot prepare their own food, either because of disability, age, or homelessness, eat their meals at one of Colel Chabad’s 16 soup kitchens around the country. The Meals on Wheels division feeds an additional 3,000 homebound beneficiaries. All these services run daily, except for Yom Kippur.

The pace and volume step up around the holidays, and Passover is an especially costly period.  Additional products required for holiday observance and the beginning of a new season when families purchase new clothing and shoes make for an expense even the middle-class struggle with.

But "as long as there are hungry people in Israel," says Marton, "we will feed them."