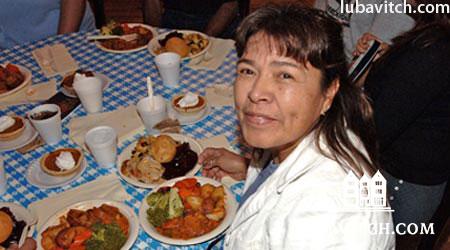 (lubavitch.com) Though a popular grade-school history lesson, and a much-anticipated festival with all the trimmings, the story behind Thanksgiving remains a bit sketchy. Regardless of its provenance, Americans appreciate a good celebration, and Thanksgiving has been a national holiday for almost 400 years.

This year, despite economic worries and a collectively uncertain future, Chabad centers across the country are ensuring that people still have something to be thankful for.
Rabbi Zalman Carlebach and members of his downtown San Diego community are running to help. Literally. Michael London, a regular at Chabad of Downtown, organized the PureFitness Thanksgiving Run for the Hungry 10K/5K. Close to 4,000 people will race through the closed streets of San Diego to benefit the San Diego Food Bank and Foodmobile, a program of Jewish Family Service.
Carlebach’s “Team Chabad” includes 100 eager participants who hope to raise several thousand dollars in order to feed the city’s hungry. “People are more concerned these days with the economic crisis,” he explains, “and they want to do more to help others.” Chabad is a recognized distributor to the city’s poor. Canned goods, pasta, beans, and gefilte fish are all staples to be found in the packages Carlebach prepares and delivers each week.
The morning will be one of true thanksgiving, says the running rabbi. “First we are giving tzedaka, by running for the hungry. Then we will join together in thanksgiving to G-d,” with a finish-line minyan. Members of the broader Jewish community are set to join Chabad for prayers and a typical Jewish thanksgiving repast: bagels and lox.
For those looking for something more traditional by way of Thanksgiving food, Sharing the Warmth, a division of Chabad of California is feeding 700 indigent Angelenos. The Los Angeles Hard Rock Café is to be koshered for the Thursday dinner of turkey, mashed potatoes, and cranberry sauce.
Rabbi Mendel Cohen directs Sharing the Warmth.
“We are focusing on families and kids,” he says. “We want to provide otherwise neglected families with a chance to participate in the holiday.” Busses will bring the diners to the popular Universal Studios restaurant from underprivileged neighborhoods and shelters from across the city. “Many of our guests have never been to Universal,” says Cohen, “and the excitement and joy they feel is immense.”
Not everyone can make it out of the house, though.
Rabbi Shalom Lubin recognized that need five years ago, when he first delivered Thanksgiving dinners to residents of a low-income housing complex in Morris County, New Jersey. Since then, the Chabad representative has steadily increased the number of packages he prepares. Come Thanksgiving, he intends to deliver to some 200 homebound people.
“We want to give people who are lonely or alone, who have memories of celebrating Thanksgiving when they were growing up, a chance to feel at home again,” explains Lubin. The packages are delivered to Jew and non-Jew alike, with the bulk of deliveries being made to Holocaust survivors and war veterans.

“My favorite part of the dinner is the turkey,” says Shirley Slavin, a resident at Chesire Home III. “You can eat a bit Thanksgiving night and there’s still some left the next day for a sandwich.”

Slavin, 54, is anticipating her fourth holiday with the Rabbi. “It is nice to know people care, and take time out of their day to bring you a dinner,” she says. “I could be sitting home alone. When you don’t have a place to go it makes all the difference to have people like that around.”

“Human contact is a simple thing to do,” says James Rubenstein, a 55-year old volunteer. “But you see the change in people.” Rubenstein used to give his charity in the form of a check, where “you don’t really know where your money is going.” But delivering dinners with a smile, made the experience “personal,” he says. “We actually witness how we touch these people.”

Thanksgiving, believes Cohen in Los Angeles, “is a time to realize what is important in our lives.” It is also a time, he says, “for thanks and for giving to others.”

Ultimately, he says, “what you give to others is all that remains for you.”

Chanee Grossbaum contributed to this story.