For São Paulo’s Impoverished, A Light of Hope, Change 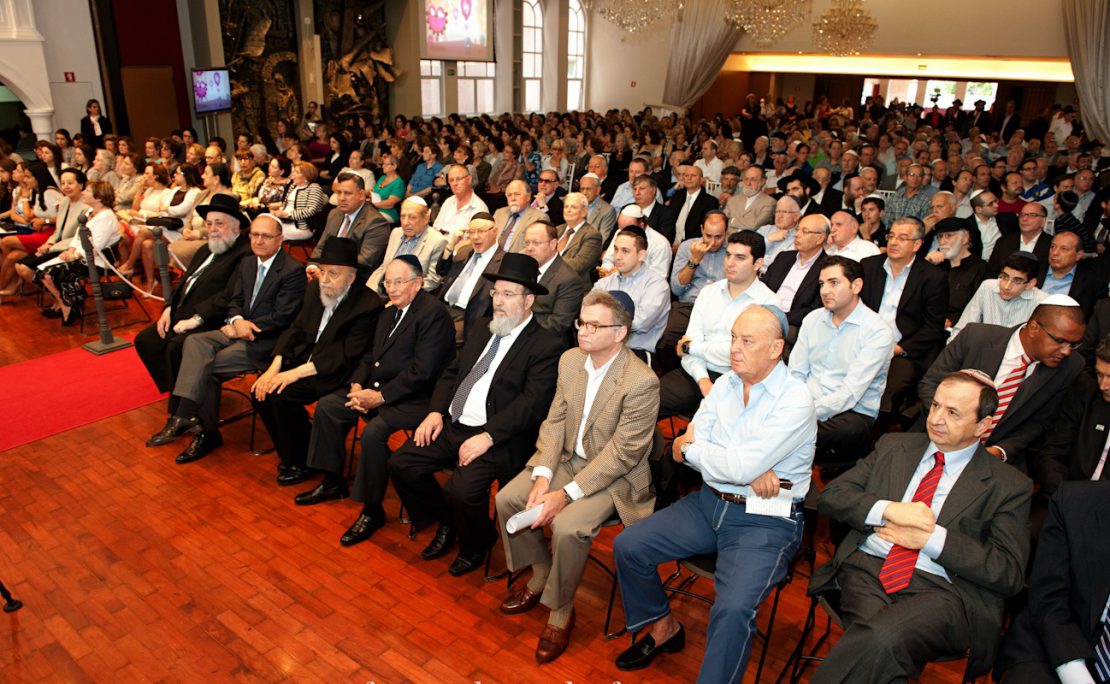 Government officials, leading rabbis and guests at the inauguration of the new Ten Yad soup kitchen center in São Paulo.

With the opening Sunday of the new Ten Yad Jewish Center in São Paulo, Brazil, the much adored tradition of Chanukah Gelt has taken an enormous leap. Until recently, Ten Yad’s acclaimed soup kitchen fed the hungry; now the social services arm of Chabad of São Paulo is providing access to the kinds of benefits that will raise the quality of life for the city’s struggling Jewish population.

According to a recent report by The World Bank, Brazil’s Bolsa Familia social welfare program has cut extreme poverty by more than half over the last decade. But some 30 million Brazilians continue to live in poverty. Of São Paulo’s 80,000 Jews, about 10 percent live below the poverty level.

Established in 1992, Ten Yad began with a soup kitchen and a vital food distribution program. Its “Meals on Wheels” service delivers some 102,000 warm, nutritious meals a year city-wide to those who cannot make it to the soup kitchen, where another 750,000 meals a year are served up. In addition, Ten Yad counts 116 tons of basic food staples, including dairy and meat perishables, distributed to the city’s needy.

Acclaimed as a model humanitarian program in Brazil, and noted as such on several occasions by  former President of Brazil, Luiz Inácio Lula da Silva, Ten Yad has expanded as a provider of more than nutritional provisions; committed to executing its mission with compassion and efficiency, its comprehensive program also includes assistance for the homeless, an orphan fund, programs for prisoners, and scholarships to children’s summer camp programs.

Rabbi Dovid Weitman, Chabad representative of São Paulo and chief rabbi of the Sephardic community center Beit Jacob said the new center was prompted by the desire to ensure that those suffering poverty “should not live on the margins of society, but should be empowered to participate socially, and to celebrate their own family life-cycle events in dignity, with pride.”

The six-story center, which has been in use for about a year, is abuzz with activity at all hours. In addition to serving 2300 hot meals daily, the 35,000 square foot facility features an elegant party hall and catering services that now enables indigent Jewish families to make respectable bar/bat mitzvahs and weddings—otherwise unaffordable—for their children. An ophthalmic clinic, a reading library, and an auditorium are among some state-of-the-art features now at the disposal of thousands of the city’s destitute Jews

With a team of social workers and 300 volunteers, recreational activities for children and adult-educational programs, “This is a truly happening place, where adults and children can hang out in a constructive environment, make use of the well-equipped game rooms, watch films, enjoy the library, all in a lively, inviting setting,” said Mrs. Fany Waiswohl, coordinator of the volunteer services.

Situated in the poor Bom Retiro area north of Sao Paulo, the new facility, observed Ten Yad Executive President Moises Nigri, offers the kind of assistance that should translate into “meaningful change for local families and individuals,” caught in the vicious cycle of poverty.  Its annual budget of $4.5 million is raised entirely by local philanthropists, Rabbi Weitman told lubavitch.com.

In his remarks at the elaborate Chanukah celebration/dedication, Mr. Safra paid tribute to his mother and her legacy of caring for the needy in Lebanon. “I have seen how Ten Yad started, and how it has developed and grown inspired by the values of Judaism, and I am proud to be part of its expansion.”

Following his tour of the new Ten Yad center, Governor Alckmin referred  to a Chabad motto he noticed on one of the walls inside the building to describe Ten Yad’s achievement: “Better one useful act than a thousand sighs.”

The Governor noted that the city partners with Ten Yad in another humanitarian project: a non-kosher soup kitchen that feeds 1800 homeless a day in the neighborhood of 25 de Marco.

“Since Ten Yad has opened that second soup kitchen a few years ago, it has served some 5 million meals,” said the Governor. He observed that the area’s population consists largely of second-generation Arab immigrants. “And look who came to feed them,” said the Governor . . . “the Jewish people of Ten Yad.”