Down Under, Chabad Builds A Kitchen, Everyone’s At the Table 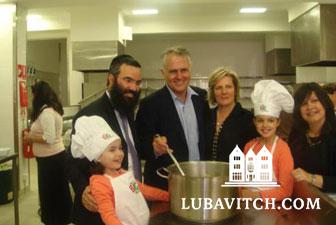 Macolm Turnbull MP with his wife, and Rabbi Dovid and Mrs. Slavin with their children in Our Big Kitchen.

In Sydney, a 3,200 square foot example of Chabad’s service to the community at large opened.

“Our Big Kitchen” housed in a basement space excavated from under the Yeshiva Center building demonstrates how Chabad’s outreach to all neighbors continues even when disasters and their headlines are nowhere in sight.

Chabad of New South Wales, under the leadership of Rabbi Pinchus and Pnina Feldman since 1968, built the kitchen to give community groups a place to prepare meals for the hungry, give cooking lessons to the poor, and cater their own events. As a kosher kitchen, rabbinical supervisors remain on site no matter who uses the kitchen, which multiplies opportunities for cultural exchange.

“Whatever it is, we believe it can be done better with food,” said Rabbi Dovid Slavin, director of Our Big Kitchen (OBK).

In an interview with Lubavitch.com, Rabbi Slavin’s served up a melting pot of ideas for the kitchen’s use. It will be a living laboratory for those experimenting with the idea of keeping a kosher home. Fire and ambulance companies can rustle up food in OBK when they’re on call during emergencies.

Underprivileged aspiring chefs can learn the knife and stove skills they need to get a decent job, a variation on Californian-gourmand Alice Water’s Edible Schoolyard program.

“The new kitchen will provide food to those in need in our community in need of nourishment and will be utilized to support the work of other community service organizations, regardless of religious affiliation,” Prime Minister of Australia John Howard wrote in a letter to Chabad.

Contributors from the Greek community, a culture well aware of the power of a good meal, joined Sydney’s Jewish community to get the kitchen open.

At the community banquet where Our Big Kitchen was feted before a crowd of 1,400, the project’s broad base of support appeared right on the dais. Political rivals Malcolm Turnbull MP and Kevin Rudd, the Guiliani and Clinton of Australia, showed up to salute the effort. Turnbull was the night’s guest of honor. Keeping the evening’s program moving along was talk radio host Alan Jones.

Jones, Down Under’s answer to Rush Limbaugh, emceed the event and lent his voice to OBK’s fundraising video.

“The vision of the kitchen,” Jones said, “is to ‘teach people to fish’ rather then giving them a fish.”