A Jewish Burial, Even for Those Who Can’t Afford 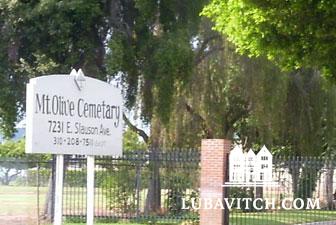 (Lubavitch.com) It’s expensive to die in the United States, and especially in California where real estate and population booms have jacked up funeral price tags to the $10,000 mark.

To follow Jewish law that insists on consecrated land as a final resting place for all–and prohibits the cheaper cremation option-is prohibitively expensive for those who die poor or without a family to fend for them. But the same sources also make it a mitzvah, the ultimate good deed, and a communal responsibility to bury the indigent with dignity.

Chabad of California provides traditional burials without charging a fee to the impoverished and forgotten in a kempt but plain cemetery tucked between a warehouse and an industrial park, east of LA.

“Chabad has evolved into the address for those who cannot afford a Jewish burial,” Rabbi Chaim N. Cunin told Lubavitch.com from Chabad of West Coast headquarters in LA.

Mt. Olive Memorial Park, a Jewish cemetery in use since 1948, was donated by the Groman family to Chabad in the early 1980s. When a need arises, Chabad partners with local Jewish mortuaries, who offer pro bono service to the destitute as part of their charter, and other organizations to prepare and transport the deceased. Chabad provides the funeral and burial services and the plot.

On an average year, 100 burials take place at Chabad’s cemetery, according to Rabbi Yossi Greisman who directs the program. “First and foremost, we give priority to giving the deceased a proper Jewish burial. We don’t let financial issues get in the way.”

Hospice nurses and nursing home caregivers turn to Chabad for help when the person in their care has no one. They’ve had services for Holocaust survivors, homeless people, for young people who die suddenly, and for people “who lived day to day depending on Chabad’s help,” said Rabbi Jonathan Tuller, director of Chabad’s Crisis Intervention Center.

Rabbi Tuller was put in touch with a woman who had no family or money to make any arrangements for herself. “She was only in her sixties and had no terminal illness, but when a person has no relatives or income, these thoughts are on their mind.”

Three weeks ago this little publicized program made a difference to Ronnie Kehr. Kerr, 62, was found dead by the police in Tacoma, WA. On his nightstand, they found the number of Rabbi Zalman Heber, the Chabad representative to Tacoma. Kehr had been a regular at the Hebers' for the past three years. Childless and divorced, there was no one to advocate for him, and without swift intervention, Kehr was to be cremated.

Rabbi Heber set to work immediately, reaching Kehr's lawyer at his home, on a Saturday night, and locating next of kin, and friends from Kerr's past.

"It occurred to me that Kehr had frequented the home of the late Rabbi Shmuel Dovid and Leah Raichik, emissaries sent to California by the sixth Lubavitcher Rebbe in 1948," said Rabbi Heber, who then contacted Rabbi Levi Raichik, of Chabad of Hancock Park.

Levi Raichik remembered Kehr’s many visits to his parents’ home. “We both went into a mode that this man needed a Jewish burial, and nothing would stop us until it was accomplished,”he said.  An all out manhunt for Kehr’s relatives ensued. After much convincing, Kehr’s elderly aunt released the body to Chabad.

“When you bury someone who is all alone, there is no one to thank you, nobody to say, ‘hey we appreciate what you did, you guys are great,’” said Raichik. “We wanted to make sure Ronnie got a proper burial because it was the right thing to do.”

Related Articles
View All
Features
Batter’s Up . . . But Never on Shabbat
Infielder and pitcher Elie Kligman has been running the bases as long as he can remember. One of the top-ranked youth players in Nevada, the…
Features
Statistical Outlier: From Catholic Woman To Chasidic Scholar
Born to an Italian Catholic family in Binghamton, NY, Ani briefly attended Sunday school and took her first Communion, until dropping out of church, with…
Features
Above The Fray
Judaism is neither liberal, nor progressive, nor conservative. It is Judaism. It precedes all of these categories, cuts through them, and floats above them. The…
Features
A Judge and a Jew
Ginsburg, who passed away on September 18 at the age of 87, was memorialized as a brilliant jurist, a tireless advocate for women’s rights, and…
Get Inspiration to your inbox!
Newsletter
Join our weekly newsletter for inspiration and updates
Donate
Find Your Local Chabad Center
Subscribe
|
Log In
Chabad
About Chabad-Lubavitch
About Chabad Lubavitch
The Rebbe
Headquarters
Magazine
Magazine
News
News & Updates
In The Media
Impact
Social and Humanitarian
Social and Humanitarian
Education
Education
Community
Community