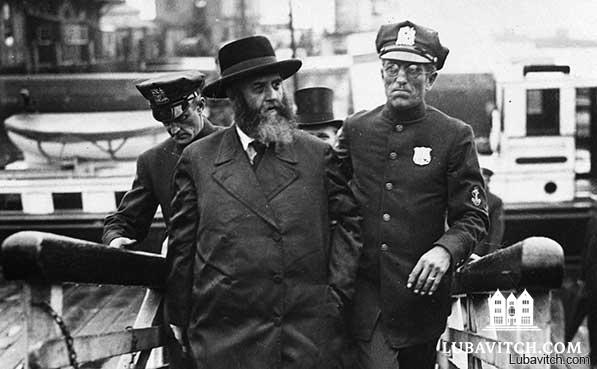 The sixth Chabad Rebbe, Rabbi Joseph Isaac Schneersohn, escorted by the New York Police Department, upon his arrival in the United States, 1929.

Today, on the Jewish calendar, marks the 95th anniversary of the miraculous liberation of the sixth Chabad Rebbe, Rabbi Joseph Isaac Schneersohn, from Soviet prison.

The day has become a memorable date on the calendar for tens of thousands of Jews the world over, not only to the followers of the Chabad movement which Rabbi Schneersohn headed for thirty years.

While vicious attempts by the Yevsektzia (the Jewish section of the communist party) were being made to eradicate Judaism in Russia, Rabbi Schneersohn defied the stern warnings of the authorities and led the Jews there in raising a loyal Torah-true generation. For these ‘subversive’ activities he was imprisoned and sentenced to death.

Due to the timely intervention of many leading foreign statesman and nothing short of a miracle his life was spared.

On the third day of Tammuz, 5687 (1927), Rabbi Schneersohn was released from the notorious Spalerno prison in Leningrad, after 18 days of excrutiating torturous confinement, and was exiled to Kostrama, a small town-in the Urals. But here again, under high level diplomatic pressure, the late Rebbe was released, on his 47tb birthday, on the twelfth day of Tammuz. Less than a half year later he was able to leave Russia with his family, and the bulk of his famous library intact. Wherever Yiddishkeit is to be found in Russia today, from the Baltic to Turkestan, it is without doubt due to the singular and legendary efforts of the Rebbe there.

What the late Rebbe did for the East he repeated for the West. In 1940, barely escaping the burning streets of the Warsaw ghetto, he arrived in New York. Though no longer subjected in the New World to religious persecution, he was confronted with other handicaps, his own broken body resulting from tortures undergone, and the complacency and indifference to religion on the part of certain segments of the affluent American Jewish community. His restless mind, however, was unaffected by these.

In the short span of one decade, until his passing in 1950, Rabbi Joseph Isaac succeeded, almost singlehandedly at first, to turn the tide and imbue America with the spirit of Torah that previously prevailed in Eastern Europe. Yeshivahs and Day Schools, youth clubs, multilingual Jewish publications, appeared in communities; formerly believed hopelessly lost. These and other related projects helped to reacquaint multitudes with a tradition forgotten and raise a Torah minded generation, while he restored faith, courage and dignity to countless refugees and D.P.’s whom he helped to resettle.

His contagious zeal and immediate apparent success inspired many to follow suit. He thawed the ice of complacency and his disciples, many of whom were American born, were soon joined by others in the endeavor of spreading the light of Torah.

His ten revolutionizing years in the United States also saw the publications of scores of his works, including original treatises of great profundity, commentaries and essays, some of which have been translated into English. The published parts of his voluminous diary reveal a treasure of hitherto unknown details of the history and development of Chassidism in general, and of the Chabad-Lubavitch movement in particular.

There is no greater testimony to the efficacy of his efforts then seeing their actualization in ever growing measure, quantitavely and qualitatively.

Rabbi Joseph Isaac Schneersohn added fuel to the flame kindled by Rabbi Schneur Zalman of Liadi, the founder of the Chabad-Lubavitch movement.

For the complete story of the Rebbe’s arrest and liberation read Heroic Struggle.

Related Articles
View All
Rabbi Joseph I. Schneersohn: America Is No Different
The 12th day of the Hebrew month of Tammuz, this year corresponding to June 4th, marks the date 82 years ago, that Rabbi Yosef Yitzchak…
The “Release Time Program” Historical Album
In the 1940s and 50s, before the proliferation of Jewish day schools, most Jewish children went to public schools. Many of them in the New…
NCFJE Celebrates 70 Years
Last Sunday, November 21, 700 guests joined the National Committee For Furtherance of Jewish Education at a 70 year anniversary celebration Chelsea Piers Pier 60.
After 80 Years, Key to Baltimore Presented to Chabad
Initially intended to be presented by Mayor William Frederick Broening to the sixth Lubavitcher Rebbe, Rabbi Yosef Yitzchak Schneersohn
Senior Chabad Representative, Mrs. Rivkah Hecht, 91
Rebbetzin Rivkah (Ruthie) Hecht, a pioneer of the Jewish day school movement and one of the original Chabad emissaries to New Haven, Connecticut, passed away…
Eldest of Chabad Representatives, Rabbi Dovid Edelman, 90
Rabbi Dovid Edelman, dean of the Lubavitch Yeshivah Academy (LYA), in Longmeadow, Massachusetts, passed away this past Friday, at the age of 90.
History
Birthday of the fifth Chabad Rebbe, Rabbi Sholom DovBer Schneerson in 1860 (5621)
20 Cheshvan: Birthday of the fifth Chabad Rebbe, Rabbi Sholom DovBer Schneerson in 1860 (5621).
History
Chabad Marks Birthday of Movement’s Founder
On 18 Elul, we celebrate the birthday of Rabbi Schneur Zalman of Liadi, founder of the Chabad-Lubavitch movement.
History
Remembering the Rebbe’s Father
Today in Jewish History, the passing of Rabbi Levi Yitzchak Levi Yitzchak Schneerson (1878-1944), father of the Lubavitcher Rebbe.
History
Tisha B’Av: Remembering for a Better Future
This evening, Jews around the world will remove their shoes, begin a 25-hour fast, and sit low on the floor in the manner of mourners.
Get Inspiration to your inbox!
Newsletter
Join our weekly newsletter for inspiration and updates
Donate
Find Your Local Chabad Center
Subscribe
|
Log In
Chabad
About Chabad-Lubavitch
About Chabad Lubavitch
The Rebbe
Headquarters
Magazine
Magazine
News
News & Updates
In The Media
Impact
Social and Humanitarian
Social and Humanitarian
Education
Education
Community
Community