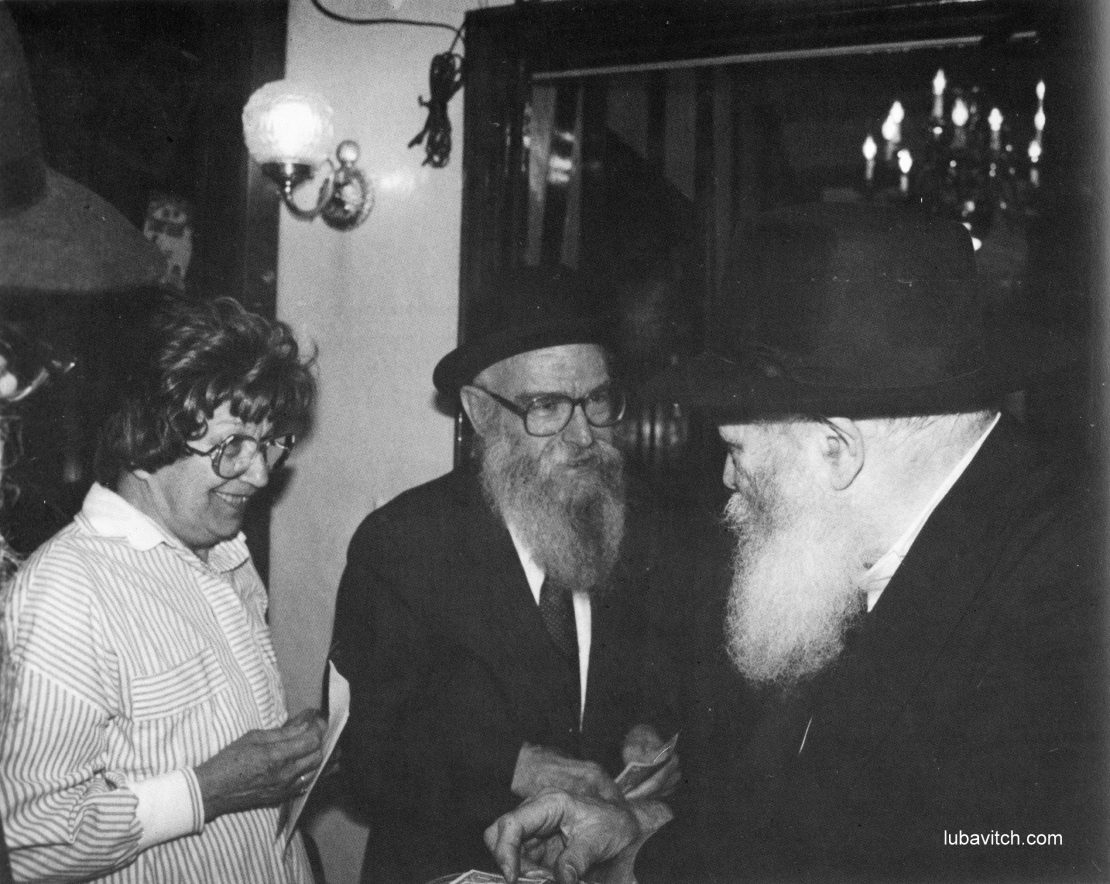 All News
By Mordechai Lightstone

(lubavitch.com) Rebbetzin Rivkah (Ruthie) Hecht, a pioneer of the Jewish day school movement and one of the original Chabad emissaries to New Haven, Connecticut, passed away Thursday, July 8 after a lengthy illness. She was 91.

Born Feburary 3, 1919, in Malden, Massachusetts to Rabbi Shmaya Krinsky, a schochet for the kosher wings of the Armour and Swift meat processing companies, and his wife Etta, Rivkah grew up as part of a warm and tight-knit Chasidic family. At the time, Orthodox Jews in the Boston area were few in number, and the community lacked the infrastructure to support Orthodox day schools. Instead Rivkah attended the Boston Latin School for girls and studied in the evenings at a local Talmud Torah.

Despite the absence of formal Jewish schooling, the Krinsky children learned by example set in their home where they were raised by their parents with the love and commitment to a Jewish life. In particular, the Shabbat meals, with traditional melodies and Torah discussions, served as the highlight of the spiritual week for Rivkah and her siblings. As her younger sister, Chava Devorah Shusterman would later recall, the Shabbat meals in their home were an island of “utter spirituality.”

Emissaries sent to America by the sixth Lubavitcher Rebbe, Rabbi Yosef Yitzchak Schneersohn, to help raise funds for the various Chabad institutions in Europe, were frequent guests in the open Krinsky home. Personalities like, Rabbi Shvmuel Levitin, Rabbi Yitzchok Horowitz, popularly known as “Itche der Masmid,” and Rabbi Mordechai Cheifitz brought with them stories of Chasidic life in the Old Country. These guests, evidence of  the vibrant Chasidic community in Europe, left a powerful impression on Rivkah, further deepening her commitment to Jewish life and tradition.

After graduating from the Hebrew Teachers College, Rivkah was introduced to her future husband and partner in Jewish outreach, Rabbi Moshe Yitzchok Hecht. The two were married September 20, 1941 in what would later be remembered as Boston’s first Chasidic wedding. The sight of the yeshivah students, friends of the groom, dancing to traditional Chasidic melodies – transcribed by Rivkah’s younger sister Yocheved from the tunes sung at the family’s Shabbat table – favorably impressed the community. Rabbi Mordechai Savitsky, a prominent figure on the Orthodox scene in Boston and the honorary president of the Union of Orthodox Rabbis of the United States, later wrote a letter to the Rebbe extolling the American-born yeshivah students who seemed as if transplanted from across the Atlantic.

Settling in Brooklyn, where Rabbi Hecht had been appointed the spiritual leader of a local synagogue, the young couple dedicated themselves to the the initiatives of the Rebbe to help strengthen Sabbath observance among local shop-owners and community members. Soon after, however, the Hechts moved to Worcester, Massachusetts at the behest of the Rebbe, to establish a local branch of the Lubavitch run Achei Tmimim yeshivah network.

The young couple were inspired by the Rebbe to dedicate themselves to strengthening Jewish identity and helping their fellow – even if at the price of personal sacrifice. “Until today you have earned your living by that which comes from the earth,” the Rebbe wrote to them. “In the future, you will earn your bread from Heaven.” Leaving the comforts of Brooklyn and its large and well establish Jewish community, the Hechts and their young daughters moved to Worcester.

After their success in Worcester, the Rebbe instructed them via telegram to relocate to New Haven, Connecticut in 1946. Previous attempts had been made to open a Jewish day-school in there, but none had been able to succeed. It was the Rebbe’s hope then, that the dynamic couple would be able to finally open a Jewish day school. Entrusting the leadership of the Worcester school to Rabbi Herschel Fogelman, a friend of Rabbi Hecht’s who helped establish it, the Hechts and their growing family left the community they had labored to build once more for the unknown.

Within days of arriving in New Haven, they opened a Jewish day school in a dining room rented from a member of the community. The first class was attended by four local children. At the time even within many Orthodox communities, the concept of attending a full-day Jewish parochial school was viewed as anachronistic and resistance to the Hechts was high. During their early days in New Haven, Rabbi Hecht would literally knock on doors – visiting families in the community in an attempt to encourage them to enroll their children. The work was daunting, yet by 1948 the school had expanded to 120 students and was forced to relocate to better accommodate the growing student body.

In addition to the school, the Hechts took on various other communal roles for both the local community and the Jewish world at large. In 1948, Rabbi Hecht was appointed as the leader of the Beth Israel synagogue, one of the largest Orthodox congregations in Connecticut, and in 1949, the Hechts were sent on a fact finding mission to Bogota, Columbia to report on the welfare of the Jewish communities in South America, where the Jewish population swelled following the influx of wartime refugees from Europe.

Such missions abroad, first on the initiative of the previous Rebbe and, after his passing, of his succesor, Rabbi Menachem Mendel Schneerson, the seventh Lubavitcher Rebbe, would continue over the next few decades – with additional trips made in to Brazil in 1950 and again in 1963 to Israel, Greece, Turkey, Yugoslavia, Vienna and Amsterdam.

In 1967, the Hechts began the plans for construction on what was to be their magnum opus – a state of the art building to house the Yeshivah Day School and Girls High School. When shown the plans, the Rebbe expressed pleasure that the Hechts had such “grand ideas.”  When the building was dedicated in 1970, Rebbetzin Chaya Mushka Schneerson, the Rebbe’s wife, came to see the new building for herself, later expressing a great appreciation for the building’s function and modern design.

Serving as a foil to her husband’s dynamism, Rebbetzin Hecht dedicated herself entirely as a partner in her husband’s work. In addition to her work as a skilled teacher in the school and her dedication to her family life, Rebbetzin Hecht found time to arrange even the most minute details of the synagogue’s needs – with little kosher food available in New Haven, she prepared the entire Shabbat kiddush from scratch.  “My mother was totally devoted to her life’s work,” her daughter Mrs. Malka Katz recalls. “No matter what the task was, she went about it with the same selfless dedication.”

Others in the community recall the intensity of mission and quiet dedication as well. Rabbi Mordy Einbinder, associate director of Chabad of the Valley and emissary to Tarzana, California, was a student in the Hecht’s school. As a childhood friend of the family, Einbinder was privileged to a see a more intimate side of the Hechts than other students in the school.

“She was an incredibly powerful person.” He recalls. “She took a full part in building the vision she shared with her husband in spreading Judaism in Connecticut.”  In her job as a teacher and a matriarch to the growing Jewish community, Rebbetzin Hecht possessed “a sense of poise and presence that were to be reckoned with.” She was able to clearly articulate her opinions – but knew when to use a smile to calm a nervous parent.

Even after the sudden passing of her husband of 50 years in 1992, Rebbetzin Hecht remained active in the institutions they had established together.  “The school and community here in New Haven played a central role in my mother’s life,” says her son, Rabbi Sheya Hecht, director of Chabad of Orange – Woodridge, Connecticut. “She helped pioneer the Jewish day school movement, and she remained committed to her vision with an intensity of purpose throughout her life.”