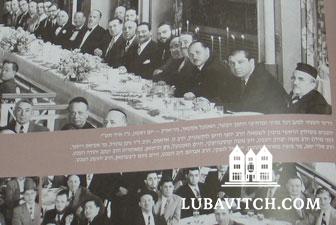 From the album: At a Release Time Program dinner in the 1940s

In the 1940s and 50s, before the proliferation of Jewish day schools, most Jewish children went to public schools. Many of them in the New York area will recall those Wednesday afternoons when they along with their Jewish classmates, were excused from class for an hour of Jewish education and recreational activity.

Now, newly released by the Lubavitch publishing house is a beautiful, historic album entitled "Shiurei Limud Hadat: A Historical Review of the Relased Time Program" containing a wealth of information and rare images of the the Release Time Program of Greater New York, also known as the "Wednesday Hour."

The program was developed after a New York State law enacted in 1940 allowed public school children to be excused from class for an hour a week for the purpose of religious education. Rabbi Yosef Yitzchak Schneersohn, Lubavitcher Rebbe at the time,  saw this as an opportunity to reach Jewish children and founded an organization under the auspices of his Merkos L'Inyonei Chinuch called  Shaloh, an acronym for the Hebrew Shiurei Limud Hadat [lessons in the study of religion].

The Release Time Program would give thousands of children the kind of exposure to Judaism and Jewish life that became the impetus for many to go on and study at yeshivas, and eventually, to become religiously active and observant in their own lives.

At that time, Rabbi Menachem M. Schneerson, son-in-law to Rabbi Yosef Yitzchak, was appointed chairman of the Lubavitch educational division, and took a personal interest in the development of this program.

Along the way, many objected to the Release Time program. Voices of opposition came from within Orthodox circles, arguing that it would be an excuse for parents not to send their children to proper Talmud Torahs, as well as from anti-religious groups. Some claimed this violated the separation of church and state, and filed appeals to the Supreme Court.

The album, with Hebrew text, documents steadfast commitment of the Chabad Rebbes to the Jewish education of Jewish children, notwithstanding the opposition. Under supervision of the late Rabbi Jacob J. Hecht, of blessed memory, at The National Committee for the Furtherance of Jewish Education—a division of Merkos, the program continued to provide what was for thousands of Jewish children, their only exposure to yiddishkeit. Ultimately, other religious groups began implementing similar programs too.

The program continues today, as scores of rabbinical students set out every Wednesday from the NCFJE offices at 824 Eastern Parkway—study sheets, prayer booklets, kosher snacks and prizes in hand—to many locations citywide where the classes are held.

The album contains images of many documents, photographs, letters and newspaper clippings, appearing in their original languages of English, alongside a running text—all which tell the story of this remarkable organization, its founding, development, challenges, and triumphs.

Of the ten chapters in this book, one documents the opposition to the Program and how it was handled, while another chapter details a unique 1976 Sukkot gathering held by the Lubavitcher Rebbe exclusively for the children of the Release Time program.

A special chapter records the activities by the program for Israeli children in the New York public school system, and another chapter gives us an overview of the colorful Lag B’omer Parades held in Brooklyn, New York, at 770 Eastern Parkway.

The album, with an index and supplements, was compiled by Rabbi Yitzchok Naparstek, currently serving as a Shaliach in Fort Lauderdale, Florida.

The album is available at kehotonline.com