Rabbi Joseph I. Schneersohn: America Is No Different 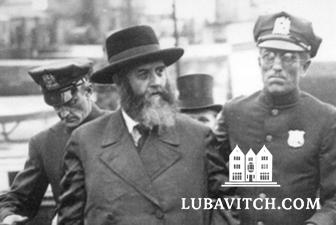 The 12th day of the Hebrew month of Tammuz, this year corresponding to June 4th, marks the date 82 years ago, that Rabbi Yosef Yitzchak Schneersohn, of blessed memory (1880-1950), sixth Lubavitcher Rebbe, was liberated from Soviet prison. The 12th of Tammuz is thus a celebrated date on the calendar of Chabad-Lubavitch, and Jewish communities around the world. Rabbi Yosef Yitzchak led the movement for thirty years, and relocated its headquarters to New York, following WWII. From the lubavitch.com archives:

In the face of vicious attempts by the dreaded Yevsektzia to eradicate Judaism in Russia, Rabbi Schneersohn defied the authorities and persisted in all ways possible, to perpetuate Judaism. For these "subversive" activities he was imprisoned and sentenced to death.

The intervention of many leading foreign and American statesmen were significant in securing Rabbi Schneersohn’s miraculous release and arranging for his escape to the U.S. On the third day of Tammuz, 5687 (1927), Rabbi Schneersohn was released from the notorious Spalerno prison in Leningrad, after 18 days of excruciating confinement. He was then exiled to Kostrama, a small town in the Urals. But here again under high-level diplomatic pressure including that of the United States President Hoover, the Rebbe was released, on his 47th birthday, on the twelfth (though official notice came on the thirteenth) day of Tammuz. Less than a half year later he was able to leave Russia with most of his family, and the bulk of his famous library intact.

Throughout his ordeal of imprisonment and interrogation, Rabbi Schneersohn’s spirit remained unbreakable, confident and determined that his purpose would ultimately triumph. In 1940, barely escaping the burning streets of the Warsaw ghetto, he arrived in New York. Though no longer subjected in the New World to religious persecution, he was confronted with other handicaps, mainly the complacency and indifference to religion by certain segments of the estranged American Jewish community.

In the short span of one decade, until his passing in 1950, Rabbi Yosef Yitzchak succeeded, almost single-handedly at first, to turn the tide, and introduce to the American Jewish landscape a spirit of Torah like that formerly known in Eastern Europe.  Yeshivot and Day Schools, youth clubs, multilingual Jewish publications, appeared in communities that had seemed hopelessly lost to Judaism.

These and other related projects helped reacquaint multitudes with the Tradition and raise a Torah minded generation, while he restored faith, courage and dignity to countless refugees and D.P.'s whom he helped to resettle. His zeal and apparent success inspired many. Said to have "melted the ice of religious indifference," he and his disciples, many of whom were American born, were soon joined by others in their work to revive Judaism. Rabbi Yosef Yitzchak also published scores of Chasidic works, among them Chasidic discourses, commentaries and essays, some of which have been translated into English. The published parts of his voluminous diary reveal a treasure of hitherto unknown details of the history and development of Chasidism in general, and of the Chabad-Lubavitch movement in particular.

Following his passing in 1949, Rabbi Schneersohn’s son-in-law, Rabbi Menachem Mendel Schneerson, of righteous memory, succeeded him, becoming the seventh Rebbe in the dynasty of Chabad-Lubavitch leaders.

A special web presentation on the arrest and liberation of the Rebbe is available at:

The book, The Heroic Struggle, is available at:
http://store.kehotonline.com/index.php?stocknumber=EFR-HERO&deptid=&parentid=&page=1&itemsperpage=10