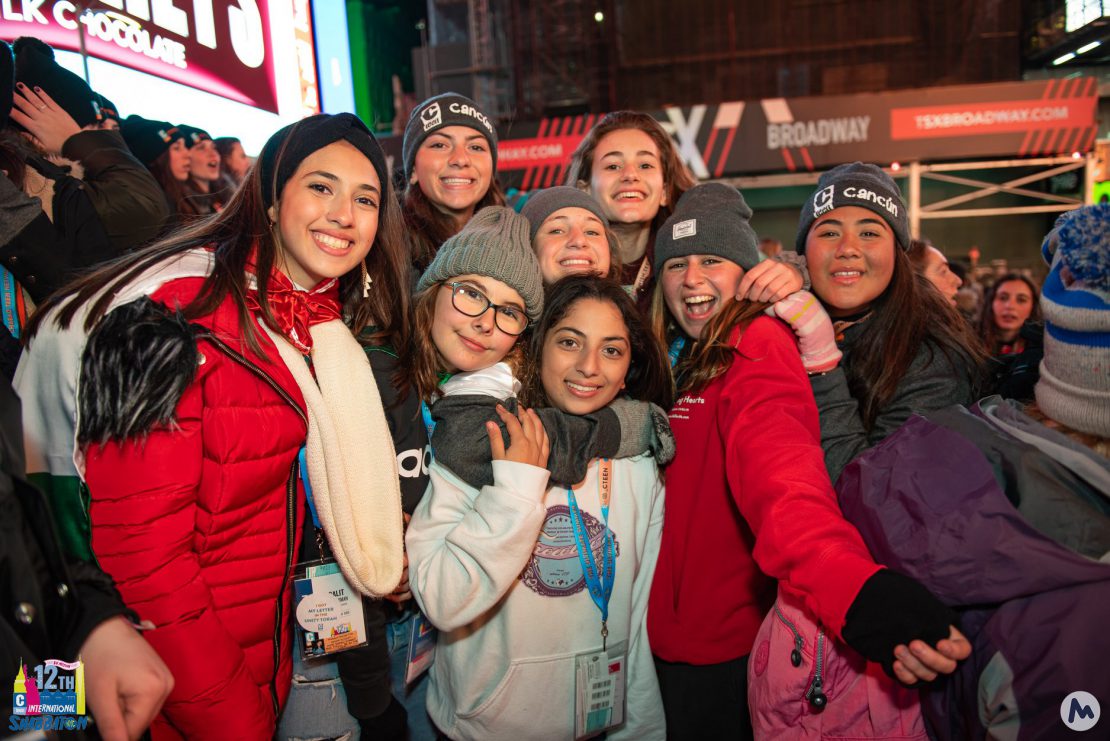 Saturday night, the iconic billboards of Times Square, New York streamed videos of the Lubavitcher Rebbe as the famous red steps disappeared under a crowd of teens. Two thousand and seven hundred high school students, from six hundred and twenty cities in twenty-four countries around the world, gathered at the center of the “City That Never Sleeps” for a Havdalah ceremony and live concert with Chassidic singer, Benny Friedman.

After spending a Shabbat together in Crown Heights, Brooklyn, the teens were energized and exuberant. The square reverberated and the crowd pulsated as they sang along to hits like, ‘I’m a Jew and I’m proud’ and ‘Just One Shabbat.’ Their enthusiasm never waned during the two-hour event, outside, in frigid eighteen-degrees.

Organizers of the 12th Annual CTeen International Shabbaton themed their programming around the idea of “Soul Care.” Workshops and activities challenged the 14- to 18-year-olds to think about the dichotomy between the needs of their body and their soul. “Just like you put on extra layers to keep your body warm now, you must take care to keep your soul warm and exercised,” Rabbi Moshe Kotlarsky, Vice Chairman of Merkos L’Inyonei Chinuch, the parent organization of CTeen, enjoined the teens at the Satuday night concert.

The weekend’s takeaway was pronounced. “I’m going to take so much away from this. I will spend more time with my family on Shabbat; I made so many new Jewish friends too,” said Eliana Namdar from Great Neck, NY. Like Eliana, this was Kedem Bar’s third time attending the Shabbaton. “It’s the most amazing experience of my life. I look forward to it every single year and look back on it every single day,” said the Canadian from Edmonton, Alberta.

For Aileen, who joined from Venezuela, attending the Shabbaton gave her a chance a chance to meet Jewish friends, “I got to meet people my age and find out we have so much in common,” she said. Leeron Cohen from Bellevue, Washington agreed. “Back home, there aren’t so many of us so it’s nice to see here so many Jewish people coming together as one community.”

Sara Steinmetz brought nine teenagers from her CTeen chapter in Sarasota, Florida. “Being part of CTeen imeans our kids get to see they are part of something much bigger than our small community,” she said. For many, the Shabbaton is the first chance the teens have to observe a full Shabbat, sans phone, which, in these days of hyperconnectivity, cannot be underrated. “I watch them and they’re really talking to each other, they’re fully immersed in the classes and lectures with no distractions. We can’t give them that back home,” she said.

Yarin Cohen and Amit Mlynski traveled from Gadera, Israel. “It was very inspiring to do Shabbat with everyone. It was fun to just talk and not be with our phones, or doing all the things we would in Israel,” Amit said. “CTeen is for everyone. We came to experience something we hadn’t felt before and when we visited the Ohel we felt a holiness there,” Yarin added, noting what, for him, had been a highlight — the teens visit to the Rebbe’s office, home, resting place, and synagogue. 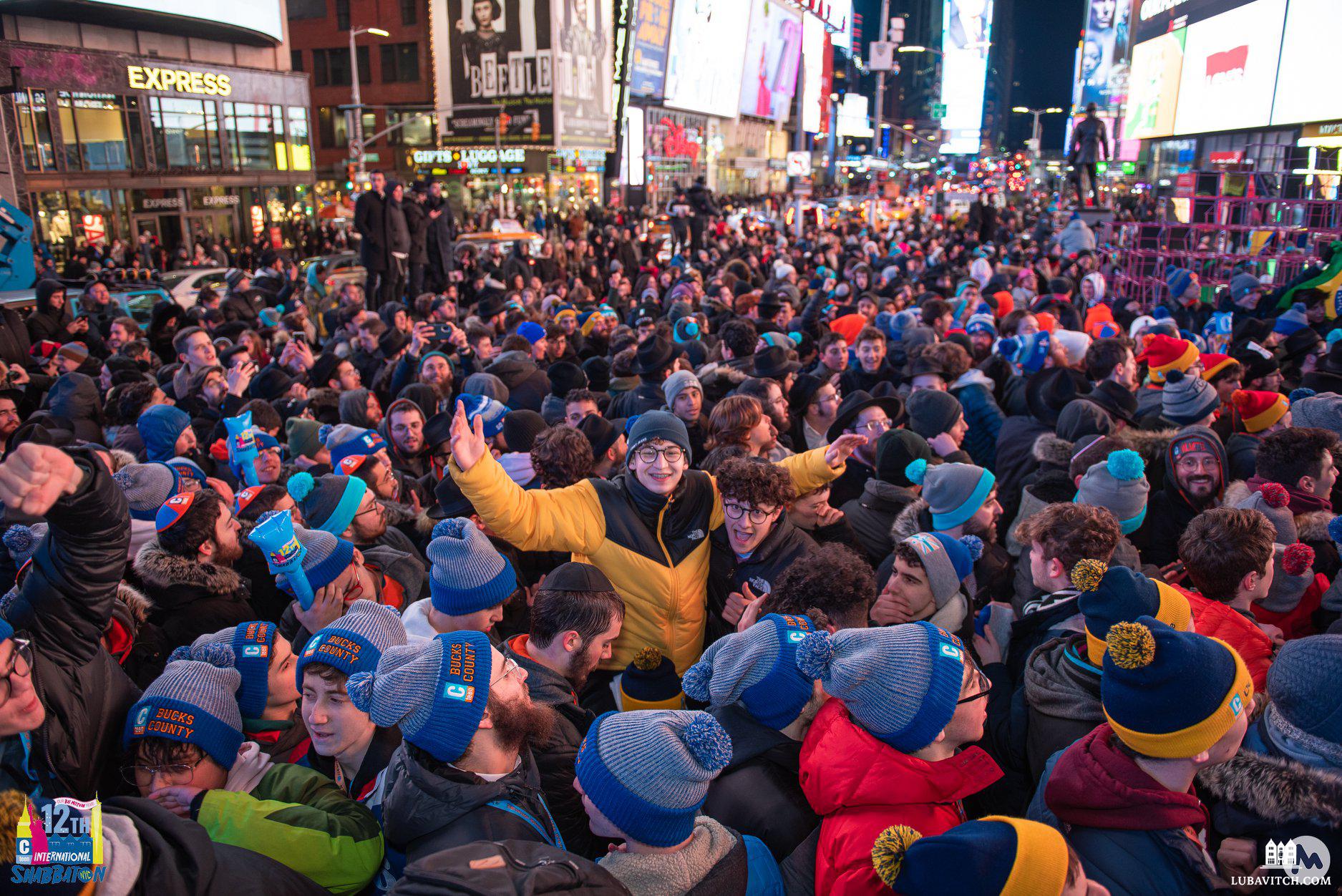 On Sunday morning, the teens gathered for a closing ceremony and brunch at the New York State Armory in Williamsburg, Brooklyn. Four teens took to the stage to share the impact their involvement with CTeen had on their lives and to encourage their peers to make the most of the opportunities their local chapters bring.

Rachel Wilkes Goffstein and Joey Goffstein told the story of how they first met at a CTeen Shabbaton and the journey that led to their marriage and their current role as directors of CTeen Hallandale, Florida (The story can be read here on Lubavitch.com).

The speeches concluded to raucous applause that was followed by a musical interlude. All were on their feet, many with their arms around their neighbor’s shoulders, swaying to the Chassidic nigun of ‘Tzomoh Lecha Nafshi (my soul thirsts for You [G-d]).’

Before heading home, the teens undertook their annual mitzvah pledge — a communal commitment to a single mitzvah. Whereas in the past eleven years, the pledges were focused on self-improvement, this year, continuing the “‘Soul Care” theme, the teens resolved to help others ‘stretch their soul’s muscles.’ They will give Shabbat candles and holiday supplies to their classmates and friends, becoming mitzvah ambassadors. “If this Purim, two thousand teens give another two thousand teens a mishloach manot package, how many people will have partaken in the mitzvah of Purim,” Gabby Scheinert from Hallandale, Florida declared. “We resolve to become a team of personal soul trainers.”

Empowered to take care of their own souls and to reach out and touch the souls of others, the teens returned home. They carry the responsibility to become ambassadors of Judaism in Sydney, Australia; Manchester, UK; Moscow, Russia; Rio de Janeiro, Brazil and Paris, France. As Eliana from Great Neck, NY put it, “We are all so different. We all come from different backgrounds and parents and families, but we have one thing in common and that’s us being Jewish. It’s the biggest blessing ever and I will take that and share it.” 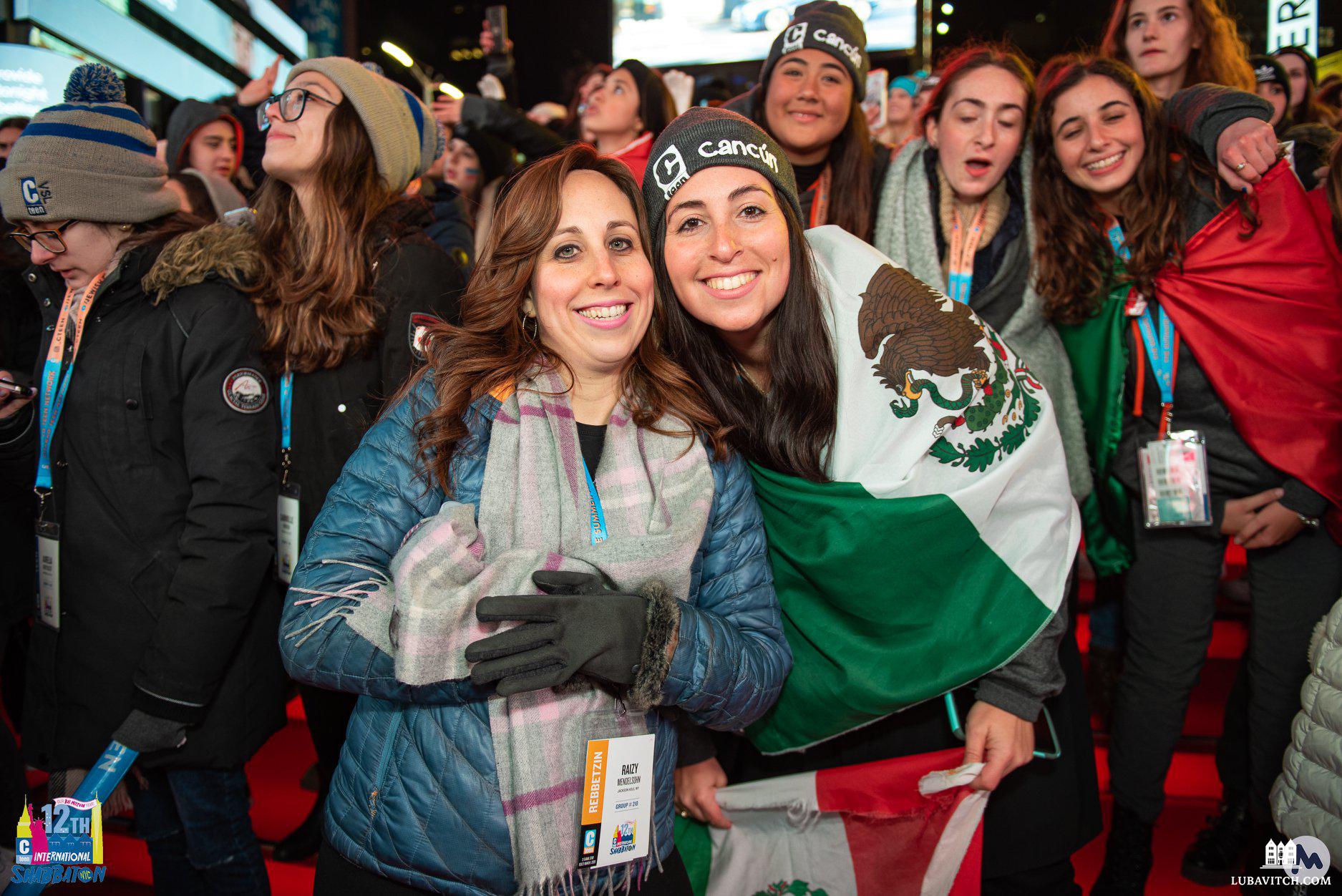 A synopsis of the messages the four teen speakers shared at Sunday’s closing plenary.

From Shame To Pride

Shai Fichtelberg, 16, of Sonoma County, California said she hid the fact that she spoke Hebrew, had a Bat Mitzvah and celebrated “other” holidays from her friends for fear of being different. When local shlucha, Altie Wolvovsky, invited her to a Shabbaton in New York in 2018, she went along because “it sounded fun.” It turned out to be a pivotal experience when she met teens who told of how they wore their kipa at public school or stood up to blatant antisemitism.

“I learned that I had an inner purpose. I realized I was born for a mission only I could accomplish. I may not have always seen myself as a proud Jew, but suddenly I was a teacher.”

Shai tracked down the only Jewish staff member at her school and coopted her help to start the first Jewish club in Santa Rosa. The fifteen members meet every Wednesday and Shai brings kosher snacks and teaches a Torah class. “You don’t need a long white beard to teach others. You don’t even need to know all the letters of the Hebrew alphabet. Whatever you know, you can teach others,” she told her peers.

Not A Jew At Heart

Growing up in Omer, in Israel’s Negev, surrounded by Hebrew, falafel stands, and stars of David, Ori Artzi, now 19, felt very Jewish. When he studied for his Bar Mitzvah with Chabad Rabbi Yudi Pelman, he joined CTeen and began to wonder, “Was being Jewish about eating hummus and singing ‘Oseh shalom’? Was being Jewish even possible if I didn’t learn about it?”

The summer of his Bar Mitzvah year, Ori joined CTeen Israel’s travel camp to Europe. With prayers at the beginning of each day, blessings recited before eating, and ending each time by singing Shema, Ori finally felt he was “living Jewish.” Once he returned to Israel, he bought a pair of tefillin that he now brings to school every day to share with his friends. “Just like doing exercise ‘at heart’—surrounding ourselves with gym equipment, or studying it’s effects— doesn’t satisfy the body, being Jewish at heart doesn’t satisfy the soul,” he said. “Go for gold, when you have the opportunity to do a mitzvah, just do it.”

Seventeen year-old Daniella Futoran grew up in Roslyn, New Jersey hearing horror stories of her parents’ childhood in Communist Russia and how they would secretly observe Jewish practices at risk of death. When she was eleven, her dad was diagnosed with cancer and a little over a year later she watched “the man whose toes I’d danced on be laid to rest.” As Daniella searched for unadulterated truth in the aftermath of tragedy, she found a family at CTeen of Roslyn that she said “helped me shape my outlook in responding to adversity. Life is this glorious, complicated, and chaotic gift that has the potential to be so cruel and to be so wonderful. We all have our own set of challenges, but we can choose whether we perceive them as dirt or potential, darkness or dawn,” she said.

“I’ll never forget the moment, as I first stood in Times Square, the Rebbe’s face projected on the jumbotrons, his voice came through the speakers,” Sara Hedvat, of Great Neck, NY shared. In the clip, the Rebbe was talking to young children, telling them that the entire Sefer Torah is not complete if even one letter is missing. “You are never too young to make a difference, I realized as chills ran through my whole body,” she said.

Though she had just observed Shabbat for the first time in her life, Sara decided to start keeping Shabbat back home. At first, her friends thought she was crazy, but two years later, she tells how they visit on Saturday and leave their phones at home. At this year’s Shabbaton, Sarah celebrated her 104th Shabbat. “CTeen’s mantra has become mine — there is power in youth. Some say being a teenager is our biggest weakness. Let’s show the world that it’s actually our biggest strength,” she concluded. 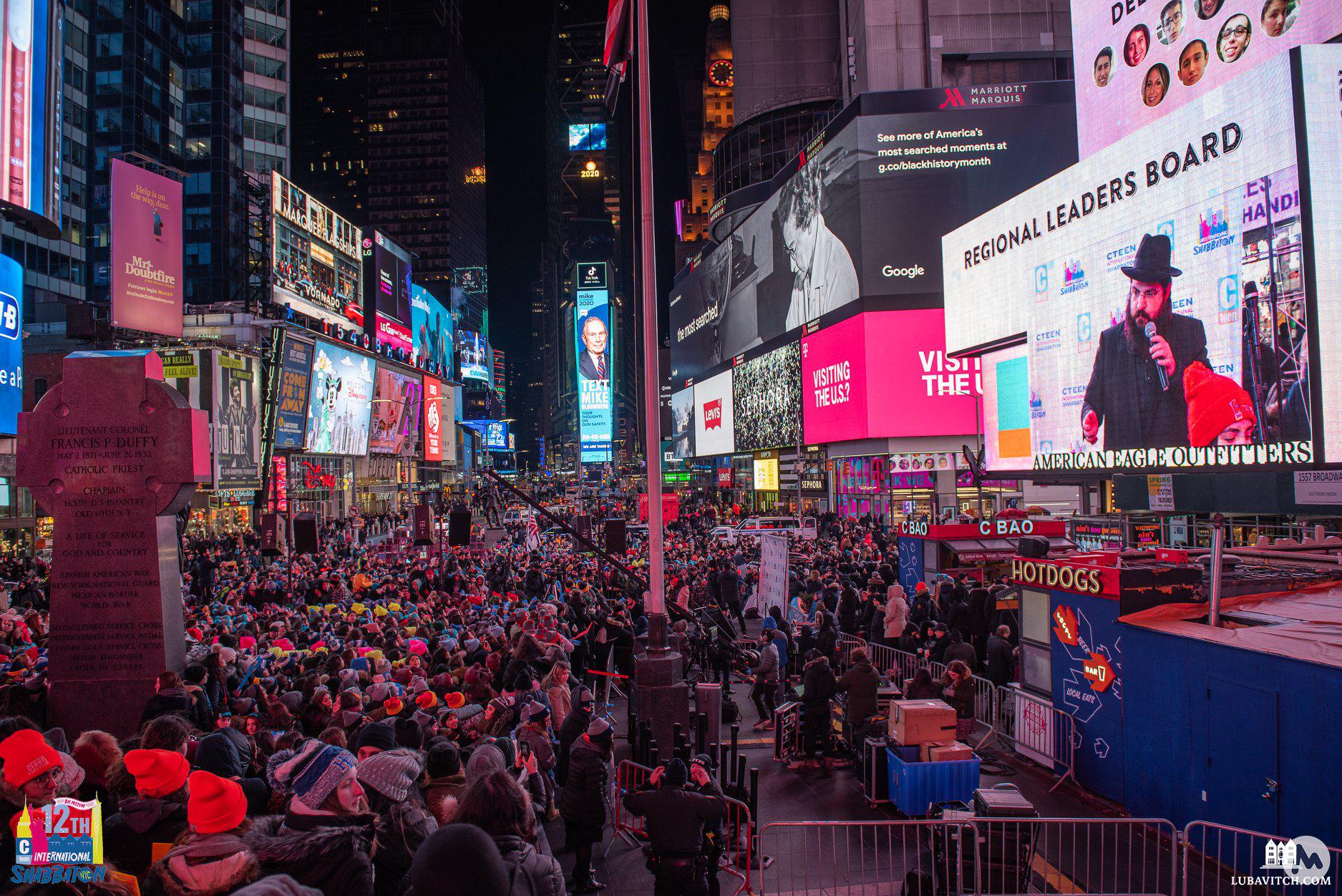 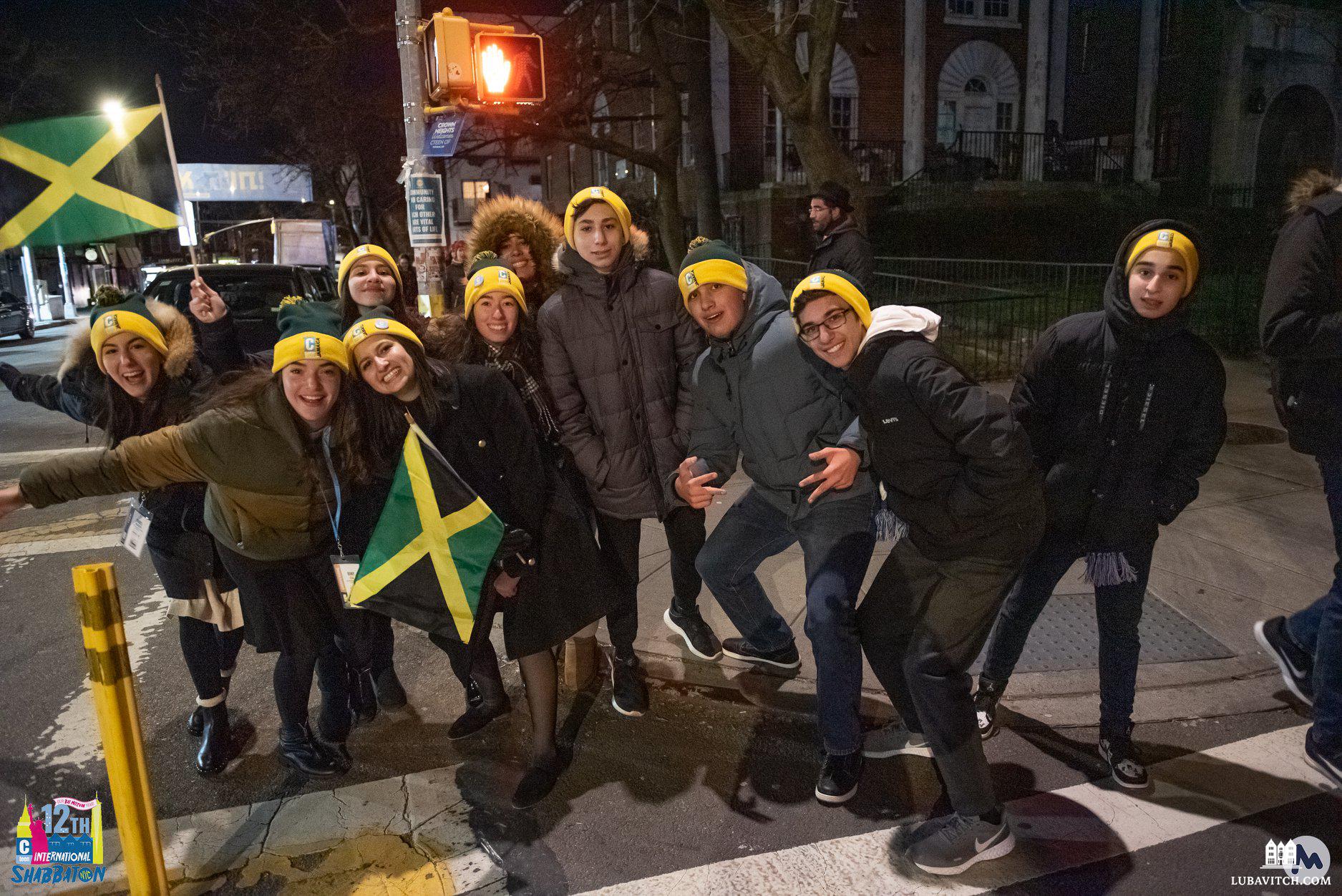 Related Articles
View All
Meet Hallandale’s New CTeen Directors
That’s the winter I met the guy who would, some years later, become my husband. I met Joey at the CTeen International Shabbaton in New…
Cteen Judaism 101 in University Today
This fall, some 100 teenagers are expected to register as Yeshiva University non-matriculated students in a ground-breaking course on the tenets of Judaism. In conjunction…
Florida Chabad Tackles Mental Health Conditions
“I was shaken,” Ella remembers. “She told me how her mother walked in as she was swallowing pills, intent on ending her life. And I…
CTeen
Trailblazing Former CTeener to Open Innovative Atlanta CTeen Center
Once a CTeener himself, Dovid Goldschmidt and his wife Talya are opening an innovative CTeen center in Atlanta, GA.
CTeen
Triple the Numbers! CTeen Summer Inspires Jewish Pride for Public School Students
Yakov Vinnik went from being asked to wrap tefillin at the White House, to sharing the mitzvah with a fellow Jew in Warsaw, Poland. That's…
CTeen
LIVE: CTeen Jewish Pride in Times Square
Jewish teens gather in New York City in an uplifting display of Jewish pride and unity; featuring a special Havdalah ceremony, meaningful inspiration and an…
CTeen
CTeen Shabbaton Brings 2,500 to New York
a plethora of workshops and discussion groups aim to give teens the ability to find strength in their Jewish identity, no matter the circumstances
Get Inspiration to your inbox!
Newsletter
Join our weekly newsletter for inspiration and updates
Donate
Find Your Local Chabad Center
Subscribe
|
Log In
Chabad
About Chabad-Lubavitch
About Chabad Lubavitch
The Rebbe
Headquarters
Magazine
Magazine
News
News & Updates
In The Media
Impact
Social and Humanitarian
Social and Humanitarian
Education
Education
Community
Community