Chabad of Sarasota promotes awareness and training locally and abroad 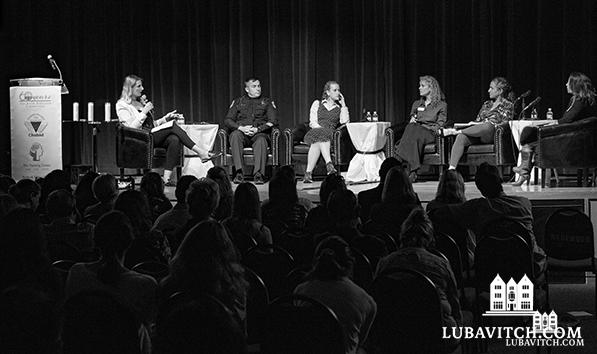 Ella Steinmetz, CTeen director of Chabad of Sarasota, Florida, has her antennae up. She hadn’t realized how pervasive mental illness is among teens, until one she met casually mentioned that she just got out of the hospital. “You know, the Baker Act,” the teen said placidly.

The Baker Act is a Florida law that allows people who are considered a threat to themselves to be involuntarily held in a mental health treatment center for up to seventy-two hours.

“I was shaken,” Ella remembers. “She told me how her mother walked in as she was swallowing pills, intent on ending her life. And I felt terrible that I had not noticed that this teen was struggling.” The warning signs were all there, Ella says, “But I didn’t recognize them.”

Ella, who organizes programming and events for local Jewish teenagers, has since become active in bringing awareness and training to those around her. Soon after this encounter, she launched an evening of awareness called “One Thing I Wish You Knew.” The event, developed in conjunction with certified SafeTALK trainers Rabbi Yarden Blumstein of Chabad of West Bloomfield, Michigan and Leigh Hershkovich-Ioffe of Philadelphia, featured four teenagers who shared their journey through mental health conditions. Three hundred people turned up.

Ella (third from left), with the teen coordinators.

According to the National Alliance on Mental Illness, approximately 1 in 5 youth aged 13–18 (21.4%) experiences a severe mental disorder at some point during their life. For children ages 8–15, the estimate is 13%. Given that two-thirds of those affected by mental health conditions are undiagnosed or untreated, the talks inspired many teens to reach out for help.

Capitalizing on the momentum, Ella and Rabbi Mendy Levy from Chabad Chaplaincy Network and Rabbi Shalom Kessler, director of UMatter in Boca Raton, organized a three-hour suicide prevention training for thirty-five Florida rabbis and forty of their community members. “These rabbis are often the first people to be reached out to,” Ella says, “And there’s just not enough awareness of the do’s and don’ts of prevention.” The workshop, given by SafeTALK, a suicide pervention program, taught the participants to recognize and engage with people having suicidal ideations and connect them with available resources. “Many people just don’t know what role, as a non-professional, they play in such a situation,” Ella says. “One of the things we did was practice asking the question, ‘are you having suicidal thoughts?’ which can be really hard to bring up sometimes.”

Now, she and a board of four teens are arranging a second SafeTALK event, this time in Sarasota. Three workshops for teens and adults are planned for September eighth and ninth, and are sponsored by Jewish Family & Children Service, Brandi’s Wish, Compeer, and Gelt Financial. Mia Schneider, entering tenth grade, is a member of the board and was the emcee at the original “What I Wish You Knew” evening. “I’m passionate about this project because I see too many people around me affected by mental health challenges,” she says, “and too many adults who don’t understand the minds of teenagers and are not equipped to help.” After the first event, she said so many of her peers reached out to her and she was able to get them help. “I knew what to do, and that’s so important.”

The board of the “One Thing I wish You Knew” planning for the event.

In Delray Beach, a few miles north of Boca, Mr. Jack Miller of Gelt Financial is also concerned about the mental health situation in the Jewish community. “We’re living in the best possible time in all of Jewish history, but for some reason, we’re struggling with mental health at a staggering rate, everyone is affected,” he told Lubavitch.com. He feels that Jewish leadership and institutions aren’t doing enough to address these kinds of social issues, “so when I heard that Chabad had given a suicide prevention workshop in Boca, I immediately jumped on board.”

He reached out to Ella and encouraged her to take project nationally, offering to fully subsidize SafeTALK trainings at any U.S. Chabad center that wishes to participate. “We have a responsibility to support each other, and now we can reach so many more people.” Together with Hershkovich-Ioffe, the team will arrange the entire event, from customizing PR material to setting up on site.

If there’s one thing Mia hopes peple will walk away with from the training, “it’s what not to say. Some words, while well intentioned, can exacerbate the situation.” Ioffee-Hershkovich, Miller and Steinmetz are working on organizing trainings in various Chabad centers all over the U.S. “I just want to spread awareness, it’s at the essence of what Chabad does,” Ella says.

Mia Schneider introducing the “What I Wish You Knew” event