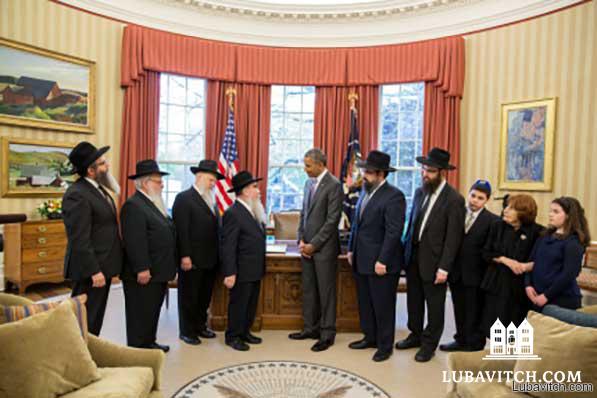 President Barack Obama presents a ceremonial copy of the Education and Sharing Day Proclamation that he issued on March 31, 2015 to a delegation from the American Friends of Lubavitch in the Oval Office, April 27, 2015.
Photo Credit: The White House Photo/Pete Souza

All News
By The White House , Washington, DC

On Monday, April 27, President Obama welcomed a delegation from Chabad-Lubavitch into the Oval Office to commemorate Education and Sharing Day, USA. Established by Congress in 1978 to honor the life’s work of Rabbi Menachem M. Schneerson (1902-1994), the Lubavitcher Rebbe, Education and Sharing Day provides an opportunity to focus on education’s importance and recognize the contributions Rabbi Schneerson made during his lifetime in the fields of education and morality, ethics and justice.

In addition to issuing an annual proclamation, every President since the establishment of Education and Sharing Day has invited a delegation from the Chabad-Lubavitch movement into the Oval Office. The delegation included the leadership of American Friends of Chabad-Lubavitch, Rabbis Abraham and Levi Shemtov; Rabbi Yossy Gordon from Chabad on Campus; Rebbetzin Chave Hecht, a pioneers in girls’ education who has been teaching for more than 70 years; and Menachem Benjaminson and Chaya Goldstein, two children who are leaders in Chabad-Lubavitch children’s service organization, the Jewish Children’s Corps.

President Obama presented the nine-person delegation with a framed, commemorative copy of this year’s proclamation, which was signed on March 31, 2015, noting his appreciation for the Rebbe’s lifetime of work and recognizing that education is among many shared Jewish and American values – values that have shaped and strengthened his own connection to the Jewish community.

The President called combating rising anti-Semitism a moral obligation and emphasized that he will continue to raise the issue with other world leaders.

Finally, the delegation recited the blessing typically made upon meeting a head of state and presented the President with a menorah bearing an inscription, which reads in part:

Mr. President, you represent the middle flame, which stands on a higher plane, dedicated in service to others and the greater good, carrying the dreams and aspirations of an entire nation upon your shoulders.

Related Articles
View All
President Obama Proclaims Rebbe’s Birthday as Education & Sharing Day USA
Education Lessons from President Reagan’s Speech
On the Chabad calendar, and in Jewish communities worldwide, today, the 11th of Nissan, is celebrated as the birth date of the Lubavitcher Rebbe, Rabbi…
Flashback: President Johnson’s Proposal
In this week's Flashback! we've uncovered an interesting press release by our news service from 1965, in which the Lubavitcher Rebbe endorsed President Johnson's proposal…
Remembering President Reagan
As the nation pays final tribute to President Ronald Reagan, Chabad-Lubavitch recalls a very warm, supportive rapport between the President and the Lubavitcher Rebbe, Rabbi…
Welcome To A New President
(lubavitch.com) The idea of “e pluribus unum” (out of many – one) that appears on U.S. currency, sums up the American democratic process. A government…
Celebrating A Vision: A Chabad Representative Reflects on the Lubavitcher Rebbe’s Legacy
He stood on the sidewalk in front of 770 Eastern Parkway, long hair down to his shoulders, a yarmulkah precariously perched on his head. Visibly…
Education
I Will Learn It on a Train, I Will Learn It in the Rain
What was once the province of an elite few is now available for free online in every language
Education
Vienna Springs into Action to Take In Ukrainian Students
The Lauder Chabad School in Vienna is going to extreme lengths to accommodate 700 Ukrainian refugee families—free of charge.
Education
110 Schoolchildren Show Off Jewish Knowledge at Championship Game Show
On March 13th, one hundred and ten Jewish schoolchildren marched into a Princeton, New Jersey ballroom for CKids’ annual JewQ International Torah Championship 5782 and…
Education
Tuesdays With Steve
Berger’s pomegranate trees are so verdant that every student picks his own glossy red fruit to bring home each Rosh Hashanah
Get Inspiration to your inbox!
Newsletter
Join our weekly newsletter for inspiration and updates
Donate
Find Your Local Chabad Center
Subscribe
|
Log In
Chabad
About Chabad-Lubavitch
About Chabad Lubavitch
The Rebbe
Headquarters
Magazine
Magazine
News
News & Updates
In The Media
Impact
Social and Humanitarian
Social and Humanitarian
Education
Education
Community
Community