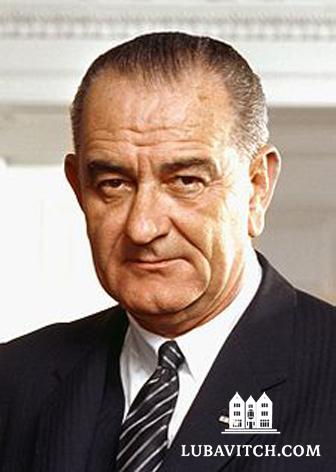 In this week's Flashback! we've uncovered an interesting press release by our news service from 1965, in which the Lubavitcher Rebbe endorsed President Johnson's proposal that the federal aid education bill also include various provisions for the secular departments of parochial schools.

NEW YORK (LNS) – President Johnson's proposal that the pending Federal aid to education bill include various provisions for assistance to secular departments of Parochial schools, was welcomed here by the Lubavitcher Rebbe, Rabbi Menachem M. Schneerson, as "a step in the right direction."

In a statement released through his secretariat, the world leader of the Lubavitcher movement announced his approval of the President's program. He assured his support of the measure "even though it does not yet satisfy all the justifiable demands of the secular departments of the Parochial schools for Federal aid."

"The most incisive comment that can be made in this regard," the statement says, "is that the real merits of the program will depend on its actual execution, namely, how, and by whom, the program will be administered, and how the funds will be distributed. The extent of the benefit to Jewish day schools will thus depend on the executors of the bill."

The Rebbe was one of the first Jewish proponents of Federal aid to Parochial schools, and has for long emphatically urged – in public addresses and statements – legislation in favor of such assistance.

"I must reiterate a view which I have voiced before," the statement reads. "It is the need to make sure at the outset that those groups and individuals who have placed themselves on public record in vehement opposition to Federal aid to Parochial schools should be excluded from administering the program. It will be no revelation to add that efforts are already in progress, on the part of antagonists to Federal aid to nonpublic schools, to either thwart its passage in Congress, or, failing that, to grasp the administrative end of the program, to make themselves the interpreters and distributors of the funds."

"I must also emphasize again one crucial aspect of the controversy, namely, that the prepondering majority of the Jewish antagonists of Federal aid to Parochial schools are those who are opposed to the very idea of Parochial schools. Many of them have the main say in the distribution of Jewish Federation funds, and resist support of Yeshivoth and day schools, either by giving them miserable token allocations, or by totally excluding them from any allocation."