Welcome To A New President 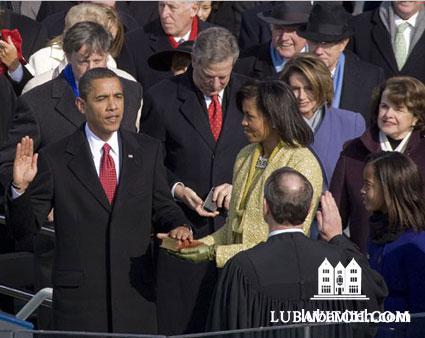 In January 1981, the Lubavitcher Rebbe, Rabbi Menachem M. Schneerson, of blessed memory, spoke about the inauguration of  President Ronald Reagan. The following excerpts were adapted from his remarks.

(lubavitch.com) The idea of “e pluribus unum” (out of many – one) that appears on U.S. currency, sums up the American democratic process. A government is installed when the "pluribus," the many, participate in free and true elections, thus ensuring a smooth transition of power from one administration to the next. The entire purpose of any election is the unity that will be its consequence; for once the majority has expressed its choice, even the dissenting minority must unite behind that decision.

In the case of Presidential elections, those who cast their ballot for a different candidate, representing different policies, must now, after the elections, also accept the victorious candidate as their President. And the reverse is also true: The victorious candidate is not only the President of the majority that elected him, but also of the minority which opposed him. He must fulfill his Presidential duties with complete integrity, not differentiating between those who previously voted for or against him. He is the President of America—of all Americans.

[With regard to the outgoing president, even a defeated incumbent] Torah bids us to be grateful and to acknowledge those good things that he accomplished.

In beginning his new term in office, the President must work vigorously to reinforce our foundational values. The first of these is plainly stated on every dollar bill printed in the U.S.A: “In G-d We Trust.”

The use of the word trust in this context, where belief or faith may have alternatively been used, suggests a personal relationship with G-d. One might believe in G-d- but not to the extent that one puts his trust in G-d. As in the business world, where assets are given to another to be held in trust, so too, our relationship with G-d must evoke a sense of trust and confidence that every detail of our lives can be safely entrusted to G-d.

In leading the nation, the President shoulders the responsibility to foster unity, respect and peace among its citizens. These values are ultimately most effectively cultivated where trust in G-d prevails. The only way to assure that such conduct will become second nature is through the proper education of our children.

In the U.S., the state is responsible for the education of its citizens. It is thus the respon-sibility, and indeed privilege, of the public school system to instill in their charges the knowledge that G-d is not only the Creator of the world, but a Being in Whom we trust. It is this knowledge which is the foundation for a life of productivity and morality.

In no way does this challenge the principle of separation between religion and state, which was never meant to imply antagonism, or even indifference, to religion. Historically, the founding fathers were refugees from religious persecution, and hence, when founding this country, sought to ensure that there would be no interference by the state in the religious beliefs and practices of its citizens. Their intention was to safeguard against any form of religious intolerance or persecution.

Today, however, separation of religion and state has been taken to extreme, if not absurd lengths. Any attempt to help parents defray the costs of educating their children in the way they feel proper is met with outbursts of protest and condemnation. But actually the reverse is true; such financial aid is not incorrect. It is not illegal. It is perfectly within the boundaries of the Constitution. Indeed, to withhold finances from religious schools is tantamount to religious persecution! For it is the inalienable right of every parent to give his child a true education. And since in public schools one cannot receive any religious education whatsoever parents are forced to build their own schools. Yet they are still required to pay, through their taxes, for the public schools.

But even financial help such as that described above is not enough. Every child, including those attending public school, must be inculcated with that belief printed on our currency- "In G-d We Trust,” a principle that is common to all faiths. This should be the very foundation of education, with each day beginning with a non-denominational prayer affirming our trust in G-d.

Real life experience proves that children absorb moral values by daily acknowledging this axiom. Trust in G-d, knowledge of G-d, helps children check their temptations to do wrong, and ensures that as they grow, they negotiate choices and make decisions with a higher awareness. The consequences of a generation reared without any knowledge of G-d are obvious: Today's adults, products of public schools, feel no responsibility to train or influence their children, resulting in the frightening state of our society.

May it be G-d's will that this nation conduct itself in all its matters with truth, peace, and well being.