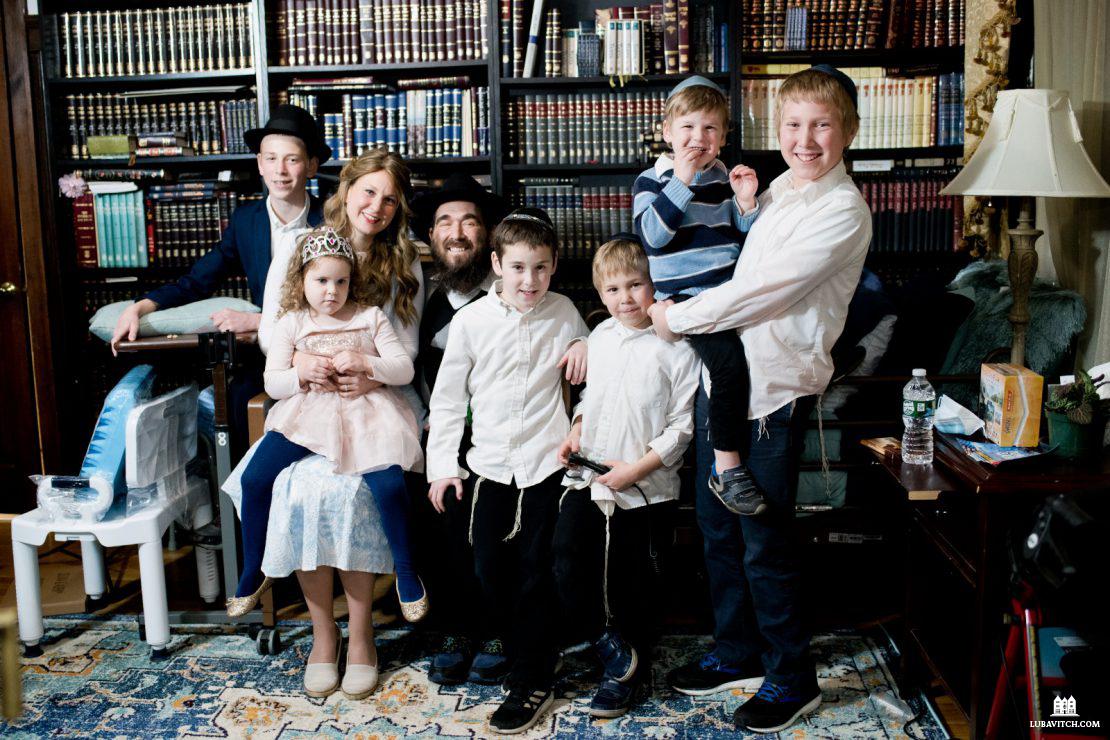 “This is the moment I have been praying for from the moment I woke up at NYU this summer,” said Rabbi Yudi Dukes, Thursday, appropriately, on Thanksgiving Day.

After 242 days at NYU Langone, and a series of life-threatening health complications, the 38 year-old father of six was finally allowed to return home while waiting for a liver transplant.

Dukes contracted the COVID-19 virus in March, when he became critically ill. The director of Chabad’s Jewish Learning Network (JNet), he spent months on a ventilator, suffered lung collapse, a stroke, numerous infections, and liver failure. But Yudi, his family and thousands of friends and wellwishers from around the world who joined in his wife Sarah’s campaign of prayers for her husband’s recovery, are giving thanks for Yudi’s homecoming, appropriately, on Thanksgiving.

Since her husband fell into a coma, Sarah penned almost daily facebook posts, galvanizing prayers and mitzvahs for her husband’s recovery. A composer and singer, Sarah drew on her faith and strength to support her children and inspire friends with messages of optimism as her husband’s life hung in the balance.

“There is a lot of pain and chaos in the world, and we have so many questions. Why is G-d doing this? Why do we have to go through this? What else does He want from us? “ she wrote in a recent post, having learned that Yudi will require a liver transplant. “I have learned to allow myself to be human by asking the questions, but to not spend too much energy on trying to figure out the answers. I have to keep going. Once it’s beyond my understanding, I have to trust that G-d knows exactly what He is doing and that G-d is all good, even when this good is hidden from us.⁣”

Sara helped her children make a colorful sign that read, “You did it!” and asked hospital staff to hang it directly across from Yudi’s bed so when he woke up—she was certain he would—he would know they believed in him and in his recovery.

After five months on ECMO with many setbacks along the way, Yudi finally regained consciousness in August. As he moved from the ICU to rehab and back to the ICU twice following bouts of sepsis as a result of extensive bile duct damage, through thirteen room changes, the sign came with him. A few weeks ago, Yudi asked Sara to help him alter the sign.  “That should be ‘WE’. I didn’t do this on my own. This only happened because of what everyone has done. We did this together,” he said.

And yesterday as Yudi was wheeled out of the hospital accompanied by Sara and their two eldest boys, he held the sign aloft as he expressed his thanks. “I am grateful that I can breathe on my own. I am grateful for the medical care I have received. I am grateful to our amazing community, who have supported us. I am grateful to the Rebbe and my Chasidic education, which has given me the lens to view this all as an opportunity for growth and to help others. Most of all, I am grateful for my wife, who has held our family together through this ordeal.”

“I am the most scared I have ever been and the most grateful I have ever been,” Sarah wrote. “As Yudi is discharged from the hospital, Yudi and I want to make it clear that we all did it. We all played an instrumental role in Yudi’s miraculous recovery and in getting him to this point. We did it as a team, an army; nothing could penetrate through us as a united front. We were completely invested in every way.

“We have helped Yudi survive, and now we will help him thrive as he continues on his path to recovery and resilience. Please continue to send prayers and positive energy for Chaim Schneur Zalman Yehuda ben Hinda Yocheved to have a complete recovery”.

Related Articles
View All
covid-19
A Canceled Bar Mitzvah, A Heartwarming Wave Of Support
As Gedaliah recovered in bed, his phone sprang to life with a ping. "Mazel Tov Gedaliah!"
covid-19
Healthcare for the Body and Soul
Chabad at forefront of vaccine distribution effort in Ukraine
covid-19
Jewish Day Schools Make The Grade
Amid a national discourse about the transformation of America’s school system in the wake of the pandemic, Jewish day schools are enjoying an unexpected boost:…
covid-19
Four Brit Milot, Four Cities, Four Days
It was a whirlwind week for Rabbi Yossi Simon, director of the Chabad House of Golders Green in London, England. The rabbi, who is also…
Get Inspiration to your inbox!
Newsletter
Join our weekly newsletter for inspiration and updates
Donate
Find Your Local Chabad Center
Subscribe
|
Log In
Chabad
About Chabad-Lubavitch
About Chabad Lubavitch
The Rebbe
Headquarters
Magazine
Magazine
News
News & Updates
In The Media
Impact
Social and Humanitarian
Social and Humanitarian
Education
Education
Community
Community