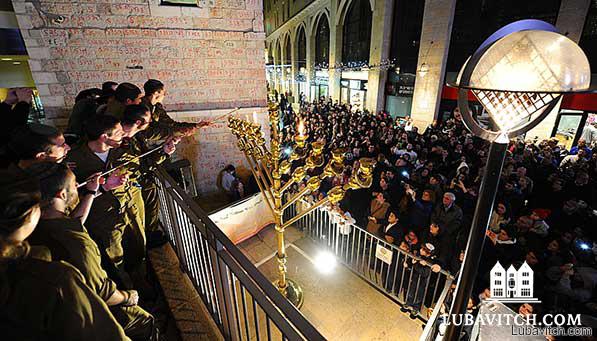 Chanukah is over, but the inspiration shared at many of the Chanukah events reverberates yet. At least a thousand people came out to celebrate at a menorah lighting saluting some 100 IDF Lone Soldiers. The event, hosted by Chabad of Talbiya and Chayal el Chayal at Jerusalem’s famous Mamilla Mall, packed a powerful message of caring and sharing this Chanukah.

Lone soldiers, as they are known, driven by a love for Israel and a commitment to the Jewish people, come from abroad to serve in the IDF, leaving their families behind. Holidays, when many soldiers are relieved and get to go home to their families, can be difficult for the lone soldier.

At the menorah lighting, the soldiers, on the top tier of the mall, were cheered by the crowd from below. “Tonight, we were not ‘lone’, we felt appreciated and celebrated by so many fellow sisters and brothers who came to show their support,” one soldier said of the event. “We felt like soldiers of one huge, united family.”

The event was sponsored by the Glowinsky family of Toronto, Canada, and was part of the Light Up Mamilla project, led by Rabbi Eli and Chana Canterman, Chabad representatives to Talbiya, in Jerusalem.

“Every Jew, no matter where they stand, has a history, destination and truth, as ordained by G-d,” said Rabbi Rabbi Eli Canterman. “We need to shine that light into the world with strength and radiance, so all the nations of the world, including our enemies, will see that light.”

And shine the light they did. On the first night of Chanukah, the families of Operation Protective Edge, who lost family members during this past summer’s battle, lit the menorah. The event was organized together with Chabad Terror Victims Program.

On the second night children with special needs and volunteers from Talbiya’s branch of and Friendship Circle were honored.

“We wouldn’t miss a Friendship Circle party for the world,” said Oren, father of 5 year old Joey, who watched as a choir of teens with special needs sang Chanukah songs and lit the menorah. “Here, there are no mistakes made. Whatever Joey does here, is acceptable, as it’s all about acceptance and friendship.”

On the third night new immigrants to Israel were honored. With the last night, an overflowing crowd of 1500 attended, to celebrate the bright future of Jewish children.

Related Articles
View All
Council of Europe Leader Honors Chanukah
Chanukah, it turns out, is a favorite with the Secretary General of the Council of Europe, Thorbjørn Jagland.
Menorah at the Kremlin
At the Kremlin, Aleksander Torshin, Acting Chairman of the Russian Parliament, lit the shamash candle, and congratulated thousands of Jews celebrating Chanukah. “Mazel Tov and…
German Interior Minister Notes Berlin Chanukah Miracle
At the Brandenburger Gate, where Germans once marked the rise of the Nazi party and Hitler announced his plans to make the world Judenrein, thousands…
Baltimore’s City Hall Unveils Large Menorah
When a Chabad rabbi visiting Baltimore’s city hall last year Chanukah was greeted by a small menorah dwarfed by the dominating seasonal displays, he suggested…
Florida Stolen Menorah Replaced with Bigger One
When a nine-foot menorah standing outside the Chabad House in Boca Raton, Florida, was stolen last year, the rabbi promised that if that menorah was…
From Banks to Office Buildings: Proud to Have Their Own Menorah
It is now forty-one-years since the first Chanukah menorah went up in the public sphere by Chabad-Lubavitch. More recently this phenomenon has been taken on…
#ShareTheLights: Menorah’s Message to Millions
Now trending, the hashtag #ShareTheLights is getting millions of people in on the Chanukah tradition of sharing the lights and the inspiration of this ancient…
Holiday & Shabbos
Lag B’Omer Innovation Under Lockdown
On Monday evening at 18:00 sharp, 45,000 individuals tuned into the livestream at 18for18.com.au. Narrated and presented by children and individuals from Jewish communities across Australia…
Holiday & Shabbos
A Shabbat Dinner for Wine Country Survivors
With California’s wine country reeling from this week’s horrific wildfires—the most destructive of their type in California’s history—Chabad of Sonoma County is rallying the forces…
Holiday & Shabbos
Moving Out
To get her sukkah to Inwood Park in Manhattan on Sunday, artist Shaina Denburg detached its walls. But even in pieces, it didn’t fit in…
Holiday & Shabbos
A First for Sukkot in Shanghai
Rabbi Shalom Greenberg has celebrated Sukkot in Shanghai every year since 1998, but this year’s the first that he’s been able to legally import the…
Get Inspiration to your inbox!
Newsletter
Join our weekly newsletter for inspiration and updates
Donate
Find Your Local Chabad Center
Chabad
About Chabad-Lubavitch
About Chabad Lubavitch
The Rebbe
Headquarters
Magazine
Magazine
News
News & Updates
In The Media
Impact
Social and Humanitarian
Social and Humanitarian
Education
Education
Community
Community