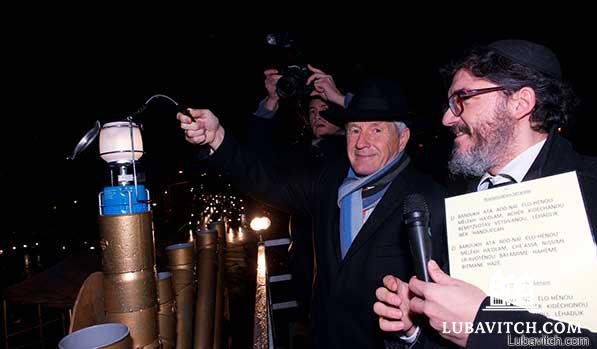 Secretary General of the Council of Europe, Thorbjørn Jagland, at the annual menorah lighting in Strasbourg, France.

Chanukah, it turns out, is a favorite with the Secretary General of the Council of Europe, Thorbjørn Jagland. He joined Chabad-Lubavitch of Strasbourg, France, led by Rabbis Shimon and Mendel Samama, at the lighting of a thirty-foot menorah at the center of the Place de Bordeaux.

“Chanukah is my personal holiday, the message is to share the light and religious freedom and this is one of our main purposes at the Council of Europe, to share tolerance and to be understanding of others,” Jagland, who lit the shamash the menorah’s assistant candle, told a crowd of some 800 who came to celebrate.

The Secretary General takes a leading role in the Human Rights, democracy and state of law in Europe, and has defended religious freedom and Jewish observance at a time when many European countries are challenging Jewish ritual observances such as circumcision and schechita—or kosher animal slaughter.

Jagland is, also the president of the Nobel Peace Prize committee, wished the people a “Chanukah Sameach!”

Related Articles
View All
Baltimore’s City Hall Unveils Large Menorah
When a Chabad rabbi visiting Baltimore’s city hall last year Chanukah was greeted by a small menorah dwarfed by the dominating seasonal displays, he suggested…
Menorah at the Kremlin
At the Kremlin, Aleksander Torshin, Acting Chairman of the Russian Parliament, lit the shamash candle, and congratulated thousands of Jews celebrating Chanukah. “Mazel Tov and…
German Interior Minister Notes Berlin Chanukah Miracle
At the Brandenburger Gate, where Germans once marked the rise of the Nazi party and Hitler announced his plans to make the world Judenrein, thousands…
Chanukah at Sporting Events
This year’s Chanukah will be celebrated at more than a dozen sporting venues. To read about these, go to As American as Apple Pie: Chanukah…
Texas Gov’s Most Memorable Moment: Dancing with the Rabbis
“It’s been fun,” Governor Rick Perry told reporters of his life as Governor. “Some of you got to watch [my son] Griffin walk in the…
Holiday & Shabbos
Lag B’Omer Innovation Under Lockdown
On Monday evening at 18:00 sharp, 45,000 individuals tuned into the livestream at 18for18.com.au. Narrated and presented by children and individuals from Jewish communities across Australia…
Holiday & Shabbos
A Shabbat Dinner for Wine Country Survivors
With California’s wine country reeling from this week’s horrific wildfires—the most destructive of their type in California’s history—Chabad of Sonoma County is rallying the forces…
Holiday & Shabbos
Moving Out
To get her sukkah to Inwood Park in Manhattan on Sunday, artist Shaina Denburg detached its walls. But even in pieces, it didn’t fit in…
Holiday & Shabbos
A First for Sukkot in Shanghai
Rabbi Shalom Greenberg has celebrated Sukkot in Shanghai every year since 1998, but this year’s the first that he’s been able to legally import the…
Get Inspiration to your inbox!
Newsletter
Join our weekly newsletter for inspiration and updates
Donate
Find Your Local Chabad Center
Chabad
About Chabad-Lubavitch
About Chabad Lubavitch
The Rebbe
Headquarters
Magazine
Magazine
News
News & Updates
In The Media
Impact
Social and Humanitarian
Social and Humanitarian
Education
Education
Community
Community