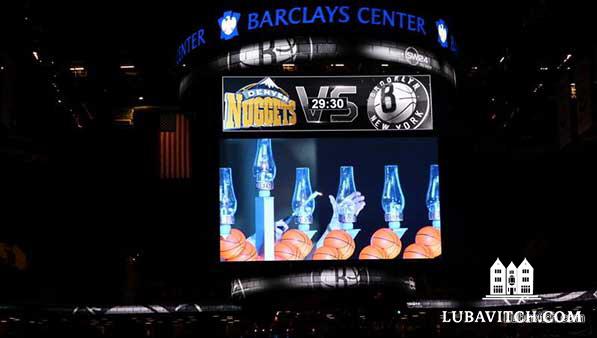 This year’s Chanukah will be celebrated at more than a dozen sporting venues. To read about these, go to As American as Apple Pie: Chanukah at the Stadium. Here is a sampling of those events.

At the Houston Rockets vs. New Orleans Pelicans game at the Toyota Center in Houston, Texas, there will be a menorah lighting at halftime, a pre game Chanukah party, including a meet and greet with Rockets players and a post game free throws on the court. Fans coming to the Golden State Warriors game vs. the Sacramento Kings at the Staples Center, in Los Angeles, California, will receive a commemorative Warriors Jewish Heritage scarf. At the Florida Panthers vs. Washington Capitals game at the BB&T Center in Sunrise, Florida, there will be a grand Chanukah concert.

More events: The Nets at the Barclays Center in Brooklyn, New York; Spurs at the AT&T Center in San Antonio, Texas; Heat at the American Airlines Arena in Miami, Florida; Celtics at the TD Garden, in Boston, Massachusetts; Predators at the Bridgestone Arena in Nashville, Tennessee; Carolina Hurricanes at the PNC Arena in Raleigh, NC; Red Wings at the TVA Joe Louis Arena in Detroit, Michigan; and Blue Jackets at the Nationwide Arena, Columbus, Ohio.

Related Articles
View All
As American as Apple Pie: Chanukah at the Stadium
Over a dozen sports stadiums will be hosting Jewish Heritage Nights during the Chanukah holiday, an event that has become popular with sport fans.
Chanukah: Miracle Of The Ages For All Ages
Siblings create a Chanukah dreidel top out of Knex in Yardley, Pennsylvania. Below students make their very own Chanukah jelly doughnuts and a senior in…
Home Depot, Lowes, Partner With Chabad For Chanukah
Partnering with Chabad, major hardware store chains such as The Home Dept, Lowes and Ace Hardware, will bring Chanukah crafts to dozens of locations across…
Vice President to Attend National Menorah Lighting
U.S Vice President Joseph Biden will participate at the lighting of the National Menorah with Chabad-Lubavitch on the first night of Chanukah, December 16th.
From Banks to Office Buildings: Proud to Have Their Own Menorah
It is now forty-one-years since the first Chanukah menorah went up in the public sphere by Chabad-Lubavitch. More recently this phenomenon has been taken on…
Holiday & Shabbos
Purim Notes From The Chasidic Rebbes
Mordechai “The Jew” Mordechai was a Benjaminite, but he is called “Yehudi,” literally meaning a descendant of the tribe of Yehudah. Likewise, the Megillah refers…
Holiday & Shabbos
From Fruits to Roots
Two generations came together to celebrate Tu B’Shevat, the New Year for trees, at the Friendship Circle of Free Hebrew for Juniors in Montreal, Canada,…
Holiday & Shabbos
Tu B’Shevat: Where’s the Fruit?
But in fact this plant-based holiday takes place in the middle of winter. Considering that the fruits of the trees haven’t yet begun to grow,…
Holiday & Shabbos
Ancient Scroll Sparks New Journey For Iranian Teen
It was about thirty years ago when an old Sephardic Jew named David Abtan walked into my office and said ‘Rabbi, I need a favor…
Get Inspiration to your inbox!
Newsletter
Join our weekly newsletter for inspiration and updates
Donate
Find Your Local Chabad Center
Subscribe
|
Log In
Chabad
About Chabad-Lubavitch
About Chabad Lubavitch
The Rebbe
Headquarters
Magazine
Magazine
News
News & Updates
In The Media
Impact
Social and Humanitarian
Social and Humanitarian
Education
Education
Community
Community