As American as Apple Pie: Chanukah at the Stadium 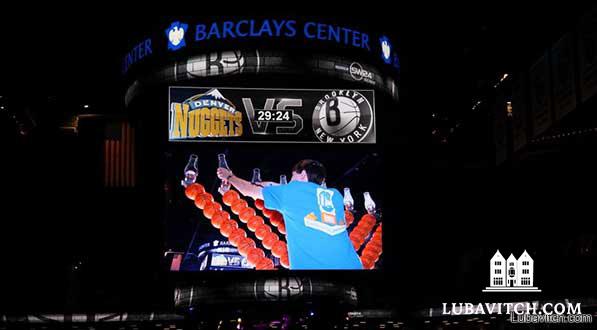 Chanukah with the Chabad Teen Network and the Nets at the Barclay’s center in Brooklyn, NY.
Photo Credit: Bentzi Sasson

The Atlanta Hawks had just finished their basketball game when Jewish music pounded through the speakers, and rabbis and fans got up to dance around the menorah in the center of the basketball court. For Emily Hanover who organized on behalf of the Hawks with Chabad of Atlanta, last year’s event, “was one of the proudest moments of my career.”

Over a dozen sports stadiums will be hosting Jewish Heritage Nights during the Chanukah holiday, an event that has become popular with sport fans. Given the enthusiasm generated by last year’s event, the Hawks decided to place Chanukah center stage at halftime and have a Jewish Heritage Night experience. Over one-thousand locals are expected to join the event.

“We are really pumped, super excited,” said Hanover, whose family is coming to attend the event from Baltimore. This year’s Chanukah ceremonies will include special lighting with the court looking like a menorah, videos produced for the occasions and a Family Fun Zone with live Chanukah entertainment, crafts, games and Judah the Maccabee.

Michael Berenbaum, Professor of Jewish Studies at the American Jewish University and Executive Editor of the Encyclopedia Judaica, has looked at the way Chabad relates to American culture. “I think Chabad has learned more about America, far more about America than virtually every other Jewish organization,” he said. “It has learned to speak in American idiom. It also seeks to take part in American culture.”

The author of eighteen books and scores of scholarly articles, Berenbaum observes that Chabad shluchim, themselves steeped in Jewish tradition and practice, are savvy in their use of technology to promote Judaism.

“Chabad has understood how to market in American culture, in its use of technology, even technology they don’t particularly encourage,” he told lubavitch.com.

Over Herring and Football

It all began in 1987 when the Lubavitcher Rebbe, Rabbi Menachem Mendel Schneerson, put out a call to reach more Jews and engage them in the Chanukah holiday’s celebrations. Rabbi Raphael Tennenhaus had been hosting an annual Chanukah event that attracted several thousand locals in Miami, Florida. “I wondered where is a good place to reach more Jews than we are already reaching,” Tennenhaus said.

It dawned on him to ask Billy Robbie, a good Christian who enjoyed attending the services at the Chabad of South Broward in Hallandale, Florida, with his university friend Abrahum Weisman. He especially enjoyed the pickled herring at the Shabbat meal. Billy Robbie was the son of Joe Robbie, the then owner of the Miami Dolphins.

Robbie liked the rabbi’s idea of making a grand event at the Joe Robbie Stadium. He setup a meeting with the president of the team. “They were excited, but they let us know that the game is going to be live on ESPN and we needed to keep our program in halftime to five minutes. If we went over time, we’d be fined $5,000 for every minute,” the rabbi says.

Tennenhaus went for it. The stadium was covered with bold signs: “NFL: Night of the Festival of Lights,” and at half time, a grand Menorah was wheeled into center field. Live on ESPN, the cantor bolted out the blessings, lit the Menorah, the Chabad rabbis danced and Tennenhaus spoke.

The ever energetic Tennenhaus says that the fines he’d accumulated didn’t matter. “There were hundreds-of-thousands of proud Jews watching the scene and 15,000 of them in the crowd.” The opportunity to share Jewish pride, openly, in an American sports arena, was a rare, gratifying experience.

While waiting for the bill from the NFL, Tennenhaus met a local Reform rabbi, who told him that he and his colleagues have been preaching the idea of not exhibiting one’s Jewish identity in the open. “You just killed it,” he told Tennenhaus.

Tennenhaus, who had since given four invocations at the stadium, says that he still has not received the bill from NFL.

From Israel to Atlanta

Soon Chabad centers began working with their local stadiums. This year in Israel, activities at sports stadiums will be accelerated. “Every basketball game will have a Chanukah menorah lighting,” says Rabbi Yaakov Gloiberman, a Chabad representative in Lod, Israel. Not much of a sports fan himself, he is known as the “Basketball Rabbi” in Israel for bringing Judaism to sports games. The Israeli Basketball Association produced special kippah head coverings and candles for fans to take home with them and light their own menorah.

Back in Atlanta, the event, says Rabbi Levi Mentz, a local Chabad representative, fosters feelings of unity and cohesiveness among the Jewish community.

For Hanover who has already consulted several other sports teams on making their own Jewish Heritage Night with Chabad, including the Denver Nuggets and the Washington Wizards, “it is all about the community, doing things that inspire people and having a great day to celebrate Chanukah with lots of fun,” Hanover said.