A Menorah With A Past Donated To Chabad of Ottawa 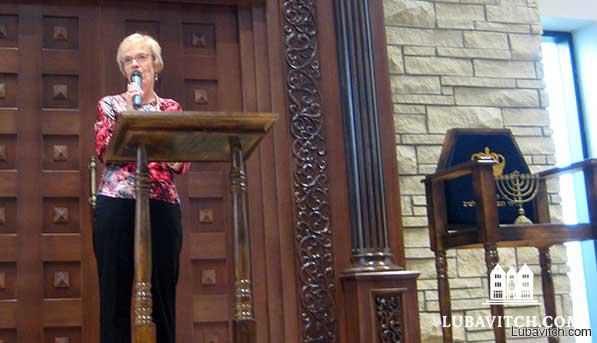 Susan Bloomfield, tells the assembled about the Menorah, passed down through her Christian family. Below: Bloomfield’s grandfather Bernie Richel, shortly after his arrival in Canada in 1925 and Bloomfield giving the Menorah to Rabbi Mendel Bloom.

A brass Chanukah menorah that survived the ravages of WWII and had been in the hands of a Christian family for three generations was donated by a family member to the Chabad Ottowa Torah Center last week. It will be kindled this Chanukah, December 16, for the first time in many decades.

Susan Bloomfield, who inherited the menorah given in thanks by a grateful Jewish family who had been saved by her great uncle, made the decision to restore it to the Jewish community, where it would be used, she said, “the way it should be.”

The story of this menorah began during the Nazi occupation of The Hague, where Bloomfield’s extended family resided. In May 1940, after the German army invaded Holland, men and women familiar with Nazi behaviors formed the Dutch Resistance, an organization that forged ration cards, collected intelligence, published an underground paper and sabotaged phone lines, among other disruptive activities. The riskiest activity, by far, was the sheltering of refugees and Jewish families.

Jan and Gerard Richel joined the Dutch Resistance and Gerald made a decision that would resonate down through three successive generations: he deliberately hid a Jewish family in his own home’s cramped attic for five years.

Of the estimated 140,000 Jews living in the Netherlands before 1940, only 30,000 survived the war. The Dutch kept excellent civil records, including religious affiliation, making the Nazi’s “Final Solution” goal easy to achieve.

Gerard and his family, good Christians, hid the Jewish family—a mother, father and their teenage son—in their home’s attic, which was only accessible through a door in the bedroom of their own five-year-old son. The Nazis occupying the Hague suspected Gerard of participating in the Resistance, so they searched his home several times during the occupation, at one point driving Gerard himself into hiding to escape arrest.

Susan Bloomfield, the great-niece of Gerard Richel, explained how the hidden family managed to escape detection. “When the Nazi soldiers came to the boy’s bedroom and saw how sick he was, they didn’t bother searching [further].”

The hidden family , especially the teenage boy, was terrified of capture. “When they heard the Nazi soldiers’ loud boots,” Bloomfield said, “he would go into a frenzy. His mother and father had to stuff cloth into his mouth and hold him down until the soldiers left.”

Bloomfield’s family, not having much food themselves and surviving on very little, shared what meager rations they had with the hidden family. When the war ended, Bloomfield said, the Jewish family was grateful to have survived and left a menorah with Uncle Gerard, “Their faith was something that the German soldiers could never take from them,” they had told her uncle.

Bloomfield’s great-uncle wrote long letters to her grandfather, explaining what had taken place during the Nazi occupation. He was horrified at what had happened during the Holocaust. “Grandpa Bernie would translate them into English and read them to my mother, Hendrika [Briard], who was a young girl at the time,” she said. “He wanted to pass on this first-hand account so that generations to come would never forget these atrocities and to do their part to help ensure this never happens again.”

“We didn’t use it. It wouldn’t feel right at all, it would just be not right,” Susan Bloomfield told lubavitch.com. “We kind of felt like imposters having this beautiful piece that is not being used the way it should be.”

The Christian family kept the menorah for years as a valuable reminder of their family history. Recently, Bloomfield decided that the menorah should be returned to the Jewish people and properly used during Chanukah.

She noticed that the Chabad Torah Center was being built a short block away from her home. Once the Center was complete, she reached out to Rabbi Mendel Blum and his wife Dina, who are the Chabad representatives to the Ottawa suburb.

Upon hearing the story, Rabbi Blum asked if Bloomfield would relate her story to the children who attend the Hebrew School. As she did, she noticed that the children’s parents stayed as well, lining the back of the synagogue, listening intently to her recollections.

“I wanted to bring the menorah home and I believe this new synagogue is a really nice home. This is where it is now,” Bloomfield, now a grandmother herself, said. “I’m sure this menorah will be right at home here.”

Daniel Kestenbaum, chairman of the Kestenbaum & Company auction house, told lubavitch.com that he believes the menorah is of German manufacture, circa 1920’s – 1930’s.

The menorah will be permanently displayed at the synagogue and will be kindled each ofthe eight days of Chanukah, this year beginning December 16th.

Accepting the gift, Rabbi Blum said, “It strengthens our connection to that generation and to the same traditions we practice today, as they practiced.”