From Dealing Drugs To Writing Scrolls 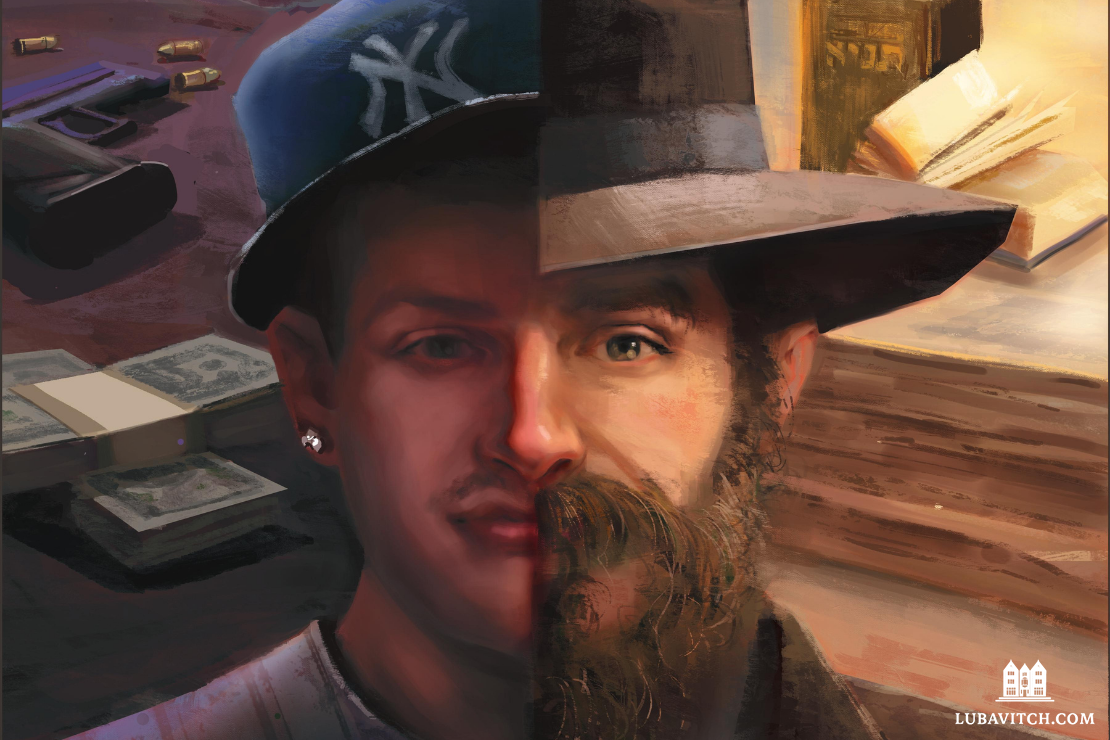 As a young man, Yankel Meislin’s addiction nearly cost him his life. Today he lives in Brooklyn, writes Torah Scrolls, and speaks to people about what he’s learned on the road to sobriety.

Eighteen-year-old Jordan Meislin crammed himself into a white fifteen-passenger van. The palm trees beside the moonlit road reminded him of his childhood when he’d come to South Florida to visit his grandparents. Things were different now. The van dropped its passengers off at a house of worship, as usual. Jordan knew a circle of folding chairs would be waiting for them in the basement, along with coffee and a cigarette. “My name is Jordan Meislin,” he’d say, “and I’m an addict.”

That night’s speaker was an older, grandmotherly woman. “I was reading the Bible,” she began, “when I came across the binding of Isaac.” Meislin’s ears perked up; he recognized that story from Hebrew school. As she described Abraham taking his only son to an altar, Jordan’s world started spinning, and he burst into tears. “It hit a nerve I didn’t know I had,” he says, “there I was, barely hanging on in a rehab a thousand miles from home. I was dragging my parents along kicking and screaming to my own altar — the altar of addiction.”

Growing up in Long Island had been a rough ride for young Jordan. He had difficulty making friends and wasn’t burly enough to defend himself from his bullies. When he fought back with words, he only made more enemies. Almost everyone in his high school experimented with drugs, but Jordan says his rocky social scene and natural intensity made the escape irresistible. It didn’t take long before he had a full-blown addiction and dreamed of being the next Pablo Escobar.

Funding his addiction quickly proved expensive, so the son of a therapist became a drug dealer.

It took years in and out of physiatric wards, and several close brushes with death at the hands of mafia-hitmen and street toughs before Jordan knew he wanted to live. “I was an avowed nihilist,” he remembers with a shutter. “I told myself that if I ever made it to twenty-five, I’d take my own life.” He was convinced that life only went downhill from there. “Society makes you conform after that, and I didn’t want that ever,” he says. But by the time his parents shipped him off to a rehab center in South Florida in 2006, Jordan knew he wanted a better life. “I truly wanted to get sober, another two weeks on the streets, and I’d be dead.”

Sitting in that basement, he let the tears flow freely for the first time. Somehow, he knew straight away how he’d achieve sobriety. “I called up my father and asked him to send the tefillin I’d worn at my Bar Mitzvah,” he says. In the meantime, he started trying to pray. Lacking a Tallit, he wrapped himself in a bedsheet. Until then, his only visible connection to Judaism had been the “Never Forget” tattoo on his wrist, but somehow he now knew G-d was his best hope of getting sober, and he hung on for dear life.

“Can I get you in touch with a rabbi?” the rehab’s director asked one day, noticing Meislin’s obvious interest in Judaism.

It wasn’t long before Meislin was riding to Rabbi Meir Kessler’s home for a Shabbat night meal. The songs were unfamiliar, and the Torah thoughts were new, but mainly he saw trust and honesty. “The last thing you would want would be to let an addict into your home, but Rabbi Kessler made me feel right at home,” he recalls. “And I saw a man who lives by his values. Here you have a guy who wears a beard and a black hat in the middle of Florida. That impressed me.”

Meislin kept coming back, and when he got out of rehab four months later, he moved to an apartment right across the street from the Chabad House. Somewhere along the way, he dropped his old name and became Yankel Meislin. “I started keeping Shabbos, I started keeping kosher, I even quit a job at an ice cream shop because I wouldn’t be able to eat the food there anymore,” Yankel laughs. He read all the Jewish books he could find and began to rethink his life trajectory.

He started attending Palm Beach Community College and quickly became president of the campus Chabad Club. But after just eight months, an old face from his underworld days showed up on campus, and Yankel was out. “He had robbed me, this guy,” Meislin remembered with horror, “That was too close, way too close.” By then, he knew he wanted to go to yeshivah to immerse himself fully in a Jewish lifestyle. Leaving Florida, Yankel spent just one week at home in New York before exchanging his old life for a ticket to Israel.

The following months were very intense, but nonetheless transformational for Yankel. Ensconced in a little English-speaking Chabad yeshivah in a Hebrew-speaking country, there weren’t many people with whom he could talk. The schedule called for lots of Torah study, and Yankel soaked it in. “Every new thing I learned took me one step further away from my past life,” he explains. He even taught himself Yiddish and translated the Lubavitcher Rebbe’s talks into English on the side.

During his third year in Israel, Yankel got married and moved with his wife to the famous religious neighborhood of Bnei Brak. While continuing his studies, he started looking for a way to support his family. Meislin consulted with his teacher, and concluded that “my options were to become a shochet (kosher slaughterer) or a sofer (scribe).” With his history, even a whiff of violence was out of the question, so he started taking private lessons in the art of Jewish calligraphy.

“It’s not as easy as it seems,” he soon learned. “It was difficult. I broke a lot of knives and needed a lot of bandaids ironically.” Still, he persevered, moving his growing family to the mountain city of Tzfat to better hone his craft. “In safrus, it takes a little while before you start making money.” It was tough going, and Tzfat isn’t known for a booming economy. But after his fifth year in Israel, he had just enough money to cover the move back to America. Settling his family in Crown Heights, Brooklyn, he says he found good mentors, and with time, his career took off.

“I strongly believe that the way to sobriety is through G-d and Judaism,” he says while sitting in his Brooklyn office. Quills, ink, and rolls of parchment are neatly packed away on big wooden shelves lining the walls. With careful attention to detail, he spends his days here writing Megillos, Mezuzos, and Torah Scrolls.

For years, he tells me, he’s shared his story at small gatherings, even driving hours to talk to yeshivah boys in Pennsylvania or New Jersey. His hard-won lessons, he hopes, can help give perspective to others facing their own struggles.

But sharing his past is also personally healing for Yankel. Empowering even. He’s been thinking through his story with a coach and says the most significant realization he’s had is “how easy it is to hold ourselves back.” Says Yankel, “I realized that there were so many lies I was telling myself that made me smaller than I could have been.” For him, growing means he’s now much more comfortable sharing his story. He now travels to speak publicly about his experiences and is in the process of writing a memoir.

Yankel Meislin lives in Crown Heights, Brooklyn, with his family. He is a sofer, public speaker, and author. He also coaches private individuals, building on the perspective he has gained from his life experiences.