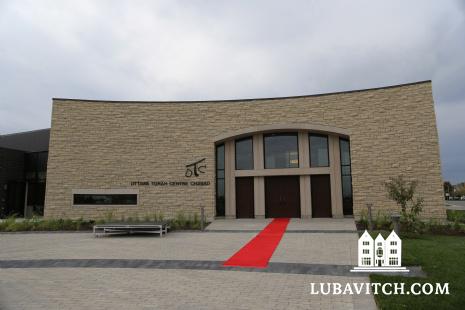 The new center in the Barrhaven suburb of capital of Canada.

Building a community from the ground up takes patience. The Chabad representatives serving the Barrhaven suburb of Canada’s capital took many community-building steps before crowning it with a $4.5 million edifice that garnered the Mayor’s City Builder Award.

Arriving seventeen years ago, Rabbi Mendel and Dina Blum, the only Jewish leadership in the area, chose to create a Jewish infrastructure where there was none. The Ottawa Torah Center Chabad is the first synagogue building to be built to Ottawa in three decades.

Ten years ago they began searching for a larger location. They learned of a new development and approached the developer about selling them a large parcel of land at the center of the project. A deal was struck and now the plans for the development included the synagogue.

In the interim, while plans for the new building were in development, the Blums expanded their space to include several storefronts, and moved several trailers on the property where they conducted classes.

At the groundbreaking in the summer of 2013, the community turned out in large numbers to support the new endeavor. The building, completed in September, finally gives the community the space it needs with more to grow.

“This is an exciting time for the Jewish community. This is the first synagogue for Ottawa in thirty years,” Ottawa’s Mayor Jim Watson told the crowd. “We are fortunate to have such a strong and vibrant community in Ottawa, as we see here tonight. This beautiful new facility is wonderful news for our community.” Rabbi Blum, said the Mayor, will be the recipient of Mayor’s City Builder Award “for his contributions to Ottawa’s Jewish community and to the community of Barrhaven.”

At the opening in September, community members were proud of the large turnout.

“Rabbi and Dina met person by person, family by family in their non-judgmental connection, no matter their background or affiliation. This is the foundation on which the center was built,”said Perry Medicoff, a member of the community

Rabbi Blum is looking ahead. “We remain focused on how much more we can accomplish. As joyous and as glorious as this day may be, let it not only serve as a celebration for how far we have come, but also as a communal recognition of where we have yet to go.”

Related Articles
View All
Canadian PM Harper Dedicates Chabad Centre Synagogue
{}
Toronto Developer Fulfills Jewish Congregation’s Dream
Toronto developer Mario Romano wanted to give back to the Jewish community that has helped him prosper. But when the 57-year-old donated three acres of…
Chabad of Vancouver Recipient of $1.2 Million Government Grants
The Canadian government bequeathed $633,333 from the Infrastructure Stimulus Fund to Lubavitch BC...
In Remote Halifax, A Jewish Community Comes Into Its Own
(Lubavitch.com/LNS) Nova Scotia’s most populated city with a Jewish community 1800 strong is far, far away from major centers of Jewish life. It’s an eighteen-hour…
Torah Center To Rise in Heart of Montreal
The 7-million dollar, 35,000 square-foot full service Jewish community center and synagogue currently under construction in the heart of Hampstead, marks an exciting milestone for…
Get Inspiration to your inbox!
Newsletter
Join our weekly newsletter for inspiration and updates
Donate
Find Your Local Chabad Center
Subscribe
|
Log In
Chabad
About Chabad-Lubavitch
About Chabad Lubavitch
The Rebbe
Headquarters
Magazine
Magazine
News
News & Updates
In The Media
Impact
Social and Humanitarian
Social and Humanitarian
Education
Education
Community
Community