In Remote Halifax, A Jewish Community Comes Into Its Own 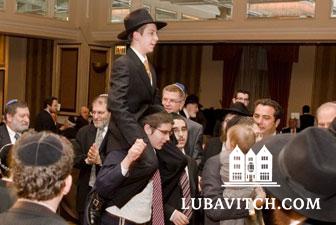 Zevi Feldman at his bar-mitzvah in Halifax.

Small towns have trouble holding onto their spiritual leaders. Add remoteness to the equation and the post becomes a steppingstone for novices, a quiet retirement position for senior leaders, and a spot where growing up with a rabbi who knew you since preschool is a rarity.

Halifax is just such a place.

(Lubavitch.com/LNS) Nova Scotia’s most populated city with a Jewish community 1800 strong is far, far away from major centers of Jewish life. It’s an eighteen-hour drive  from Halifax to Toronto. Twelve from Montreal. There’s no kosher butcher shop, not enough young children for a Jewish day school, and it’ll take an eleven-hour drive to Boston, for a slice of kosher pizza.

After years of seeing young rabbis and their families leave when their own kids turned school age and needed a day school, Marcia Yampolsky of Halifax became reluctant to bond with her local synagogue leaders. “When you live in a place that rabbis come and go, you stop investing in relationships with them. It’s a natural defense.”

Thirteen years ago, Chabad representatives Rabbi Mendel and Bassie Feldman and one month old Zevi moved to Halifax to stay. Chabad representatives who establish new centers are not on a career ladder; their adoptive hometowns are never a stepping stone to someplace bigger, or more glamorous, but a place they’ll call home for life.

“Halifax has truly become our home,” Mrs. Feldman told a crowd of 250 Haligonian friends at son Zevi’s bar mitzvah last week, “and yes, we are here to stay. In fact, most of you even believe us now with the building of our magnificent new Chabad house, which will be completed any day.”

Standing three stories tall, Chabad’s new center, funded significantly by the Rohr Family Foundation, is an outgrowth of the Feldmans’ expanding role in Halifax. Secure in the knowledge that the spiritual leaders in town wouldn’t fly the coop, steady crowds of Haligonians attend Chabad programs.

“Before Mendy and Bassie, we didn’t have a Jewish day camp. We didn’t have women’s programming,” said Mrs. Yampolsky.

Over the last few years, the number of Jewish students attending Dalhousie University in Halifax has climbed from 100 to 700. Friday night dinners for students draw 50 to 70 to the Feldmans’ Shabbat table three times a month. The new Chabad center in Halifax’s downtown area straddles student housing and a Jewish neighborhood allowing the Feldmans to serve both populations. The center will also be home to Chabad’s playgroup for tots, adult education courses, holiday workshops, and guest lecturers.

Much to the surprise of the community, children from the city’s two synagogues attend Chabad’s programs. They send their children to Lubavitch Day Camp each summer. They come to Chabad’s menorah building workshop at The Home Depot. They meet each other at the Feldmans for Bassie’s freshly baked challah on Friday afternoon.  “People say to me all the time, ‘Look how you have succeeded bringing Jewish people together,’” said Rabbi Feldman.

Rabbi Feldman credits his wife’s intuitive grasp of the community’s needs for Chabad’s success. “Bassie’s role is extremely prominent. She organizes every program from a to z. She coordinates everything that happens here in Halifax.”

It’s a role Mrs. Feldman took on from the start, according to community member Lynda Suissa. At Chabad’s first event in a hotel conference room, the Feldmans presented a guest speaker with a meal ala Bassie. “Bassie organized the speaker, booked the hotel, got everything ready. As I was eating the salad, I saw her duck behind the partition to nurse her baby, and I thought, ‘Holy cow, that’s a capable girl,’” Suissa recalled.

From that first event, the Feldmans have been challenging the perceived limits on Jewish life in Halifax, even when it required significant sacrifices on their part. When their first home proved to be too far from the center of Jewish life in Halifax, they moved their entire family and Shabbat meals for students into a centrally located hotel, and they’ve kept up that routine for several years. When son Zevi turned seven, they sent him to New York for second grade.

Their devotion paid off. Their Purim celebration has grown from 8 guests to 150.  Lunch and learn sessions are well attended. Jewish pride has grown.

“Bassie and Mendy are capable and warm and fun and spiritual. Having Chabad has connected our community to the rest of the Jewish world,” said Mrs. Suissa. “I would never have believed this could happen in Halifax.”