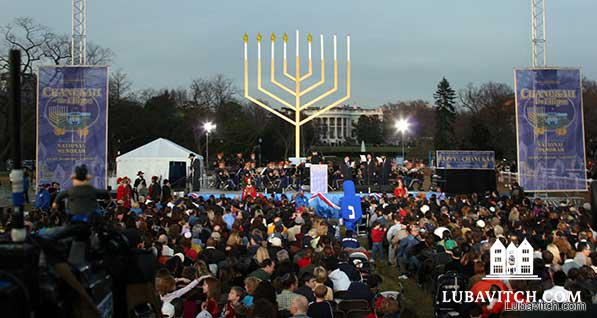 The “National Menorah” in view of the White House.
Photo Credit: Baruch Ezagui

U.S Vice President Joseph Biden will participate at the lighting of the National Menorah with Chabad-Lubavitch on the first night of Chanukah, December 16th at 4:00 p.m.

The tall menorah stands on the Ellipse opposite the White House and the Washington Monument, and has become one of the most visible Jewish icons in the United States. The Vice President will be the second highest ranking official ever to attend the lighting.

In 1979, the year that the National Menorah went up for the first time, President Jimmy Carter participated at the lighting by kindling the shamash, the candle used to kindle the other lights.

The event became a source of controversy, opposed by many who saw it as a precedent-setting breach of the constitutional separation of church and state. Years later, in 1989, that debate was laid to rest when the Supreme Court ruled in favor of allowing the menorah to be erected on public property.

“We are honored that Vice President Joe Biden will be attending the lighting ceremony of the National Menorah on December 16th,” said Rabbi Levi Shemtov, Executive Vice President of American Friends of Lubavitch, which sponsors the annual event.