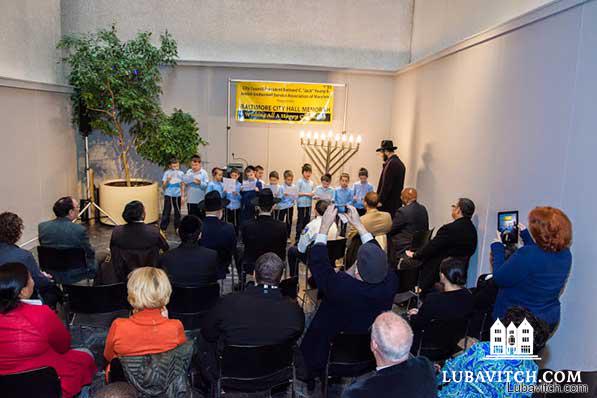 When a Chabad rabbi visiting Baltimore’s city hall last year Chanukah was greeted by a small menorah dwarfed by the dominating seasonal displays, he suggested installing a large menorah on the premises.

Last week the 6-foot Baltimore City Hall Menorah was unveiled as local dignitaries and Jewish leaders presided. “Chanukah is a festival where we celebrate the winning of light over darkness. The menorah is the symbol of that celebration which is why it’s so special to unveil the new City Hall menorah,” Rabbi Chesky Tenenbaum, director of Jewish Uniformed Service Association of Maryland (JUSA of MD), an affiliate of Chabad-Lubavitch of Maryland, told the crowd.

“I’m thrilled to partner with the Jewish Uniformed Service Association to celebrate this wonderful time of the year in the Jewish community,” Council President Young said at the event. “Even if you aren’t of the Jewish faith, this event is an educational experience for children of all ages to come together and learn about each other.”

With reporting by Jeff Cohn of the Baltimore Jewish Life.

Related Articles
View All
#ShareTheLights: Menorah’s Message to Millions
Now trending, the hashtag #ShareTheLights is getting millions of people in on the Chanukah tradition of sharing the lights and the inspiration of this ancient…
Chanukah: Miracle Of The Ages For All Ages
Siblings create a Chanukah dreidel top out of Knex in Yardley, Pennsylvania. Below students make their very own Chanukah jelly doughnuts and a senior in…
Chanukah at Sporting Events
This year’s Chanukah will be celebrated at more than a dozen sporting venues. To read about these, go to As American as Apple Pie: Chanukah…
As American as Apple Pie: Chanukah at the Stadium
Over a dozen sports stadiums will be hosting Jewish Heritage Nights during the Chanukah holiday, an event that has become popular with sport fans.
Holiday & Shabbos
Purim Notes From The Chasidic Rebbes
Mordechai “The Jew” Mordechai was a Benjaminite, but he is called “Yehudi,” literally meaning a descendant of the tribe of Yehudah. Likewise, the Megillah refers…
Holiday & Shabbos
From Fruits to Roots
Two generations came together to celebrate Tu B’Shevat, the New Year for trees, at the Friendship Circle of Free Hebrew for Juniors in Montreal, Canada,…
Holiday & Shabbos
Tu B’Shevat: Where’s the Fruit?
But in fact this plant-based holiday takes place in the middle of winter. Considering that the fruits of the trees haven’t yet begun to grow,…
Holiday & Shabbos
Ancient Scroll Sparks New Journey For Iranian Teen
It was about thirty years ago when an old Sephardic Jew named David Abtan walked into my office and said ‘Rabbi, I need a favor…
Get Inspiration to your inbox!
Newsletter
Join our weekly newsletter for inspiration and updates
Donate
Find Your Local Chabad Center
Subscribe
|
Log In
Chabad
About Chabad-Lubavitch
About Chabad Lubavitch
The Rebbe
Headquarters
Magazine
Magazine
News
News & Updates
In The Media
Impact
Social and Humanitarian
Social and Humanitarian
Education
Education
Community
Community