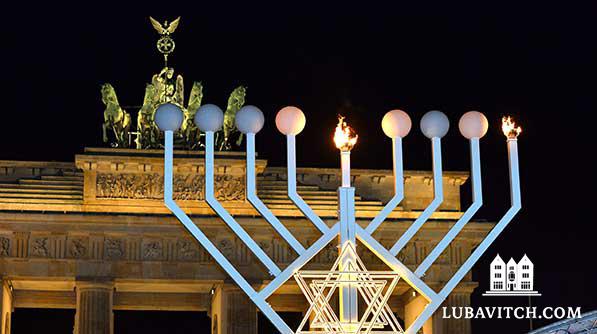 The kindling of the menorah at Brandenburger Gate.
Photo Credit: Photos: David Osipov

At the Brandenburger Gate, where Germans once marked the rise of the Nazi party and Hitler announced his plans to make the world Judenrein, thousands joined government officials for the kindling of the Chanukah menorah.

“This event, in this location where the Nazis once rose, it is indeed a miracle that only a few decades later Jewish life is flourishing in Berlin,” Germany’s Federal Interior Minister Thomas de Maiziere told the crowd.

Related Articles
View All
Menorah at the Kremlin
At the Kremlin, Aleksander Torshin, Acting Chairman of the Russian Parliament, lit the shamash candle, and congratulated thousands of Jews celebrating Chanukah. “Mazel Tov and…
U.S. Vice President Joins Menorah Lighting
“Tonight is about miracles, the miracle of courageous warriors overcoming the great odds,” Biden said, pointing to another noteworthy miracle: “Thousands of years later, Judaism…
Chanukah: Miracle Of The Ages For All Ages
Siblings create a Chanukah dreidel top out of Knex in Yardley, Pennsylvania. Below students make their very own Chanukah jelly doughnuts and a senior in…
From Banks to Office Buildings: Proud to Have Their Own Menorah
It is now forty-one-years since the first Chanukah menorah went up in the public sphere by Chabad-Lubavitch. More recently this phenomenon has been taken on…
Holiday & Shabbos
Purim Notes From The Chasidic Rebbes
Mordechai “The Jew” Mordechai was a Benjaminite, but he is called “Yehudi,” literally meaning a descendant of the tribe of Yehudah. Likewise, the Megillah refers…
Holiday & Shabbos
From Fruits to Roots
Two generations came together to celebrate Tu B’Shevat, the New Year for trees, at the Friendship Circle of Free Hebrew for Juniors in Montreal, Canada,…
Holiday & Shabbos
Tu B’Shevat: Where’s the Fruit?
But in fact this plant-based holiday takes place in the middle of winter. Considering that the fruits of the trees haven’t yet begun to grow,…
Holiday & Shabbos
Ancient Scroll Sparks New Journey For Iranian Teen
It was about thirty years ago when an old Sephardic Jew named David Abtan walked into my office and said ‘Rabbi, I need a favor…
Get Inspiration to your inbox!
Newsletter
Join our weekly newsletter for inspiration and updates
Donate
Find Your Local Chabad Center
Subscribe
|
Log In
Chabad
About Chabad-Lubavitch
About Chabad Lubavitch
The Rebbe
Headquarters
Magazine
Magazine
News
News & Updates
In The Media
Impact
Social and Humanitarian
Social and Humanitarian
Education
Education
Community
Community