Texas Gov’s Most Memorable Moment: Dancing with the Rabbis 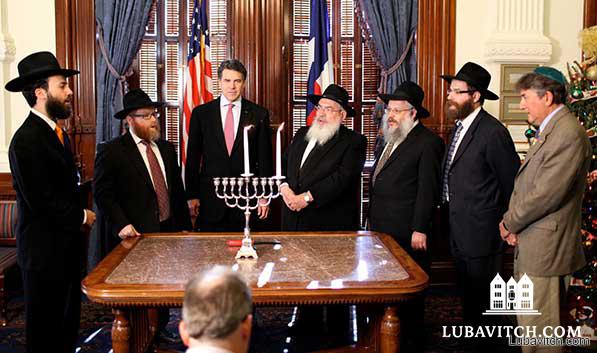 Singing a Chanukah melody with Governor Rick Perry in 2010. (Photos: Office of the Governor)

“It’s been fun,” Governor Rick Perry told reporters of his life as Governor. “Some of you got to watch [my son] Griffin walk in the chamber when he was two-years-old. And now he is thirty-one and got his own babies.”

When asked by a reporter last Thursday what the most memorable moment he had in the thirty years in office, he said it would have to be lighting the menorah and dancing with Chabad in his office.

In 2010 Perry received a group of Chabad-Lubavitch rabbis in the governor’s public reception room, where he lit the shamash, used to light the other candles. Rabbi Yossi Lazaroff, the Chabad representative to Texas A&M University, said the blessings and lit the menorah. The governor looked on as the rabbis then began to sing a traditional Chanukah song.

As the song moved to its fast phase, the governor began clapping with the rabbis, and the crowd spontaneously danced around the governor’s desk. The then 60-year-old governor joined in the dancing. “This is real dancing,” he said,

That video of the governor dancing has become iconic and was played on national television during his presidential bid in the Republican primaries.

When a reporter for the American Statesman jokingly asked him if he was planning on banning dancing at this years Chanukah menorah lighting set to take place on Tuesday, December 16th, outside the Texas State Capitol building. “No, no, no, man. You gotta do the dancing,” the governor said.

Related Articles
View All
Illinois Governor At Chanukah Party in State Offices
(lubavitch.com) Governor Pat Quinn of Illinois attended a Chanukah party on Monday in Downtown Chicago, hosted by Lubavitch Chabad of Illinois. State Senator Ira Silverstein,…
Governor Schwarzenegger Joins Chabad’s Chanukah Celebration
Governor Arnold Schwarzenegger performed a symbolic menorah lighting at the State Capitol today as part of the 12th annual Chabad Chanukah celebration. The Governor joined…
Governor Corzine Celebrates Chanukah With Hoboken’s Jews
Miracles were on NJ Gov. Jon Corzine’s mind when he kindled Chabad of Hoboken’s 6-foot tall menorah at City Hall before a crowd of 300…
Governor Bush Celebrates Opening of 101st Chabad Center in State of Florida
It was not a typical scene in the office of Florida Governor Jeb Bush last Friday, when the governor danced the Hora with rabbis wearing…
Millions Witness Governor Schwarzenegger and Chabad at Menorah
According to Nielson and Media Clips reports released this morning, 114 television stations throughout the United States (with hundreds more throughout the world) ran news…
Holiday & Shabbos
Lag B’Omer Innovation Under Lockdown
On Monday evening at 18:00 sharp, 45,000 individuals tuned into the livestream at 18for18.com.au. Narrated and presented by children and individuals from Jewish communities across Australia…
Holiday & Shabbos
A Shabbat Dinner for Wine Country Survivors
With California’s wine country reeling from this week’s horrific wildfires—the most destructive of their type in California’s history—Chabad of Sonoma County is rallying the forces…
Holiday & Shabbos
Moving Out
To get her sukkah to Inwood Park in Manhattan on Sunday, artist Shaina Denburg detached its walls. But even in pieces, it didn’t fit in…
Holiday & Shabbos
A First for Sukkot in Shanghai
Rabbi Shalom Greenberg has celebrated Sukkot in Shanghai every year since 1998, but this year’s the first that he’s been able to legally import the…
Get Inspiration to your inbox!
Newsletter
Join our weekly newsletter for inspiration and updates
Donate
Find Your Local Chabad Center
Chabad
About Chabad-Lubavitch
About Chabad Lubavitch
The Rebbe
Headquarters
Magazine
Magazine
News
News & Updates
In The Media
Impact
Social and Humanitarian
Social and Humanitarian
Education
Education
Community
Community