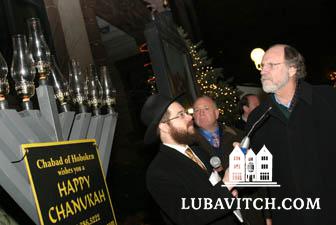 Miracles were on NJ Gov. Jon Corzine’s mind when he kindled Chabad of Hoboken’s 6-foot tall menorah at City Hall before a crowd of 300 on Sunday.

“Miracles do happen in this world when we pray, when we are faithful,” said Gov. Corzine, who survived a near fatal car crash eight months ago. He proved his point by dancing an impromptu ‘hora’ with Chabad of Hoboken’s Rabbi Moshe Schapiro. Hoboken mayor David Roberts and city council members took part in the event.

The eight-day Jewish festival of light that celebrates the miraculous triumph of light over darkness came to close on Tuesday night. On the first night of Chanukah, Corzine lit a Chabad-sponsored menorah in Trenton, NJ.

Manhattan lawyer Vitaly Zurkovsky has attended Chabad’s menorah lighting since he moved to Hoboken in 2002. Seeing Corzine at the lighting was moving and “surreal,” Zurkovsky said.

“To see the governor of New Jersey take time out to attend a menorah lighting in his hometown and in the rabbi’s home for Shabbat dinner brings out a lot of Jewish pride,” Zurkovsky told Lubavitch.com.

Gov. Corzine’s first attended Chabad of Hoboken’s menorah lighting in his Senate days. He has dined at the Schapiro home on the Jewish New Year, Rosh Hashanah. Corzine also joined the rabbi and his wife Shaindel Schapiro in their home for Shabbat dinner.

The Schapiro’s work with Hoboken’s 5000 Jewish residents began in 2001. Their festive holiday gatherings, including Simchat Torah that takes the celebration out into the street, attract a growing number of young professionals.

“The amazing thing about my experience with the Schapiros is that they treat people equally,” said Zurkovsky. “They treat students as important members of society, and politicians as friends. They don’t hold back.”