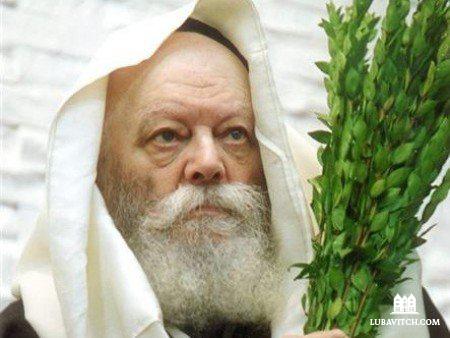 As a shepherd’s searching gaze meets his flock, as he passes every sheep beneath his rod, so do You count and number and regard the soul of every living thing . . . (High Holiday Liturgy, Untaneh Tokef)

Every year, on the holiday of Sukkot, after the Rebbe entered the sukkah at Lubavitch World Headquarters and recited the blessings over his lulav and etrog, he would hand them to an aide to be shared with the community. The Rebbe would then leave the sukkah, and, as hundreds lined up outside, the aide would pass the Rebbe’s lulav and etrog from one person to another, each one taking the opportunity to hold them and recite the blessing. This was how it was for decades.

Sukkot 1991 was different. The crowds were enormous. As always, visitors had come from around the world to share the holidays with the Rebbe. But this time, after the Rebbe made the blessings over his lulav and etrog, he remained standing in the sukkah for the next six and a half hours with no break for a drink or to rest his feet. Well into his ninetieth year, he kept laser-like focus on each individual—there were thousands—who lined up to do the mitzvah on the Rebbe’s lulav and etrog.

Several months later, the Rebbe suffered a stroke. Sukkot 1991 was the last holiday he would celebrate this way together with us, in person.

But these extraordinary hours of connecting with individuals weren’t limited to Sukkot. Earlier that month, prior to Yom Kippur, the Rebbe similarly stood for an extended time, personally giving every one of the many thousands who approached him, a piece of the traditional honey cake  (“lekach”), and a blessing for the New Year.

And a week earlier, prior to Rosh Hashanah, the Rebbe stood for hours near his office in the lobby of the headquarters accepting panim (petitions) from people who came to ask him to pray on their behalf before the New Year. He would take these petitions to the Ohel—the resting place of his predecessor—and keep them before him when he sounded the shofar in shul on Rosh Hashanah.

Not to be forgotten either were the Rebbe’s legendary Sunday dollars. For the better part of the day, every Sunday, the Rebbe stood handing a dollar and a blessing to everyone and anyone who wanted a moment with him. This practice went on for many years, and the lines grew longer with ever more people coming from disparate places and backgrounds.

Surely, this was no way to run an international organization. Surely, the Rebbe could have left his lulav and etrog with his assistant, or had an aide hand out the honey cake and collect the panim. He knew how to delegate when he wanted to. Why did the Rebbe—who carried the weight of the Jewish world on his shoulders—give up days to personally count, as it were, every soul who passed before him?

We can only speculate as to what transpired in those fleeting seconds when the Rebbe locked eyes with the individual standing before him. Something spiritual, to be sure. But I believe that what motivated the Rebbe to stand hour after hour, gazing at each one of us through his holy eyes, was simply the love that he felt for the Jewish people, and the joy that he took in spending time with us.

The month of Tishrei is rich with Jewish holidays—Rosh Hashanah, Yom Kippur, Sukkot, and Simchat Torah. Each of these holidays revolves around its own unique theme, but they all beckon family togetherness, shared celebration and community. This year, with the pandemic still at large, and with many families, friends and communities strained by social and political differences, we will have to work harder to repair our relationships and experience true togetherness.

The Rebbe taught us—during those countless dedicated hours and days—that it is possible to transcend the differences that have been so divisive in recent months. He taught us by example, to focus our eyes on the animating spark of the other and see in each one of us a child of G-d.
To see into the soul of the other, as the Rebbe did so effortlessly, is surely a hallmark of greatness. But it is a skill that we can acquire by practice. And there is no better time to learn this than now, when we prepare to pray for a year of healing and redemption, for blessings of goodness and sweetness. May all of Am Yisrael and all humankind be inscribed for a year of life, of peace, and of prosperity.