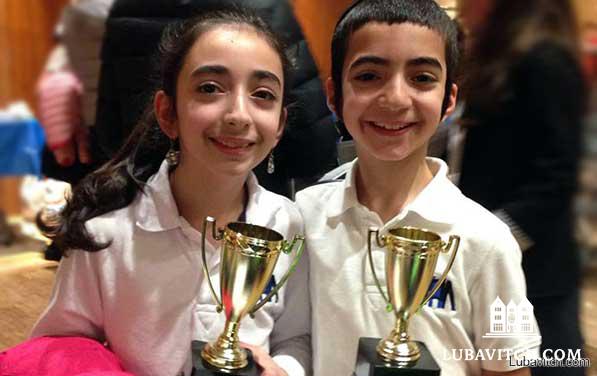 Taking lessons from contemporary life, the children of Chabad-Lubavitch representatives to Downtown Vancouver won top spots in the Public Speaking Contest Award of the Jewish Federation of Greater Vancouver.

The judges rated the speeches based on originality, organization and presentation.

“A man walks into the Rogers Arena for the first time in his life. He has never seen a Hockey player or a Hockey game,” Sarale Bitton, who took the prize for Grade 5, said in her speech.  “He is dressed properly in a nice suit, a tie, and a stylish gray hat. But when he looks around at the fans and at the players, he can’t help but wonder: ‘What are those uniforms? What are those blue shirts? They are not dressy, nor in fashion and in style? They are strange.’”

Sarale delivered her speech last week Thursday at the JCC of Greater Vancouver. A student at the Vancouver Hebrew Academy, Bitton, explained that those in the crowd and players would not be bothered by the weird look on the man’s face. “The players would continue to wear their uniforms proudly, knowing what they represent, and feel sorry for that man’s ignorance.”

Turning to her Jewish message, she said, that we have to be proud about our Jewish dress. Like the Vancouver Canucks ice hockey team, there is the Jewish uniform “just like that man who had no idea what Hockey was, others may not understand the meaning or the value of our Jewish uniforms. But we know what it means.”

Her brother, Mendel, who won second prize in the fourth grade category, spoke about one of the new AppleWatch’s features, which allows the wearer to send a friendly tap or your pulse to another AppleWatch user. “Apparently, there was a time when people just spoke to each other… in 2015 a new era has begun: We are now set to communicate without words or smiley faces – we may now send a ‘friendly tap’ or even our very own heartbeat.”

This, Mendel said, illustrates how we communicate with G-d. “We have the opportunity to wirelessly connect ourselves to Hashem [G-d], and send Him a ‘friendly tap’ or a heartbeat, a feeling coming from the deepest level of our souls,” he told the crowd in his winning speech. “Take a mitzvah, a good deed, whether it is to light the Shabbat candles on Fridays or to affix a mezuza on our door. It is a simple action, beyond words and lengthy emails, which has the ability to communicate with Hashem on the deepest level.”

Sarale and Mendel were among 120 students from three area day schools who competed in the contest. The first prize winner received a $100 Israel Bond; second prize, a $50 gift from the Federation.

Related Articles
View All
The Rabbis’ Kids: A Shared Destiny
The children of Chabad-Lubavitch representatives, ages 8-13, just arriving to Chabad-Lubavitch Headquarters from all around the globe, are nervously getting comfortable in New York’s chilly…
Sweden’s Court Hears Case for Religious Freedom, Again
As Europe marked 70 years since the liberation of Auschwitz, Sweden's Chabad representatives were in court defending their children's right to a Jewish education.
Kids on Campus: The Surprising Power of Chabad Babies
At Hofstra University’s Student Union, Mendel Lieberman is a familiar face. Sorority sisters expect him to be at the table next to theirs. Students stop…
Books: Children Who Live With Purpose
Use the preview site to make sure the text you enter here fits.
Abandoned Children Adopted by Chabad Representatives
When the judge gave the Jewish community of Cordoba, Argentina, ten days to find a home for three abandoned children or they would be given…
Spiritual Children of Chabad Now Reach Out To Others
By now, Bracha Sara Leeds’s degree from UC Berkeley would have paved her way to medical school. But she’s chosen a different road: life as…
Education
I Will Learn It on a Train, I Will Learn It in the Rain
What was once the province of an elite few is now available for free online in every language
Education
Vienna Springs into Action to Take In Ukrainian Students
The Lauder Chabad School in Vienna is going to extreme lengths to accommodate 700 Ukrainian refugee families—free of charge.
Education
110 Schoolchildren Show Off Jewish Knowledge at Championship Game Show
On March 13th, one hundred and ten Jewish schoolchildren marched into a Princeton, New Jersey ballroom for CKids’ annual JewQ International Torah Championship 5782 and…
Education
Tuesdays With Steve
Berger’s pomegranate trees are so verdant that every student picks his own glossy red fruit to bring home each Rosh Hashanah
Get Inspiration to your inbox!
Newsletter
Join our weekly newsletter for inspiration and updates
Donate
Find Your Local Chabad Center
Subscribe
|
Log In
Chabad
About Chabad-Lubavitch
About Chabad Lubavitch
The Rebbe
Headquarters
Magazine
Magazine
News
News & Updates
In The Media
Impact
Social and Humanitarian
Social and Humanitarian
Education
Education
Community
Community