Spiritual Children of Chabad Now Reach Out To Others 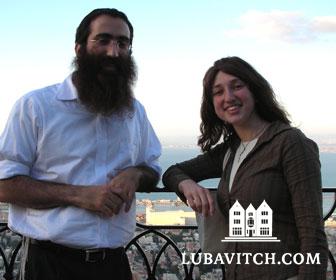 From the moment Chabad-Lubavitch began reaching out to unafilliated Jews, the movement set a pattern that would not only change the lives of those they reach, but also dramatically alter the demographics within Chabad-Lubavitch itself.

By now, Bracha Sara Leeds’s degree from UC Berkeley would have paved her way to medical school. But she’s chosen a different road: life as a Chabad representative on her alma mater’s campus.

Raised in the So Cal bedroom community of Woodland Hills, CA, Leeds isn’t the product of a home steeped in Lubavitch teachings. She didn’t attend a yeshiva. It wasn’t until college that she became involved with Chabad. Yet as of June 11, she and her husband Rabbi Gil Yosef Leeds landed at UC Berkeley as Chabad reps.

The Leeds ought to be an anomaly, but they are not. Out of the crop of 4000 Chabad representatives a guesstimate 10 percent grew up outside of Chabad homes. They chose Chabad leadership life not out of familial tradition but because they are the spiritual children of the Chabad movement. In some countries, like Argentina, the numbers are much higher. Chabad’s senior representative of Argentina, Rabbi Tzvi Grunblatt, told Lubavitch.com that 70% of his fourteen centers are led by couples where at least one spouse was not raised in a Lubavitch home. “Most of our shluchim are homegrown,” he said.

Alumni of Barnard, Stanford, and other prestigious universities form a plurality among this category of Chabad leaders. Before Gil Yosef Leeds earned his rabbinical degree, he was on his way to a degree in psychology from UC Berkeley, which tied with Princeton in U.S. News and World Report’s 2006 ranking of universities nationwide. For Rabbi Leeds, college was the gateway to his calling.

“In Berkeley, there’s no kosher meal plan and Shabbos was tough to keep, so it was either sink or swim,” he said. Stuck for a place to live while at school, Rabbi Leeds rented an apartment at the Berkeley Chabad. Having attended preschool at Chabad of Tarzana, CA, Chabad’s Camp Gan Israel, and Jewish day schools, he was familiar with Chabad.  But his closeness with Chabad of Berkeley’s Rabbi Yehuda and Miriam Chaya Ferris had him realign his career goals.

Opting in to life as Chabad Shluchim means opting out of a life of affluence, the nice house, new cars and vacations. Parents ask: “Do you think $100 bills land on your doorstep?” They alternately marvel at their children’s prowess as teachers, leaders, crisis counselors, and worry about the stress they endure.

It took time for Rabbi Leeds’s father Steve to adjust to his son’s decision. “I thought he wanted to be a doctor or a lawyer, and I wanted to know from him what happened to his original intentions,” he said, “but I was inspired by his and Bracha’s commitment together to this mission and the vision that they have for creating the possibility of an enriched Jewish life in Berkeley.”

For Perel Hodakov, her decision to seek a position as a Chabad representative was an act of coming full circle. Though she grew up in a modern orthodox home, her father’s extended family members are lifelong Lubavitchers, as was her grandfather. “I always liked these relatives. I was always in awe of the ones who lived in South Africa and Australia. They were always alive with purpose,” said Hodakov, now co-director of Chabad of Westville, CT.  Admiration of Chabad representatives themselves, more than inventive programming or, initially, than intellectual forays in Chasidic philosophy, appears to be the deciding factor for taking the road to Chabad leadership.

Hodakov’s own experiences broaden the common ground between her and the community she serves. Aviva Andrusier of Chabad of Columbus, OH, agrees. She feels comfortable with Jews on a spiritual journey having lived through her parents’ transition from proud but non-observant Jews to involved Chabad devotees. “I understand them, because I saw all the stages,” she said.

Aside from empathy, becoming a Chabad leader from a non-Chasidic background has its practical advantages. In the Leedses’ search for an apartment near UC Berkeley, they already knew which side of campus would be most convenient for students to reach. In addition, the Leeds still have access to their UC Berkeley email addresses, raising the comfort quotient with UC students from day one.

On the other hand, not growing up Lubavitch comes with its challenges. “I wasn’t raised in a family where we hosted dozens of people every Shabbos,” said Hodakov.

Even considering the lack of family network and Chabad House know-how, Rabbi Grunblatt said that in his experience, a representative’s background plays less of a role in his or her success than commitment.

“What counts more is spirit and humility,” he said.

Related Articles
View All
Campus
Jeff Brought Chabad to Guelph, Now It Carries His Name
This July, on Jeff’s yahrzeit, the Dr. Jeff & Lisa White Chabad of Guelph was dedicated in his honor
Campus
Students Surprise Refugees with Busload of Food
Students touring Poland with Chabad on Campus responded to an unexpected chance to assist Ukrainian refugees
Campus
On Board With COCI
"I wanted to create an environment so that the communal Jewish world would see Chabad for the powerhouse that it is, in terms of its…
Campus
Wounded Warriors Bring Jewish Pride To Campus
COCI has been bringing wounded Israeli soldiers to college campuses in the US to help boost Jewish pride among students
Get Inspiration to your inbox!
Newsletter
Join our weekly newsletter for inspiration and updates
Donate
Find Your Local Chabad Center
Subscribe
|
Log In
Chabad
About Chabad-Lubavitch
About Chabad Lubavitch
The Rebbe
Headquarters
Magazine
Magazine
News
News & Updates
In The Media
Impact
Social and Humanitarian
Social and Humanitarian
Education
Education
Community
Community