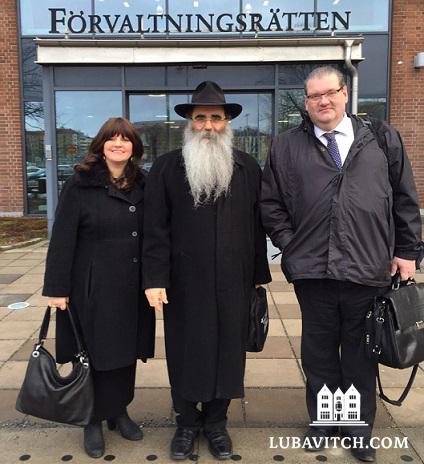 As Europe marked 70 years since the liberation of Auschwitz, Sweden’s Chabad representatives were in court defending their children’s right to a Jewish education. Challenging them were Gothenburg’s Majorna-Linné’s education council representatives, compelled, they said, by “the principle” of the matter: The Namdar children ought to be educated in the same schools and the same manner as most of Sweden’s children are.

But, as Rabbi Alexander and Leah Namdar illustrated in Tuesday’s court hearing, larger principles are at stake in this case: “Is this a country that has the courage to protect its citizens and stand up for religious freedom?” The law, argued their attorney, Mr. Ulf Tollhage of the Nordia law firm, must concern itself with protecting the physical and spiritual freedoms of citizens. As such, it ought not only to allow, but to support, the homeschooling of their children.

Tuesday’s session was round four for the parents of 11 who have been challenged in the courts since 2011 for homeschooling their children. The Namdars have dedicated their careers to nurturing a Jewish community in Gothenburg since settling here in 1991, while providing their children with an immersive Jewish and progressive general studies homeschooling program.

“This was not the Namdar family on trial, but Sweden on trial,” said Leah Namdar in a conversation with lubavitch.com after the hearing. Many in Sweden, she reflects, are so uncomfortable with religion that they have “thrown the baby out with the bathwater” leaving society with no consciousness of “an Eye that sees and an Ear that hears.”

Speaking passionately about her great grandparents, some who survived the Holocaust and others who were murdered by the Nazis, she told the court, “We have to learn from history and bring awareness of G-d into the country, where people live meaningful lives and recognize that every life is precious for having been created by G-d. This is what will make the world a better place where people can live in harmony together, with their differences.”

What then does, asked Mrs. Namdar?

Seven-year old Levi, said his father, Rabbi Namdar, wears a kippah on his head, and tzitzit—the ritual fringes that are worn by Jewish males, as a reminder of the Torah’s commandments. By his dress alone, he is visibly Jewish, and “Sweden’s schools have no plans for how to to protect our children, nor for how to meet their religious educational needs,” which the law requires that they provide.

Leah explained that the Jewish education which they are providing their children teaches them compassion, respect for the other, and a passion for a life of sharing and kindness. “Visiting the elderly and helping the needy, valuing every human life and respecting the divinity of each human being . . . these are the ways G-d is reflected in the education we give our children. A healthy society is based on an awareness of G-d, relevant to every person whether or not he or she associates with a particular religion.”

The court, which will issue its decision in a few weeks, noted that it received hundreds of letters from Jewish and non-Jewish leaders and activists around the world in support of the Namdar’s right to homeschool. Grateful for the outpouring of support from a wide base of people and activists who share their passion for this cause, the Namdars anticipate a favorable outcome.

“Sweden has distinguished itself for offering refuge to thousands of Holocaust survivors. This kindness has never been forgotten,” observed Leah. “I hope that now the court appreciates the historical significance of this case and what it represents for religious freedom.”

To help support the cause of religious freedom in Sweden, click here.

Related Articles
View All
Freedom of Religious Education: On Trial in Sweden
Early next month a young Jewish couple will travel from their home in Gothenburg to Sweden’s Supreme Court in Stockholm, where they will stand before…
School Case Is Heard in Sweden’s Supreme Court
Emerging from Stockholm’s National Court, Rabbi and Mrs. Alexander Namdar reported to Lubavitch.com that the court will issue a decision on December 2 regarding Jewish…
Get Inspiration to your inbox!
Newsletter
Join our weekly newsletter for inspiration and updates
Donate
Find Your Local Chabad Center
Subscribe
|
Log In
Chabad
About Chabad-Lubavitch
About Chabad Lubavitch
The Rebbe
Headquarters
Magazine
Magazine
News
News & Updates
In The Media
Impact
Social and Humanitarian
Social and Humanitarian
Education
Education
Community
Community