Kids on Campus: The Surprising Power of Chabad Babies 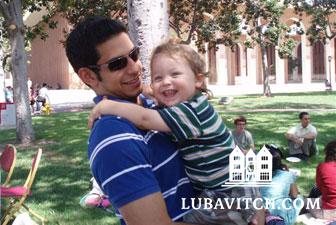 At Hofstra University’s Student Union, Mendel Lieberman is a familiar face. Sorority sisters expect him to be at the table next to theirs. Students stop to beam at him on their way to the ATM. During Shabbat dinner, he always greets them by name – even if the guest list tops twenty. Typical of Chabad on campus, yes, but Mendel is only two.

Children are typically viewed as a category all its own. There are “just for kids” cable networks. Children’s wear franchises, ketchup friendly children’s menus, gummy bear vitamins for kids, all keep with the notion that the youngest among us must be kept separate from the guys and gals in the big shoes.

A glance at photo albums kept by Chabad centers on college campuses, numbering well over the century mark, tells a very different story.

Cuddled in the arms of a grad student or piggybacking astride a sweatshirt-clad communications major, the children of Chabad representatives show up in shot after shot.

More than cute camera magnets, kids are right in the mix of Chabad activities. Even before their first “ga-ga,” these charmers are essential partners in their parents’ activities.

To be known by the Chabad representatives’ children is a taste of home, a soothing helping of belonging.

Part of the charm, says Rabbi Zalman Teitelbaum, whose Chabad center serves students at Albert Einstein School of Medicine in New York City, “is they are not responsible for the kids, and the kids know that we’re there and its okay to be friendly.”

“In a comfortable context people just love kids, especially people far from home, who are studying so much.”

Out of the corner of her eye, Rochelle Sherman, a University of California Santa Barbara graduate, would observe the children of the Chabad representatives Rabbi Mendel and Rochel Loschak. They knew how to perform the rituals, like washing hands before eating Shabbat challah. To Rochelle, the kids were non-threatening, fun to watch “teachers by example.”

Not for the absence of babysitters or for simple lack of private space do Chabad representatives on campus keep their children close by during student activities.

The Lubavitcher Rebbe, Rabbi Menachem M. Schneerson, of righteous memory, advocated that every Jew, young and old, play a role in illuminating the world with acts of goodness and kindness. While their fathers and mothers expend tremendous amounts of energy to create an atmosphere that nourishes Jewish continuity, the kids at campus Chabad centers provide some of the best arguments against assimilation.

When Cambridge University students were interviewed about the reasons they enjoyed the Chabad center on campus, “they all brought up the family element,” said Rabbi Reuven Leigh.

He was rather surprised by the finding. Children are foreign beings to most students he encounters. As only children or from families with two siblings at most, the students rarely had a chance to interact with little kids, let alone with four children under the age of four.

“They are fascinated by our lifestyle. They see we are happy,” said Rabbi Leigh, “it encourages people to look at children as a positive choice.”

Over their four years in college, plus several more when graduate studies are tacked on, students watch Chabad campus kids grow up. At USC, when Rabbi Dov and Runya Wagner’s son, Menachem, turned five, inviting students to the birthday BBQ was a given. Students attend brit milah ceremonies, third birthday upsherin haircuts, and, in long-running campus centers, bar and bat mitzvahs and weddings.

“Your home away from home,” a common Chabad on campus slogan, rings especially true with children in the picture.

Related Articles
View All
Campus
Wounded Warriors Bring Jewish Pride To Campus
COCI has been bringing wounded Israeli soldiers to college campuses in the US to help boost Jewish pride among students
Campus
A Bridge Built In Buffalo
Fifty years of Chabad at SUNY Buffalo
Campus
Miniature “Pegisha” Draws Four Hundred To Brooklyn
A scaled-back version of an annual Shabbat retreat to Brooklyn leaves a deep impression on four hundred college students
Campus
A Place At The Table
Four students share why they choose to claim their place at the table
Get Inspiration to your inbox!
Newsletter
Join our weekly newsletter for inspiration and updates
Donate
Find Your Local Chabad Center
Subscribe
|
Log In
Chabad
About Chabad-Lubavitch
About Chabad Lubavitch
The Rebbe
Headquarters
Magazine
Magazine
News
News & Updates
In The Media
Impact
Social and Humanitarian
Social and Humanitarian
Education
Education
Community
Community