The Rabbis’ Kids: A Shared Destiny 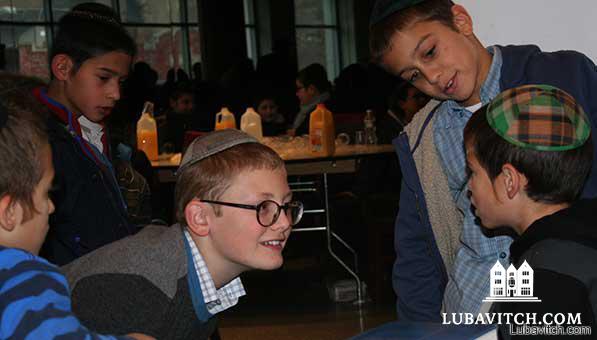 The children of Chabad-Lubavitch representatives, ages 8-13, just arriving to Chabad-Lubavitch Headquarters from all around the globe, are nervously getting comfortable in New York’s chilly November weather. Some 750 children come from different countries—more than 80 countries in all—and speak different languages, but they have more than enough in common.

The Kinus Tzeirei Hashluchim, the conference for children of Chabad-Lubavitch emissaries, taking place simultaneously as the International Conference of Chabad-Lubavitch Emissaries, gives the children a rare opportunity: to socialize with peers who are being raised and groomed by Shluchim, often acting as junior representatives in their communities where they are sometimes the only Jewishly observant children.

“I want to see my friends from school,” says Mendel Wilhelm, 8, from Oslo, who learns in the Shluchim Online School, where kids from the same time-zone study virtually together. “We see each other and learn together, but we do not get to talk freely, only when we meet each other face to face.”

The young Wilhelm’s father, Rabbi Shaul, was a part of a group of teens that organized the very first mini conference 20 years ago. The younger Wilhelm goes from friend to friend, bantering and doing normal kids stuff.

“There are kids in Oslo my age, but they are not necessarily interested in the same things as I am. Here I am open to speak openly about my shlichus [mission] in Oslo, my going with my father to visit Jews and do mitzvahs with other Jews in my hometown.”

Sporting blue sneakers and a black coat, he runs off with a friend, Levi Simon, 10, whose parents are Chabad representatives in the Golders Green neighborhood in London. Simon found another one of their friends and he wants his friend from Oslo to meet him.

These young kids are not shy, finding themselves often in the spotlight back at home. They are the rabbi and rebbetzin’s son. “It’s not always fun being in the spotlight. Sometimes it is hard and sometimes it’s fun being the son of Shluchim,” Yossi Sherman, 11, from Merion Station, Pennsylvania, where his parents head Chabad of the Main Line. “I like coming here to meet people who have similar lives to mine. Sometimes they come from countries that I never even heard of.”

For Moshe Pinson, director of the mini conference, under the auspices of the Shluchim Office, these kids feel a lot of pressure during the year, more than other children in their community.

“Here they come and meet children who share their struggles. This gives them a sense of mission, pride that they are part of a greater picture,” he says, as he answers calls from a worried parent, whose kid is at the convention for the first time. He calms the father and tells him that he is good hands and will have a great time.

The conference, Pinson tells lubavitch.com, gives children “the chance to rejoice in their shared mission with their parents.”

Walking around the main ballroom at the Jewish Children’s Museum, children are talking a mix of languages: French, Russian, Hebrew, English and Spanish, and others I could not identify.

Yisroel Levin, 12, from Palo Alto, California and Shmully Marozov, 11, of Cleveland, Ohio, are chatting in one corner like old friends. Chaim Madvig, 8, from Oswego, New York, is listening in, leaning back on comfortably on his chair. Levin tells me that they all just met each other. They couldn’t understand why I was surprised that they looked so comfortable speaking to each other like old friends.

“My father told me that we need to keep warm here,” I overhear an Israeli kid tell his friend, who identified himself as being the son of Chabad representatives’ in a small Israeli town in Southern Israel. “I come here every year to get [spiritually] warm and here it is cold,” he grins.

Related Articles
View All
Chabad Launches the First Online International School For Jewish Children
Eyes glued to the screen, seven-year-old Devorah S. of Ithaca, NY, listens intently to her teacher’s voice through her headset. Devorah has 15 classmates whom…
Hi Resolution: Annual Photo Captures Thousands of Faces
For some photographers, thousands of rabbis standing around the red ‘no standing’ sign outside Lubavitch World Headquarters are a dream; for others, a nightmare.
At Chabad Conference, Knesset Speaker Yuli Edelstein Won’t Talk Politics
It doesn’t take much to get Yuli Edelstein, the speaker of the Israeli Knesset, to reminisce about the times he spent with members of the…
The Greenbergs 17: A Leader in Every Time Zone
(lubavitch.com) Some call it “fate,” but the Greenbergs prefer “mission.” The children of Rabbi Moshe and Devorah Greenberg—there are seventeen in all—are dispersed around the…
Get Inspiration to your inbox!
Newsletter
Join our weekly newsletter for inspiration and updates
Donate
Find Your Local Chabad Center
Subscribe
|
Log In
Chabad
About Chabad-Lubavitch
About Chabad Lubavitch
The Rebbe
Headquarters
Magazine
Magazine
News
News & Updates
In The Media
Impact
Social and Humanitarian
Social and Humanitarian
Education
Education
Community
Community