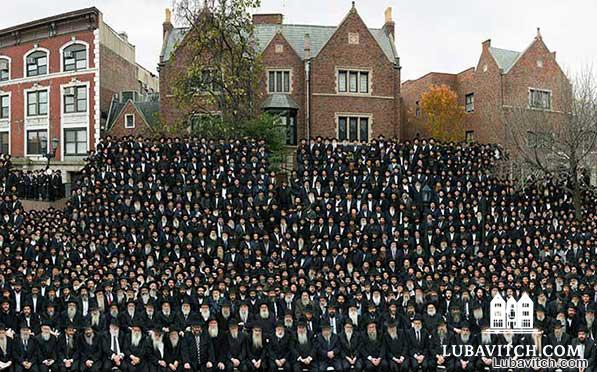 Detail from the 2013 group picture (photo: Chaim Perl/Kinus.com). Below: Chaim Perl during the photo shoot (photo: B. Lifshitz).

For some photographers, thousands of rabbis standing around the red ‘no standing’ sign outside Lubavitch World Headquarters represent a dream; for others, a nightmare. Getting every face into the frame is quite the challenge for the official photographers. If years of experience have taught them, it’s also made the challenge greater: with each passing year, the number of shluchim grows.

Setting up and getting the rabbis—representing some 87 countries—together for the annual “group” photo outside Lubavitch World Headquarters, in itself a scene worthy of a photo essay, brings many photographers back year after year. The 2014 conference begins Wednesday afternoon and continues through Monday morning.

Rabbi Eliezer Zalmanov, Chabad representative to Munster, Indiana, feels that the photos session is one of the highlights of the five-day conference. “Sure, the entire weekend is spent in the company of thousands of my colleagues from across the globe, but there is something extremely special about everyone posing together.” 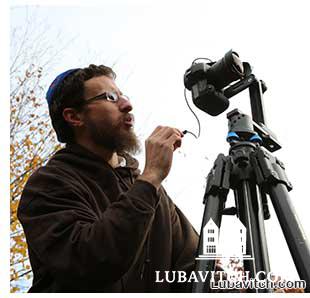 The group photo was a part of the first conference in 1983. Back then it was only a national conference and a paltry 60 rabbis participated.

“It was a simple feat, everyone jumped up on one of the bleachers inside Lubavitch World Headquarters, the photographer said, ‘squeeze in’ and gegeingen, that was it,” says Rabbi Lipa Brennan, one of the convention organizers.

Today, pulling several thousand people together for a photo session is a logistical exploit. The multi-tasking, hi-energy rabbis are not a docile group and getting them comply for a sitting (or standing) is quite a maneuver. One is busy catching up on his daily study routine, another is comparing notes with a colleague and another is on an urgent call with a community member thousands of miles away. Multiply that hundreds of times over.

If that isn’t enough, the photographer must then manage to get each of the thousands of faces in focus, in one frame. “If someone would ask us to shoot 2,000 people, we’d probably think it’s a prank,” photographer Noam Galai said. But it’s exactly what the official photographer Chaim Perl and fourteen others set out to do.

Perl has figured a way around some of the difficulties. “There are two great challenges, one is the rabbis are in the shade and the sun is facing the lens. I therefore study the sun and its positions to know exactly the best time to take the photo. The second is to get thousands of people to look into the camera at the same time.”

Some of the shluchim find the photo session inspires reflection: “I comprehend that I am just one small nail in a much greater picture. Every year when there are so many more Chabad emissaries in the photo—and by today I cannot even see everyone in the photo—I become emotional,” Rabbi Levi Mondshine, Chabad representative to Smolensk, Russia, says. “This is the time of the convention that strengthens me most.”

As the bleachers set up outside are almost full, Rabbi Moshe Kotlarsky, the Vice Chairman of the educational arm of the Chabad-Lubavitch movement, takes the time to review the day’s schedule with the shluchim.

“Each individual here represents a unique Jewish community in a country, a city or town. The entire world is represented here, in one place.” There is nothing, he says, that needs to be added. A picture is indeed worth a thousand words.

Year after year, mainstream media outlets cover the group picture at the convention. In 2012, The Daily Mail wrote, “Now that’s a lot of rabbis! Incredible images as 3,000 rabbis from all over the world come together on Eastern Parkway.”

As the photo session comes to an end, the shluchim erupt in song. Some do a dance. Then the crowd disperses.

Related Articles
View All
At Chabad Conference, Knesset Speaker Yuli Edelstein Won’t Talk Politics
It doesn’t take much to get Yuli Edelstein, the speaker of the Israeli Knesset, to reminisce about the times he spent with members of the…
Shluchim Conference: A Time for Taking Stock
A Chasidic quip attributed to Rabbi Schneur Zalman of Liadi says, “Your neighbor’s material wellbeing is the stuff of your spiritual wellbeing.” This idea, delivered…
International Conference of Shluchim Convenes
They are angels in black coats for the downtrodden and broken. Doctors treating the ills of faded Jewish values. PR men, ice cream scoopers, school…
Hometown Heroes: Thousands of Chabad Rabbis Return to Lubavitch Headquarters
The 25th annual International Conference of Shluchim,
Headquarters
Court Confirms Chabad’s Exclusive Rights To Flagship Synagogue At 770 Eastern Parkway
“Chabad-Lubavitch World Headquarters is gratified by the decision handed down last week by the Civil Court of the City of New York, confirming exclusive rights…
Headquarters
Statement By Chabad Lubavitch World Headquarters
Every day that Jews are barred from entering the synagogue by armed guards is an unforgivable violation of the Jewish people!
Headquarters
Celebrating Radical Change With Chabad-Lubavitch
The banquet dinner, an elaborate, dramatic affair, is in itself no small nod to the challenge of radical transformation:
Headquarters
Bradenton, FL: Chabad Purchases Five Acres as Jewish Life Grows
Bradenton’s Jewish community will finally enjoy a permanent address and a new, comprehensive facility that will allow it to grow and enjoy greater programming and…
Get Inspiration to your inbox!
Newsletter
Join our weekly newsletter for inspiration and updates
Donate
Find Your Local Chabad Center
Subscribe
|
Log In
Chabad
About Chabad-Lubavitch
About Chabad Lubavitch
The Rebbe
Headquarters
Magazine
Magazine
News
News & Updates
In The Media
Impact
Social and Humanitarian
Social and Humanitarian
Education
Education
Community
Community