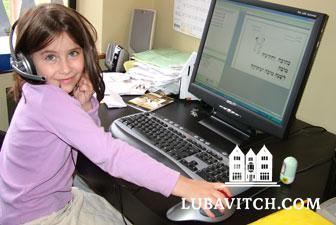 Esther Levertov 6, of Santa Fe, NM, at the Online School for Young Shluchim. Click on image to see more photos.

Chabad Shluchim living in remote places or cities where there is no Jewish school, have long contended with schooling their children at home or parting with them at young ages, so they can get a traditional education. A newly developed online school now gives these children the benefit of a classroom situation where they daily interact with classmates–children of other shluchim, and a teacher, at home.

Eyes glued to the screen, seven-year-old Devorah S. of Ithaca, NY, listens intently to her teacher’s voice through her headset. Devorah has 15 classmates whom she met only "virtually," and a teacher who lives 300 miles away from her. One of 150 students from around the world who participate in an online classroom, Devorah says she loves “learning Yiddish,” her favorite subject. The two-hour class in front of a computer screen flies by. “It doesn’t seem like two whole hours.”

The Online School for Young Shluchim was established by the Shluchim Office a division of Merkos L'Inyonei Chinuch, the Chabad-Lubavitch educational arm. Founded by the late Mendel Shemtov, the Online School provides Jewish children with a comprehensive Jewish education and the opportunity to meet and socialize with other children of similar background. Designed specifically for the children of Chabad Shluchim who often live in cities and countries where there are no local religious Jewish schools, the School’s classes range from first through eighth grade. Scheduled to accommodate different time zones and three languages–English, Yiddish (a spoken language among many children of Shluchim) and Hebrew, the School’s goal is to equip the students with the necessary education and skills to eventually integrate into a regular Jewish high school curriculum.

Every day at a set time, Devorah and her classmates at the Online School enter a password and plug in their camera equipped headsets to access their online classroom. The screen acts as a classroom and the students are able to listen, interact and ask questions through their headset. Instead of raising their hands, they merely click the control button on their key board requesting to be called on, or simply type in their questions. Through their cameras they can actually view their teacher and fellow classmates. The teacher can even call students up to the board to demonstrate their skills. During recess, the students enjoy open microphones and are able to interact freely with each other.

Mendel Levertov, age 10, of Santa Fe, spends four hours a day at the Online School for Young Shluchim. "He's learning Code of Jewish Law, Talmud, Torah, Chasidut, Navi and Parsha over the course of a week," says his father, Rabbi Berel Levertov, Chabad representative to Santa Fe. "This is an incredibly innovative program that has allowed me to keep my children at home while giving them the quality of education they would receive at a proper yeshiva or traditional Jewish day school," says Levertov, who has four out of five children enrolled in the Online School.

Long distance education is not a new phenomenon. Other correspondence courses for home schooled students include communication through postal mail, radio broadcasts, videos, CD’S, email and most recently, web cameras. These courses are geared towards a specific subject. The students simply access an online curriculum and are guided by an instructor. But the Online School is the only long distance education system that actually simulates real classroom dynamics. Mrs. Gittel Rosenfeld, the Online School Principal, says she feels that the online environment does not lessen the effectiveness of the teacher. "To the contrary, the students get to interact and learn through visual stimulus without the distractions of a normal classroom.”

Until virtual spit balls are invented, teachers at the Online School also enjoy the benefits of the unique and innovative system that eliminates losing time on discipline. When the classroom gets to noisy or out of control, the teacher can simply switch off the student’s microphones. “You can build positive relationships with the students when you are not forced to discipline,” says Chanie Barber, second grade teacher at the Online School. Though the class is only two hours a day, the students seem to pack more learning into less time.

There are a few minor glitches to be ironed out, with students sometimes as young as five and six years old getting stuck on technicalities, headsets and microphones. Getting kicked off the server can sometimes mean that the student will miss 10- 15 minutes of the two hour class until they get readmitted. The teachers too have to get used to the new environment. Devorah says that sometimes she feels the class is going too fast for her, but she does not know how to communicate that message. Without the teachers in close proximity, it is difficult for them to gauge the reactions of their students and evaluate the pace at which they understand the information. But students and parents say it is an amazing development.

"My children now have the benefit of being schooled by trained teachers, with the supervision of a principal and the social environment they would get at school. My children now are on the phone and internet with their classmates, and this has opened a whole new dimension in their experience as young Shluchim," says Mrs. Devorah Leah Levertov.

Less than a year old, this seems to be a rapidly growing form of schooling. The school started with four students who interacted over the telephone on a conference call.  By September, the school had swelled to 150 kids and the online classes opened for the first time. The web cameras were introduced a short while later, and the students can now actually see their teachers and classmates. According to administrators of the Online School, they are anticipating opening up classes to students in Australia and Asia. There are no immediate plans for classes in Spanish or other languages, but should there be a demand for that, says Chana Raizel Segal, the school administrator. “we’ll do our best to fill it.”

The students, teachers and administrators are excited about the progress they have made and the opportunities that lie ahead. Do the kids miss being in a regular school? “This is a real school!” Devorah insists.