Town with “No Jews” Gets Its Own Jewish Center 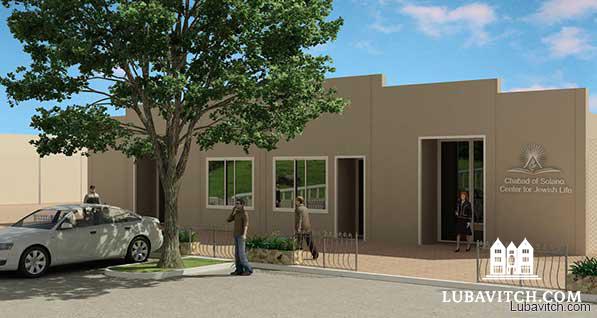 A rendering of the future location of Chabad of Solano County.

Back in 1850, Solano County’s Indian Chief didn’t bargain for a Chabad Center, but chances are he’d be a proud man today knowing that one of California’s first counties named for him, has closed on a new property—the first Jewish building of its kind in the county, and one that promises to be a game-changer for the Jews of this area.

The 8,500 square foot complex, to be named the “Chabad of Solano Center for Jewish Life” is the result of local enthusiasm so dynamic, it sealed the deal in all of four months. “Miraculous,” says Rabbi Chaim Zaklos about a project that could have easily taken ten years to complete.

“The area’s Jews expressed tremendous interest and excitement in expanding and deepening their Jewish experience through a permanent Jewish center,” said Chabad representative, Rabbi Zaklos, and several of them, passionate about having their own Jewish community center, launched the building campaign and worked diligently to make it happen.

Until now, the northern Solano County Vacaville-Fairfield area had no synagogue or community center of any kind to call own. “With G-d’s help,” says an elated rabbi, “we’re hoping to surpass the community’s wildest expectations by creating a beautiful place that will benefit Jewish life in every way.”

Located in northern California midway between Sacramento and the Bay area, the area has seen many Jewish groups come and go attempting to establish a local Jewish presence there. When Rabbi Chaim and Aidel Zaklos arrived in 2009, things finally began to change.

The county is on the periphery of the areas served by Jewish Federations in the state capitol and in the Bay Area, and when Zaklos inquired he was told that there were simply no Jews in Solano. After briefly visiting various towns in the county he learned there were indeed Jews who lived there, albeit with no connection to Jewish life and to each other.

When the Zakloses arrived, many of the Jews they met told them they were the only ones. With no local Federation or Jewish organization to take a census, Zaklos is unsure of the total Jewish population size in the area, but in the five years since living here, he and his wife have confirmed at least 500 Jewish households in a 40 mile radius.

Based in Vacaville, the Chabad representatives soon attracted 40 men and women to their  Torah classes; 30 now join weekly Shabbat services, youth programming through their popular Hebrew school and summer camp, and holiday events draw hundreds from even outside the county lines.

Steve Sillen comes from a traditionally Orthodox community in New York City and found himself having to drive a distance of 30 miles to find anything remotely Jewish.  “There was nothing here before Chabad came to town,” says Sillen, who has since enjoyed watching the local Jewish community blossom. He and his wife attend classes with the rabbi and participate in various services and programs, but their greatest joy, they say, is seeing their grandson attend Chabad’s Hebrew school and summer camp.

When the ideal building—a large multi-purpose center that was already zoned for religious use, centrally situated on Main St, in the heart of town—went on the market, the community pulled together the necessary down payment with over 200 donors contributing to an online matching campaign. And a handful of major donors from around Solano County stepped up to support the project. Solano County residents, noted Zaklos, are largely middle income with limited resources, making their participation all the more impressive.

Chabad is now looking to raise another $275,000 to upgrade and furnish the building which includes a synagogue. Renovations to the center will also include a kosher kitchen for meat and dairy, a kosher supermarket and café as a source for all kosher needs, a large dining hall and lounge for social events, a conference room, library, and classrooms for educational purposes, for both children and adults, and offices.  Plans also include an indoor playground and the first Jewish Children’s Museum in Northern California.

A proud founding donor of the new 15-room center, the largest of all Chabad centers in Northern California, Sillen says that “The center will allow our community to grow exponentially in a physical and spiritual sense. Everybody in the community is very excited as it gives us a second place to call home.”

Related Articles
View All
The Hidden Jews of Solano County
(lubavitch.com) It’s an 820 square mile swath in Northern California with a population of about 500,000. Until recently, anyone living there who happened to be…
Arizona’s Mountain Range Jewish Community on the Rise
With views overlooking the San Francisco Peaks, the future home of Chabad of Flagstaff will sit on a central road, close to Northern Arizona University—the…
New Chabad Ottawa Torah Center Takes City Builder Award
The Chabad representatives serving the Barrhaven suburb of Canada’s capital took many community-building steps before crowning it with a $4.5 million edifice that garnered the…
Chabad Opens Lehrhaus at Cambridge University
Cambridge, England, home to one of the world’s oldest and most prestigious universities, has for centuries provided students with access to some of the best…
Cyprus Chabad Dedicates Fourth Location in Limassol
Chabad of Cyprus dedicated a forth location in the country, this one in Limassol. The city sits on the southern coast of Cyprus, is the…
Features
Coming Back From Cancellation
The notorious practice of “cancellation” suggests that our society has forgotten how to forgive, and how to make amends. What is the Jewish perspective? Here…
Features
Remembering Rebbetzin Chana: Jewish Feminine Role Model
A feminine role model of Jewish activism and proponent of Jewish scholarship, is being remembered today, on her yahrzeit.
Features
Grateful or Entitled?
I am concerned about what kind of people are we raising, and I want to reverse this shift in our family that is making our…
Features
Howard Glowinsky: Letter To My Children
Individuals who have come to Torah study as adults reflect upon something that they have learned
Get Inspiration to your inbox!
Newsletter
Join our weekly newsletter for inspiration and updates
Donate
Find Your Local Chabad Center
Subscribe
|
Log In
Chabad
About Chabad-Lubavitch
About Chabad Lubavitch
The Rebbe
Headquarters
Magazine
Magazine
News
News & Updates
In The Media
Impact
Social and Humanitarian
Social and Humanitarian
Education
Education
Community
Community