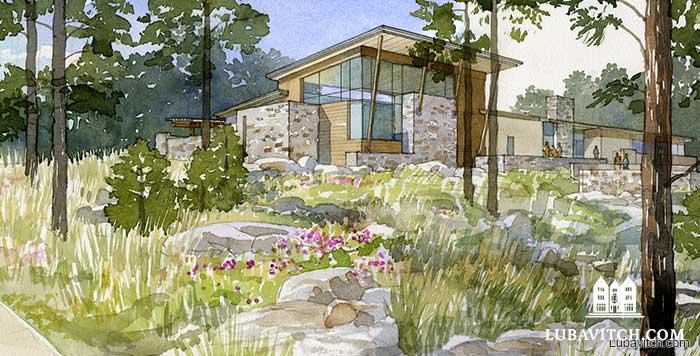 A rendering of the future Chabad of Flagstaff and the Rohr Chabad Jewish Student Center.
Photo Credit: Overland Partners

“Who would have thought that we would see this type of growth? This is [all] part of the miracle—to have our own building,” Burt Gershalter, a local psychologist living in Flagstaff, says incredulously.

With views overlooking the San Francisco Peaks, the future home of Chabad of Flagstaff will sit on a central road, close to Northern Arizona University (NAU)—the perfect location to answer the needs of the city’s Jewish community.

Not far from the Grand Canyon, Flagstaff is a destination for many world Jewish travelers. The city (population 55,000) counts some 500 Jewish households and about 500 Jewish students at NAU. Israelis, Europeans and out-of-state visitors make for an eclectic, diverse mix of Jews.

Flagstaff’s mild summer weather, the lowest for Arizona, has made it a hot spot for Arizonians living in places like Tucson and Phoenix. For these second home owners coming for summer weekends or prolonged vacations, Chabad provides them a connection to all things Jewish.

Rabbi Dovie and Chaya Shapiro are Chabad representatives here since 2006. “This is a welcoming community,” says the rabbi. In the eight years they’ve been here, the community has grown enough to inspire the dream for its own center.

Dr. Al Silberman from Tempe, Arizona, has been traveling to his summer home in Flagstaff for over forty years. Meeting Chabad four years ago has given him more to look forward to when coming for the summer.

“During the summer I have more time to engage in Jewish activities,” he said. “For all the years I was there, there was nothing really Jewish up there. At times we traveled forty miles to go to synagogue. When we went to check out the Chabad, they were very welcoming, kind and open to us.”

Gershalter describes Chabad’s appeal: “[At Chabad] you are loved first and then you get drawn into study, to learn more.” Most compelling, he says, is that Chabad offers you “the opportunity to learn whatever you want to learn, learn about the holidays, learn about the Torah.”

When the couple arrived eight years ago with their six-month-old child, the community sat in trepidation at the prospects of failure. Instead, activities and participation grew, and an active center for Jewish students, locals, visitors soon emerged. Now, they are busting out of the 3,000 sq foot space.

“Chabad of Flagstaff really needs a new center, a synagogue, for our young people to come together and have a place that they could actually call home,” says local philanthropist Carmen Blank, who was honored with the Generosity Award at Chabad’s dinner in August.

Plans took root with the purchase of 2.2 acres of land through a grant from the Rohr Foundation. The new building which will include a synagogue, social hall, commercial kitchen, library, Mikvah and classrooms, will also house the Rohr Chabad Jewish Student Center at NAU.

The award-winning Overland Partners architects designed the new building with an open plan to reflect the “hospitality, the energy and spiritual enrichment” of the center. “We really want to try to embody that warmth and openness and energy into the project,” Jim Shelton, a designer for Overland Partners, said.

Related Articles
View All
Chabad of Arizona Reaches Out . . . To Everyone
(lubavitch.com/LNS) Hotel rooms in Glendale, AZ, have been booked for months. Superbowl madness is running high in the Arizona town that’s home to the big…
A New Building for Chabad in Tokyo
(lubavitch.com/LNS) Chabad-Lubavitch of Japan announced a happy end to its long search for a new building. “After years of looking, we found a beautiful 400…
New Chabad Ottawa Torah Center Takes City Builder Award
The Chabad representatives serving the Barrhaven suburb of Canada’s capital took many community-building steps before crowning it with a $4.5 million edifice that garnered the…
New Home for Peabody Chabad in the New Year
Chabad of Peabody, Massachusetts, bursting at the seams of its current location, will begin the Jewish New Year with the purchase of a new building.
Chabad at WVU Opens New Space on Campus
Location, location, location. For Chabad of Morgantown, West Virginia, that was at the top of their wish list in their search for a new home.
Built on Inclusiveness, New Center Shapes Aspen’s Jewish Community
The $18 million building was at least a decade in the making. Now complete, the Mintzs say this is only a beginning. “We have to…
Chabad Dedicates Opening of New Building in Buenos Aires’s Soho
Make sure the length of this blurb stays above the black line below.
Campus
A Place At The Table
Friday Night @Chabad on Campus
Campus
Kugel for Culinary Students?!
New Shluchim to the Culinary Institute of America and Marist College
Campus
Torah Learning for College Students, Redefined
New JewishU program offers high-quality Torah courses
Campus
Jewish Pride on the Field
Chabad at UCF Celebrates Students’ Soccer Victory
Get Inspiration to your inbox!
Newsletter
Join our weekly newsletter for inspiration and updates
Donate
Find Your Local Chabad Center
Subscribe
|
Log In
Chabad
About Chabad-Lubavitch
About Chabad Lubavitch
The Rebbe
Headquarters
Magazine
Magazine
News
News & Updates
In The Media
Impact
Social and Humanitarian
Social and Humanitarian
Education
Education
Community
Community